This week’s Flashback gives you the opportunity to look at the details of how we have celebrated a few of the past 42 Holiday Seasons, and the photos run the gamut from early Southwest to early AirTran holiday costumes and celebrations. 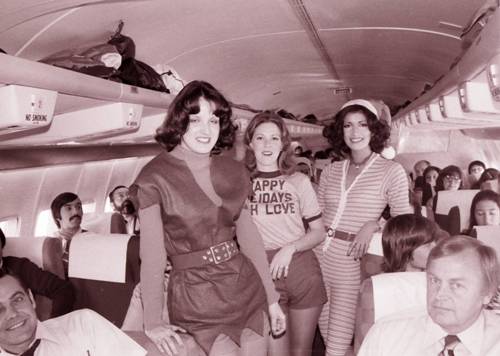 The first photo features a trio of Flight Attendants from the the earliest of the years that Southwest was in operation.  Our characters are wearing an elf’s outfit, a holiday T-shirt with the greeting “Happy Holidays With Love,” and a pajama-like outfit with a Santa cap.  This and some of the other photos are from a time before security regulations prohibited Flight Attendants from wearing costumes.  Note the open overheads and that the only items stowed there are coats.  Judging from the pattern on the sidewalls, I am guessing this was probably either N21SW or N23SW. 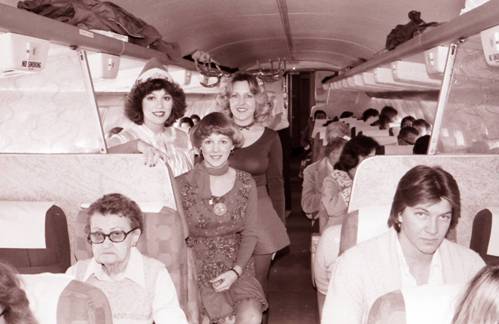 From about the same timeperiod, the next photo also displays a Flight Attendant in a Santa hat.  The Flight Attendant in the middle has a holiday-themed dress, while the rear Flight Attendant sports a reindeer hat with antlers.  Another cabin interior note:  The passenger service units (PSUs) forward of the mid-cabin bulkhead all have “No Smoking” placards, but those aft of the bulkhead don’t.  This is because the aft portion of the cabin was the smoking section.  Also, take a look at the expressions on the two folks seated in front of the bulkhead; they both seem highly suspicious of the photographer. 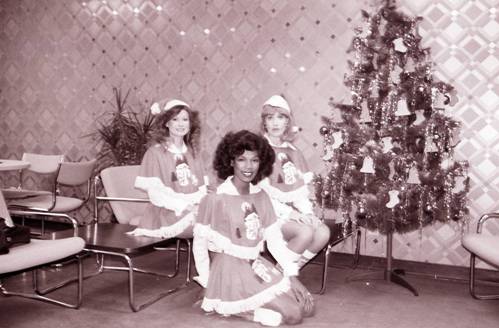 Good things come in threes.  This looks like it might have been shot at the Dallas Inflight Base (or possibly a holiday party) where a holiday costume contest was being held, and this Crew shows off their matching Santa costumes in front of the Christmas tree. 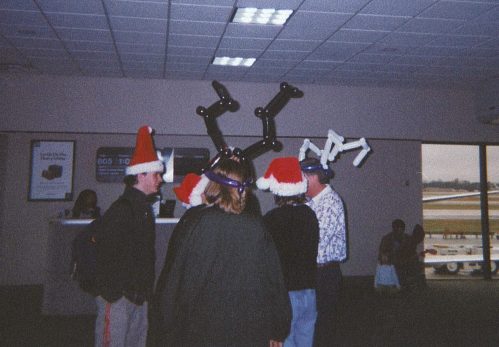 We shift our attention toward the east where we look in on a holiday celebration at Atlanta with AirTran Employees for December 1998.  The costume of choice appears to have been either Santa hats or reindeer antlers made from balloons. 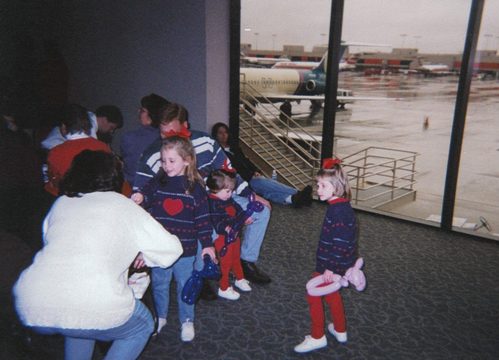 AirTran Employees went through the gate area giving balloon animals to children waiting for their flight, and these recipients look delighted.  Out the window is an AirTran DC-9, with TWA and Delta MD-80s in the background.  All in all, it looks like a miserable, wet day in Atlanta, so the holiday cheer must have been appreciated in the gate area. 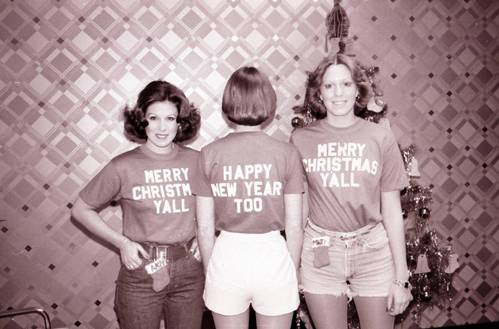 My Christmas gift is the reception you all have given me for these Flashbacks to Southwest’s history.  We will take December 28 off and will see you in the next year for more Southwest history.  To close, we return to that long-ago costume contest for a Texas-style holiday greeting from another Southwest Inflight Crew.  And to their wishes, I add my own:  Happy Holidays Y’all!