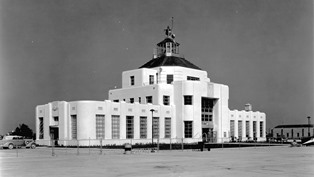 This week marks the 75th anniversary of Houston Hobby’s first modern airline terminal, which today serves as the 1940 Air Terminal Museum.  The art deco facility designed by architect Joseph Finger was made possible by grants in part from the Works Progress Administration towards the end of the Great Depression in 1939.  It featured new amenities such as crew crest areas, a weather station, and air traffic control tower on the roof 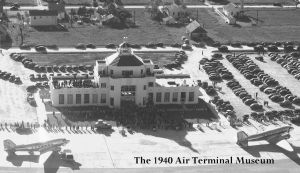 As the jet era approached, a new terminal was constructed close to the site of the current facility, and plans began to get underway for a much larger international airport north of town to replace Hobby Airport completely.  For several years after the opening of Intercontinental Airport, the classic terminal, along with the rest of the airport, became a relatively quiet place following all the airlines moving to the new airport.  It wasn’t until November 1971 that commercial airline service returned to Hobby when Southwest opened what would be our forth station. 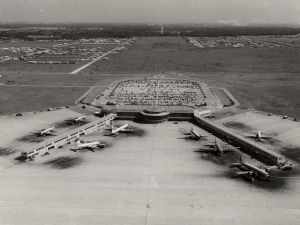 There were several plans to tear down the 1940 terminal over the years, but thanks to the efforts of the Houston Aeronautical Heritage Society, it remains open today as a museum preserving the history of both the facility and Houston aviation as a whole. Several events are also hosted by the museum each year, along with an annual raffle to win an airplane.  In two weeks, international airline service will return to Hobby with the opening of the new five gate concourse.  Along with the classic 1940 Air Terminal, the best of both classic aviation and modern air travel will be represented at Houston’s original commercial facility.
4 Loves