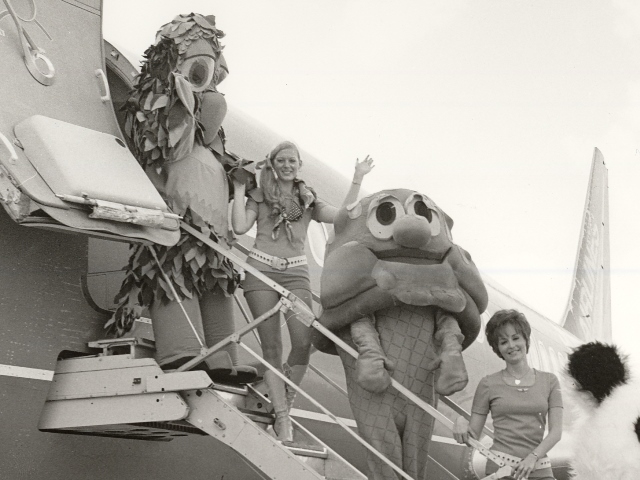 Of the many quirky images within our archive, a few of my favorites are from a 1973 promotion in Houston featuring a few characters from a local retailer celebrating the opening of a new store.  Just like Southwest, the young company wasn’t afraid to make a splash with some creative advertising.   Kids’ Kounty Superfunsuperstore , a big box retailer catering to customers under the age of 12, was in the process of opening  a second location.  “Kharacters” created by the store included Hugh the Shoe, Connie Cone, Peter Panda, and Dirty Bird. Their visit to Hobby in late 1973 was prominently featured in our Southwest Magazine “Love Events” article later that year. 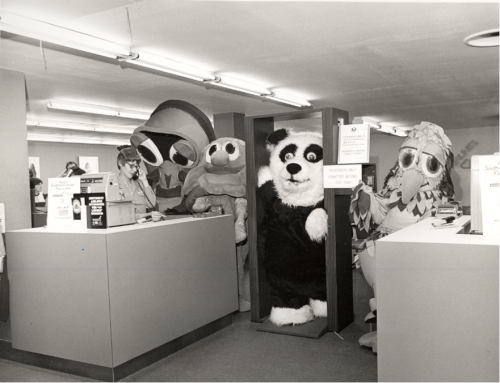 A few things stand out in this particular photo, primarily the magnetometer Peter Panda is walking through.  In the aftermath of D.B. Cooper’s escapades about two years earlier, the FAA had tasked airlines with screening passengers prior to boarding.  This was decades prior to the standardized process in place today, so Employees at our Stations were actually the first security screeners.  The second detail that caught my eye was the $13.00 displayed on the LUV Machine (cash register) – so apparently Peter Panda chose the lower airfare instead of a bottle of Chivas. 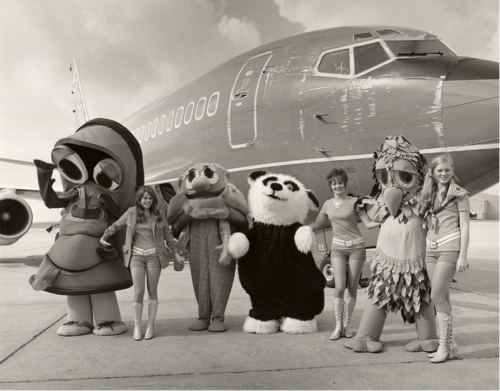 The Superfunsuperstore Kharacters were a big hit in Houston, and although the retailer’s future may not have been as bright as ours, it was a great way to showcase our Fun-LUVing Attitude to our Customers and help pave the way to some of the great brand partnerships we appreciate today.
6 Loves