The matriarch of our flagship fleet, Lone Star One, celebrates its 25th anniversary this week.  The high flying tribute to the home state of Southwest Airlines debuted at a celebration in Austin on November 7, 1990.  Featuring an artistic representation of the Texas flag across the fuselage, the 737-300 pays tribute to the state were it all began two decades earlier.  As we approached our 20th anniversary, Lone Star was a fitting tribute to our humble beginnings in 1971, all the way through attaining major airline status in 1989. 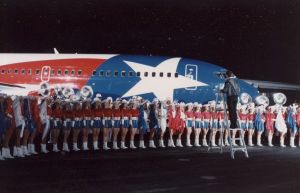 In the quarter century since Lone Star One joined the fleet, eight more flagship aircraft have followed, continuing the tradition of celebrating the communities and People we serve.
Lone Star One Logo ‏53 KB
2 Loves

change of cleaning in cabins during COVID