We’ve all been on a flight and heard the Pilots over the public address system after boarding, but there are probably only a handful of these greetings that anyone remembers after their journey. There is one Captain, though, whose unmistakable welcome, and name, is tough to forget—and he goes by the call sign Mad Dog.  On Sunday, Mad Dog took to the skies for one last time, leaving 117 Customers and Crew of five with a smile and many a tear. 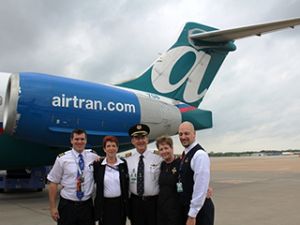 Captain Watson along with his final Crew are pictured above: Brian Hagedorn, Linda Graham, Mad Dog, Jane Steiner, and Luke Shanks.
Mad Dog, or Captain Mike Watson, completed his 52-year career on Sunday in the left seat of AirTran Flight #160 between Houston and Atlanta.  He began flying at age 12 when his brother Jimmy brought him along for a ride in a J-3 Cub over Arkansas.  As excited as he was to fly the plane solo a few weeks later, he had been warned by his older brother not to share the news with their parents.  Being bit by the aviation bug, Mad Dog was commissioned into the Army where he flew both helicopters and fixed-wing airplanes.  Later in his career as an Army Officer, Mad Dog was assigned to a VIP detachment where he transported Generals and other high ranking officials throughout the country. 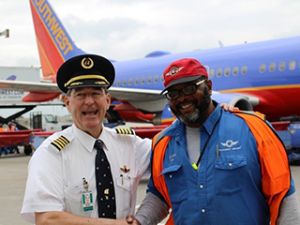 After completing his service to the Army, Mad Dog began flying charters for a company known as Hangar One, which eventually landed him a 727 Flight Engineer position with Eastern Airlines.  Following Eastern’s collapse in 1991, Mad Dog was hired by Express One, which would eventually provide subservice to ValuJet about three years later.  ValuJet began to receive quite a few commendations from Customers regarding Captain Watson but was embarrassed to say he wasn’t actually one of their Employees.  On April 17, 1995, Mad Dog was officially hired by the company, where he remained through the transition to AirTran Airways in 1997. In January 2004, he commanded AirTran’s final DC-9 flight and transitioned to the Boeing 717. 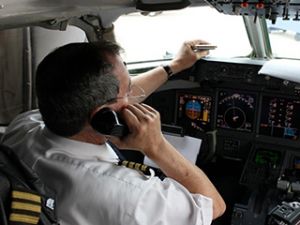 As most any AirTran Airways Employee could tell you, Mad Dog is well known throughout the Company by his harmonica-accompanied greetings.  But thanks to his quick thinking and outstanding Crew Resource Management skills, Captain Watson etched his place in AirTran’s history on August 8, 2000 when he saved 63 lives on a 13-minute flight from Greensboro, NC.  While in command of Flight #913, an electrical fire broke out and quickly filled the flight deck with thick smoke.  Flying the aircraft completely by feel alone (he couldn’t even see the controls in front of him,) Mad Dog coordinated with his Crew to prepare the aircraft and Passengers for an emergency landing back at Greensboro, where he safely landed the plane and initiated an evacuation.   Although the fire rendered the aircraft a total loss, everyone on board escaped with only minor injuries.  The company, still recovering from the tragedy in the Everglades four years earlier, would likely not have survived had it not been for Mad Dog and his Crew.  This also earned him his AirTran Excellence Award later that year.  Mad Dog honored by former AirTran CEOs Joe Leonard and Bob Fornaro 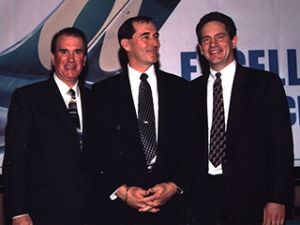 Mad Dog with former AirTran CEOs Joe Leonard and Bob Fornaro
Even though we will no longer hear Mad Dog playing “Bad to the Bone” from the left seat of one of our flights, it doesn’t mean he won’t be taking to the skies anymore.  One of his retirement goals is to purchase a classic biplane, such as a WACO or Stearman. 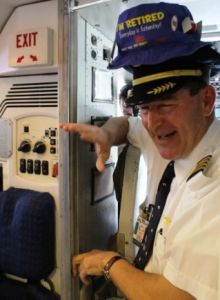 When asked about the highlight of his career, Mad Dog pays tribute to all of the wonderful People he has had the privilege of working with over the years, which is also what he says he’ll probably miss the most.
18 Loves
2 Comments

richard_waldron
Not applicable
We had him as a pilot for our trip to San jose. We still remember him to this day and was hoping we would have him one more time. This man is a model pilot and should be the standard of all pilots. He made a 8 hour trip feel like a breeze, especially when we had a rocky approach into mdw. Good luck and best wishes to your future endeavors mad dog
0 Loves

I was on flight 913 that fateful day of August 8th, 2000! Mad Dog saved our lives. He is a hero, and I wouldnt be here today to tell this story had it not been for his cool, calm, decisive action that day.

I hope he got a chance to buy the Bi Plane he talked about in the article.