blusk
Not applicable
I’ve been spending a ton of time lately looking over our photo collection (and trying to organize the beast), and these photos have two things in common:  they were taken in the mid-70s, and they all involve Love Field.

We start with a photo that was taken before Love Field underwent its first modernization with the addition of the current silver façade.  The first photo depicts the original red and green exterior from 1958.
When the other airlines moved to the DFW Airport in January 1974, the main lobby wasn’t needed by Southwest for our relatively small number of flights at the time.  The City of Dallas used the expanse of the main lobby to open an ice skating and roller skating facility called “LLOVE.”  Take a look at the small blue sign under the “FI” in “FIELD.”  That is the sign for the skating center.  I am still looking for photos of the interior of LLOVE, but I haven’t been lucky yet. 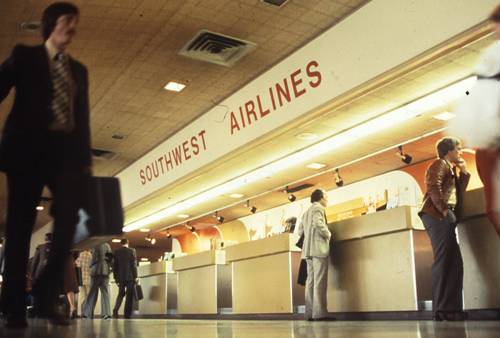 Now, we move inside and take a look from the floor up at our ticket counter in the original baggage claim wing.  Again, when the other airlines moved out, the original ticketing wing was on the other side of the empty lobby, so our ticket counter moved to the baggage claim wing to be close to our gates.  Even though the counter was in a new location, it utilized the interior façade (the area with the Southwest name) and what looks to be the ticketing positions from the original ticketing wing.  (Can anyone confirm that these items were moved to this area?)  I hope you can see how dirty the ceiling is, but remember that, back then, smoking was allowed everywhere in the building. 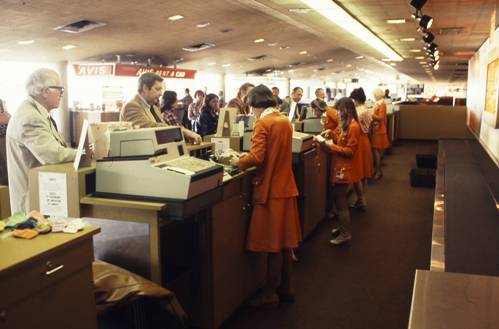 Let’s move around behind the ticket counter to see our Ticket Agents (that was their title back then) serving our Customers.  When talking about this era at Southwest, most people mention our Flight Attendants, but our Ticket Agents also were exclusively female the first years.  Their uniforms were similar to the Flight Attendants.  This photo offers an oblique view of the departure board, and it appears there are about 20 or so daily flights.  Illustrating the consolidation of the airport facilities that I mentioned previously, the rental car counters are across from the Southwest counter, and beyond the far end of the ticket counter is the claim area. Not only does this photo document a moment in time of the building’s history, it documents our Employees in their work day from long ago.  Regular Flashback Fridays readers know that I am partial to these “slice of life” candid photos from our early days.  Here are three additional photos in that vein from the same era. 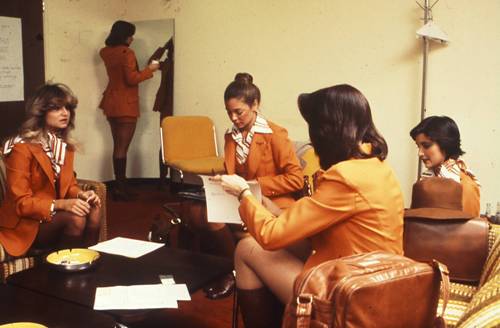 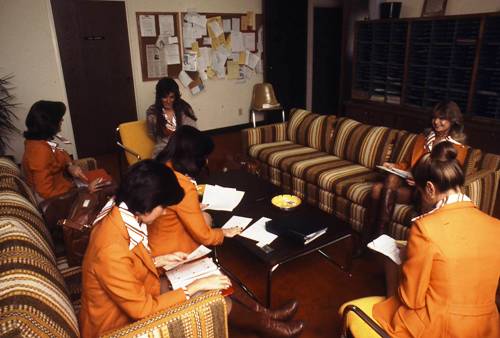 The uniforms in these two photos were introduced in 1977, so that helps us date the scenes.  Above is a view of the lounge from the other direction.  The Flight Attendant at the front left is updating her manual, and it looks like the manual for the Employee on the right is on the coffee table.  On the wall in the background is a bulletin board, and my guess is that it probably has stuff for sale and requests to trade lines.  Like the photo of the ticket counter ceiling, the ash trays on the table reflect a different attitude toward smoking. 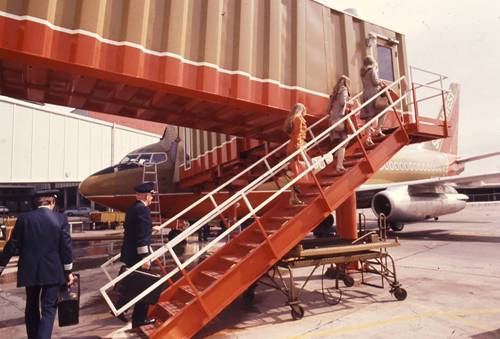 The candid work shot above is from a slightly earlier era than the others.  My guess is that it was taken not too long after the airlines moved to DFW in 1974.  We see a Flight Crew beginning their work day as they climb the stairs up to the cab of the jetbridge.  (Note that the jetbridge was had a paint scheme similar to our aircraft livery.)  Because two of the Flight Attendants are wearing coats, the day was probably chilly.  The aircraft is N24SW, and since that airplane was delivered on September 18, 1974 (my 22nd  birthday), we can probably narrow the date down a bit more to the fall of 1974 or winter of 1975.
Fast forward to years after these photos were taken—Love Field is in the midst of a massive rebuilding; our Employees long ago exchanged hot pants for slacks and polo shirts; and our first 737-800 was recently delivered.  There is one thing that hasn’t changed though, and that is the Warrior Spirit of our Employees as they go about their daily duties.
280 Loves
3 Comments

rodney-s
Not applicable
Wow Brian, are you psychic? How do you know that is N24SW? I guess your copy of the photo is much higher resolution than the one we see on the web, but zooming in I can't find a hint of the tail#s.
15 Loves

blusk
Not applicable
Rodney, not psychic, just had a high res original to work from. The blog format requires low res photos
16 Loves