As I go through the archives, I find interesting photos that I want to share, but sometimes there aren’t enough photos on a specific subject to which an entire Flashback Fridays can be devoted.  So, I save these “onsies” and “twosies” to present in periodic grab-bag posts, and that is what we have this week. 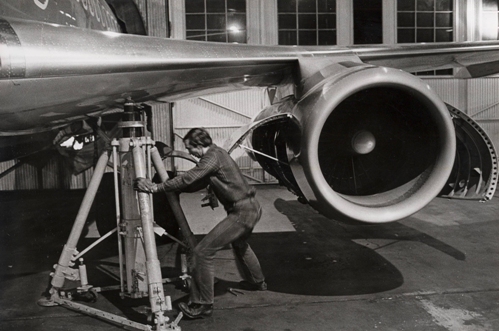 Regular readers know how much I treasure “slice of life” photos that show our early Employees going about their work days, and I have a great example in this first photo.  It was taken inside our original hangar up on the north side of Love Field close to Bachman Lake.  We see the Mechanic positioning a jack underneath the left wing of one of our original 737s.  Because he’s pretty well bundled up in non-uniform jeans and a woolen shirt, we can surmise it is winter, and the old hangar was pretty drafty on those cold nights.  Another clue to the season is that the hangar doors are closed.  Look to the upper left of the photo, and you can see the cutout in the hangar door that fits around the fuselage because an entire 737-200 wouldn’t fit into the hangar.  Consequently, the tail had to stick out into the elements.  Behind the Mechanic, the cowling on the JT-8D engine is open. 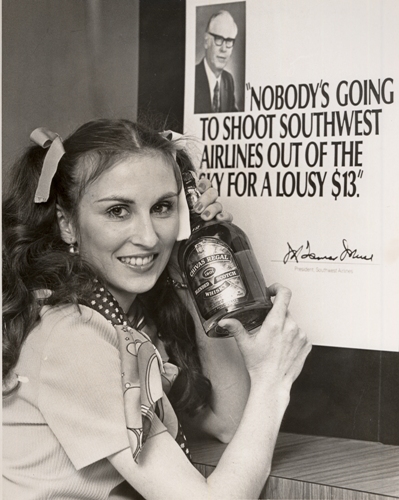 Another familiar story to Employees and fans of Southwest Airlines is the 1973 $13 Fare War, when Southwest gave Customers the choice of paying the discounted fare of $13 that Braniff was charging between Dallas and Houston Hobby (which was priced way below our breakeven point), or of paying the regular full fare of $26 and receiving a bottle of premium liquor.  This story has always reminded me of the scene in It’s a Wonderful Life, where George Bailey has to parse out just enough money to the savings and loan members to keep them going until Mr. Potter reopens the bank, at the same time his is protecting the stability of the savings and loan.  If everyone had paid $13, Southwest would have quickly gone broke and out of business.  If Southwest only offered a $26 fare, we would have lost most of our Customers to Braniff’s lower fare, and Southwest would also have gone out of business.  Either way, Braniff would have won.  As it turned out, we came up with a third alternative, and Southwest became the number one liquor distributor in Texas during the sale.  The $13 Fare War was really a turning point that helped move Customer support in favor of Southwest, and we have turned a profit every year since.  Above, we see Dallas Ticket Agent Georgeann Harris holding a bottle of Chivas Regal in front of a poster of Lamar Muse’s, “Nobody’s going to Shoot Southwest” ad. 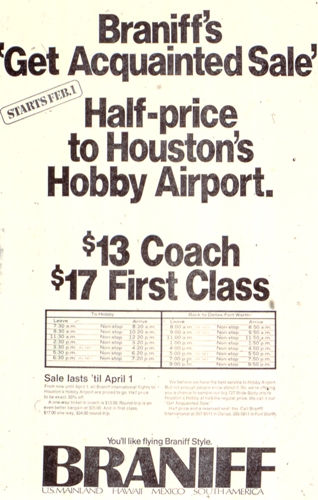 But have you ever seen anything pertaining to this pivotal event from the Braniff perspective?  Well, this is the Braniff ad proclaiming the start of their $13 “Get Acquainted Sale” between Houston Hobby and Dallas, and it represents the trigger for the battle.  Braniff was not only offering a coach fare that could put us out of business, but we forget that they were offering first class for $17, which was $9 less than our coach fare.  If that wasn’t enough, there was another component to their attack.  As the ad shows, they were offering the $13/$17 fares on eight Dallas-Houston flights and seven return flights.  With that kind of flight frequency and those fares, this clearly was an attack on Southwest’s key route.  But wait, there is still more:  You probably can’t read it, but the ad proclaims that you will be flying on “big 727 Wide-Body jets.”  This rather far-fetched claim no doubt references the new wide-body style overhead bins that Braniff had installed on its 727s (and which we were installing on our 737s), but it conveniently ignores the fact that the 727 and the 737 have the exact same cabin width—and neither are considered to be a wide-body. 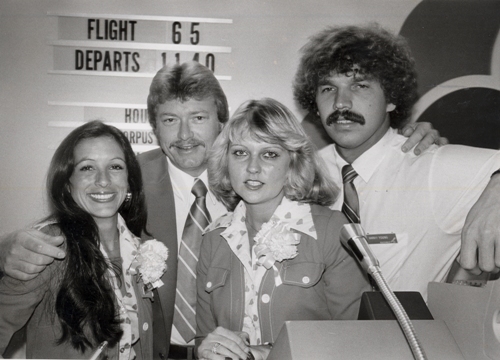 Another miscellaneous photo that I uncovered is this photo from the Austin Station that was probably taken close to the time we began service there in 1977.  The photo evidently documents an important occasion in the life of the young station as both women are wearing a corsage.  Harry Young is on the right, Rhonda Krafka is next to him, then Steve Foster, and Suzi Marcella is on the left. 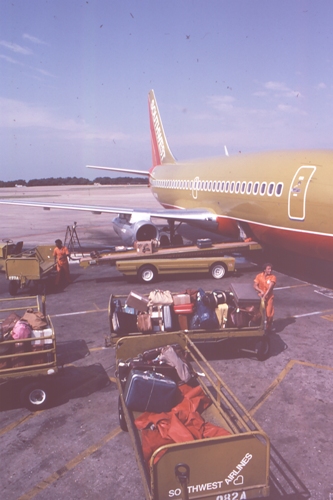 We close with this late 1970s ramp shot of a quick turn.  The aircraft is the second N20SW, which was delivered to us in 1977.  The first N20SW was the airplane we had to sell to the original Frontier in 1972 when we were prohibited from flying out of state charters, and it flew its entire Southwest life carrying the word “airlines” on the fuselage.  On the other hand, the aircraft in the photo joined our fleet in 1977.  But notice how the original slanted titling on the baggage carts continues in use on ground equipment long after it disappeared off our aircraft.

So maybe there is an overall theme to this post after all.  It shows how we worked, how we marketed ourselves, and how we battled to stay in business during the early days.  Although the specifics have changed over the years, these are still hugely important parts of “who” we are as a Company.