I’m excited because Flashback Friday is on a roll of finding images hidden for decades.  Last week, we found some photos of Reservations Agents from 1974, and a short while back, we had Mechanics in our original hangar.  Well this week, we have some amazing candid photos of our original Dispatch office.  Like our CS&S (formerly Reservations) folks, Dispatch isn’t seen by the public, and early photos, especially candid ones, are pretty rare, so this was an exciting find for me.  Let’s turn back the clock to 1974 (and in some respects much earlier), and take a look. 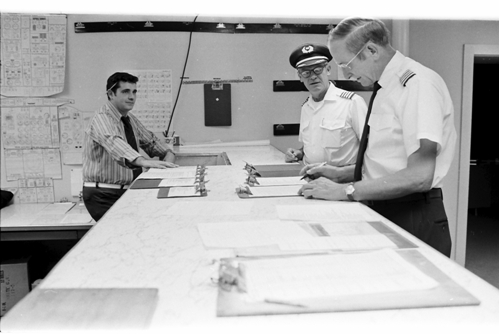 Before we get into the details of the photo above, just take a moment to look at it.  You could go back through the history of airlines like PanAm, or United, and for years, their Dispatch Offices looked just like this.  This is a room in which the late, great Ernie Gann would have felt at home.  Just out of sight would have been banks of teletype machines typing out pages of weather and other operational information.  That would have been accompanied by the static of a tube-powered air to ground radio.  This office was located in our original building on Love Field Drive.  (This building served as the Love Field passenger terminal until the late 1930s, so it’s possible Charles Lindbergh or Wiley Post may have stood in the same spots as our Pilots in these photos.)  Original Dispatcher, Scott Johnson, tells me that the office was “remodeled” several times before Southwest moved its Headquarters off the airport to an office complex on Regal Row.  He says this was the “last version” of the office before moving in early 1974.  Those are walls of real wood, not the temporary walls most offices have today.  The tabletop has an aerial map, probably under glass.  Captain Warren Hampton (without hat) could be either reviewing the weather reports or his flight plan, while Captain Jim Everett looks on.  At this time, we still only flew between Dallas, Houston, and San Antonio, so one of them is probably heading for Houston and the other San Antonio.  Paul Quinn is the Dispatcher. 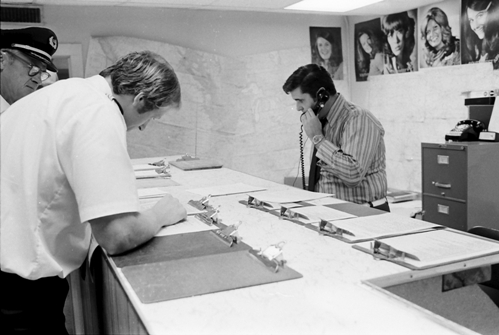 Next we look from the other side of the room.  We really didn’t need the map of the US hanging on the wall since it would still be four or five years before we flew beyond Texas, but it serves as a portent for things to come.  The posters of Southwest Flight Attendants on the wall, were also used as backdrops for our ticket counters.  First Officer Gabona, who apparently is flying with Captain Everett, has joined the crowd.  The clip boards on the table would have contained weather observations of terminal weather and winds aloft, terminal and en route forecasts, and any NOTAMs (Notice to Airmen), which provide information about possible runway construction, terminal construction, equipment outages, etc. 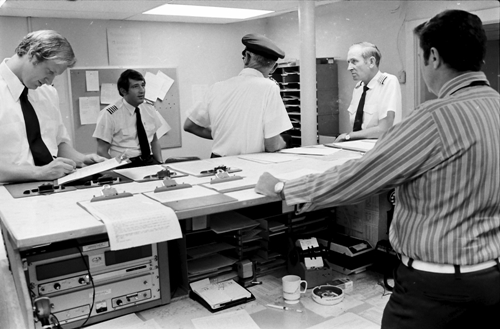 Moving the camera behind the desk gives us this view.  The tube air-to-ground radio is at the lower left.  Captain Sam Cohn has joined the discussion.  I tried to date the photo by enlarging it to look at the calendar on the desk.  The day of the month is the 12th, and the month’s name is a long one, so that would probably date it to October, November, December, January, or February.  Paul Quinn was hired in October 1973, so it has to be after that, and the offices moved in 1974, so it is a short window. 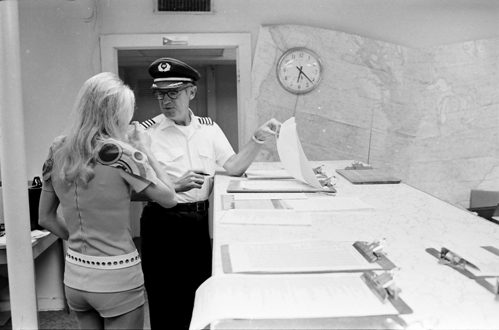 Further helping to date the photos, is this Flight Attendant in the original uniform, which was worn until late 1974.  She, no doubt, is checking with the Captain on the kind of ride he is expecting.  The bumper sticker above the door reads, “Fly Southwest.”  We get a better look at the map in this photo, and it could be covering something on the wall. 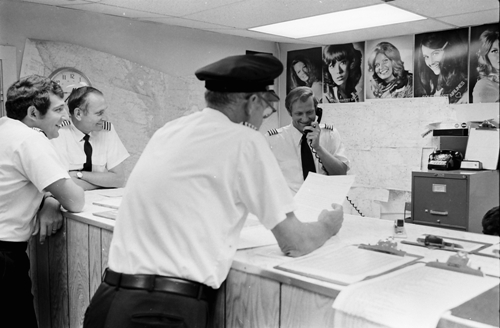 While this photo doesn’t cover any new ground as far as details go, I think it is a great photo to end with because it captures a moment in a work day 38 years ago.  It’s a wonderful illustration that our Original Employees went about their daily routine in much the same way we do.  They had no idea of the legacy they were creating, and to me, that’s why their accomplishments are so amazing.  For help with the identification of the location and the people, special thanks to Dan Johnson, Willie Wilson, and Scott Johnson, all Original Employees.

Jeffry
Not applicable
WOW; interesting to see where you've come from. Today, I'm sure the room is full of flat screen TVs/monitors. I also find it interesting that you had no female pilots in the picture back then. I know that has changed now; thank you.
10 Loves

Jeff_Elofson
Not applicable
Too funny! I can remember not too many year's ago, probably around 2000, when your marketing or communcations director wrote an article in the SWA In flight magazine that claimed she would never communicate with customers using e-mail, etc. At the time, I thought it was rather ironic as SWA had one of the best websites available but I could not communicate with you by e-mail. Now, you are blogging! Never say never! Best! I haven't had the opportunity to fly much lately and, frankly, miss it. Used to fly to and from Chicago every week for 3 years.
12 Loves

Mark_Mattingly
Not applicable
Things have changed a lot in 30-some years. How many flight attendants would wear the uniform today that they wore back then? I'm sure glad that Southwest flies beyond Texas today!
13 Loves

Kel
Not applicable
I certainly enjoy these "Flash Back Friday" photos. As a youn man I hung out at IPT and had the pleasure of seeing many legendary aircraft like, DC-3' Connie's, Electra's, Martins, Convairs and more. While the history of Southwest of course doesn't go back that far, or in pa it is still a great memory jogger. One thing just crossed my mind was when the FAA used a DC-3 for approach testing watching that bird scream over the main at IPT. Thanks Southwest!
11 Loves

Ray_Phillips1
Not applicable
In your Flashback Friday post dated July 22.2011 'Dispatch Office' you have misidentified Captain Jack Cardwell as Captain Everett. I knew both gentlemen quiet well from working as a mechanic on their planes...
12 Loves