Flashback Fridays: Puttin' on the 'Ritz 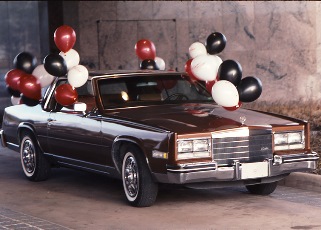 Earlier this week, we learned about our LUV Seat repurposing efforts, which utilize leather from our Spirit cabin interiors for a variety of items benefiting communities around the world.

These materials became available as our fleet was modernized with our new Evolve interior starting in early 2012. While our LUV Seat efforts see former seat covers turning into new items such as shoes, backpacks, and soccer balls, we once had a program that included our interiors being appointed into another means of transportation—a 1984 Cadillac Eldorado. Starting in the summer of 1983, a new leather interior was tested on three new -200 series aircraft recently delivered from Boeing.  The all-leather arrangement brought the total seat count up to 122 and featured three lounge areas.  Once the decision was made to implement those changes throughout the entire fleet of 41 aircraft, a multi-month campaign was launched to advertise the new product.  Part of the initiative included a promotion called “Puttin’ on the 'Ritz,” a sweepstakes which Customers could enter to win a variety of prizes, including a new 1984 Cadillac Eldorado Biarritz, customized with new Southwest Airlines leather and carpeting.  Other prizes included briefcases also adorned with the new Southwest leather, one of which would be awarded to a lucky winner in each of the 21 cities we served at the time.

Over 410,000 entries to the contest were submitted at ticket counters throughout the system.  When Herb reached into the barrel of entries to pull a winner at random, he selected the card submitted by Tulsa resident Lawrence Robinette.  Herb then presented the keys to the new Cadillac inside the Tulsa airport, and Robinette drove it home right through the front door of the terminal, where television crews had gathered to film the moment. The Puttin’ on the ‘Ritz promotion turned out to be widely successful, and the beautifully adorned car and briefcases went on to create quite the buzz about our new leather interiors.
1 Love

Should I change my available funds over to points?