Flashback Fridays: Right to the Source About Houston Hobby

Twice before, I have led myself astray when I thought I had uncovered photos from Houston Hobby in the early 1970s.  Compared to Dallas or San Antonio, our archives have little to reflect our early operations at Hobby.  Well, those days are over, and I uncovered these amazing photos.  Having actually flown into the airport when it was Houston International, I knew the scope of the building’s facilities.  These photos don’t look like anything such a busy airport would have offered.  Dan Johnson in Dispatch, and who was a very early Operations Agent at Hobby, helped set me straight, and in the process we discovered something even more historically significant:  The photos were taken during a pivotal point in Southwest's history when the survival of the Company was in real danger.  Upon looking at the photos, Dan e-mailed me:  “That is most definitely Hobby.  When we reopened airline service at the older airport in late 1971, Southwest was located in the old international building attached to the main terminal.  In fact, it was (it’s gone now) just before the road/ramp went up to the main building.  We did not have jetbridges, and all boarding.was at ramp level."  The photo above looks like the baggage claim at a small-town airport instead of one of the nation’s biggest cities.  Ramp Agents just rolled up the door and set the bags inside the terminal.  The photo above shows a few bags left unclaimed.  The ticket counter is straight ahead, and the outbound waiting area for the gate are the seats to the right.  If you look carefully, you can see the edge of the Braniff ticket counter next to ours. 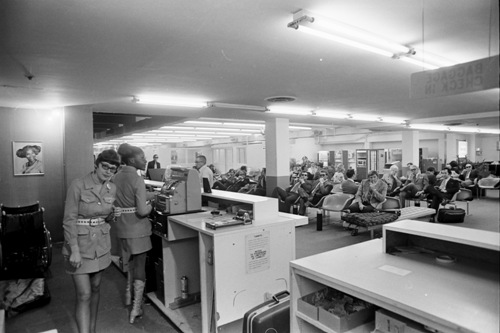 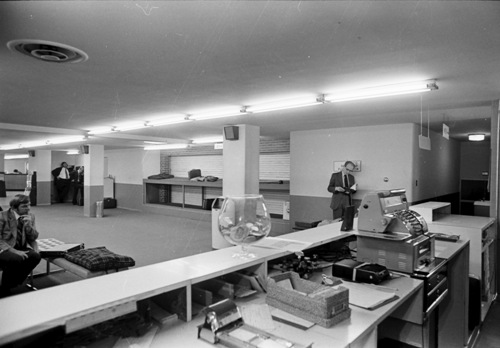 Looking back the other direction, we see a man patiently waiting for his boarding announcement.  The gate doorways are directly in front of him.  Dan remembers the building’s less than ideal ergonomics:  “So imagine if you will, those low ceilings, the inbound Passengers mixing with the outbound, trying to get their luggage while the outbounders were trying to get through that small opening that led to the ramp.  It was the most crowded mess and loud stressful wild and wooly time you can imagine.”  Note how the cash register that dispensed the tickets (as receipts) dominates the counter. 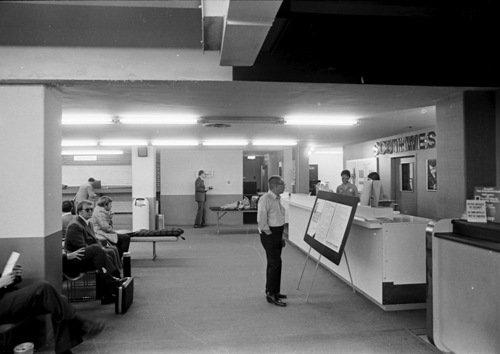 If the age of the photos wasn’t special enough, take a look at the one above.  Two items date the scene to a very critical point in Southwest’s history.  The poster to the extreme right on Braniif's counter announces a “Get Acquainted Fare.”  Braniff had cut our fare between Houston and Dallas in half, and while neither airline could make a profit on that low a fare, Braniff had “deeper pockets” and could wait us out to either take all of our Customers at that fare or for us to go broke matching their fare.  Our response is on the big easel in front of the Southwest counter.  It includes the famous advertisement where our President, Lamar Muse, proclaims that “Nobody’s going to shoot us out of the sky for a lousy $13.”  Southwest gave our Customers a choice, they could pay the $13 fare, but if they paid the full fare of $25, we would give then a fifth of premium liquor.  Since most of our Customers were on expense travel, they paid the full fare, put it on the expense report, and took the bottle home.  During this summer of 1973,  we became the largest distributor of Chivas, Crown Royal, and Smirnoff in Texas.

When he spoke about Montgomery's victory over Rommel at El Alamein, Winston Churchill said: "Now this is not the end. It is not even the beginning of the end. but it is, perhaps, the end of the beginning."  The same was true going forward for Southwest.  Crisis and battles loomed all over Texas and beyond, but the $13 Fare War established Southwest as the underdog in many folks’ minds. The airline had turned the corner, and 1973 became the first of 38 consecutive years of annual profitability. 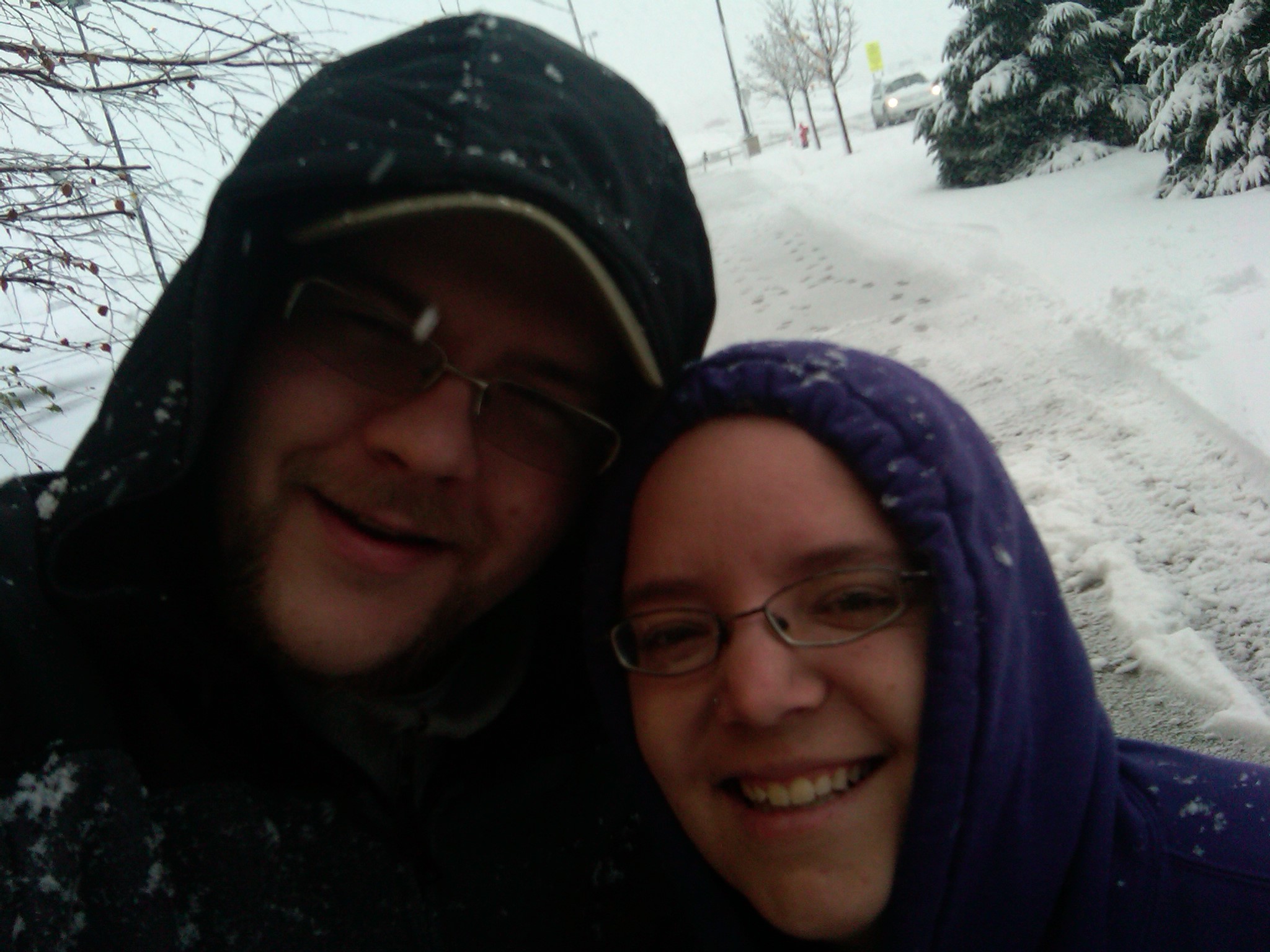 pacotechguy
New Arrival
Just one question: in the picture with the gentleman waiting for his flight; there appears a bowl on the counter. Could anyone tell what this is? is it baggage tags? Mints? Something else? Just a little curious about the large deep bowl; and why it would be sitting on the counter there... Great story! Thanks for the history! One thing I LUV about this Blog!
22 Loves

James_Sullivan
Not applicable
Great old photos - I didn't realize Southwest was located in the old international annex when HOU service began. Do you know when the main (upper level) terminal was reopened for operations?
24 Loves

blusk
Not applicable
Pacotech guy, The main terminal opened in the mid to late 70s. When I find the dates/photos I will post them. James, The jar is full of business cards. My guess is that we then had them laminated into bag tags.
23 Loves

Scott_Zrubek
Not applicable
I remember when I was in 2nd grade, probably in 1972, my class got a tour of a Southwest Airlines plane. I remember thinking it was the coolest thing, as it was the first time I was capable of remembering being on an airplane. I'm pretty certain that it was Astronaut David Scott that got us the tour, somehow. His son was in my class at the time.
19 Loves

Helen_Stinson
Not applicable
I was in high school in the '60s and a cheap date night activity was to go to Hobby and stand on the observation deck/roof and watch planes take off and land. The other fun thing was when they had a "walk-on" fare. You just got on the plane, took your seat, and the flight attendant came around to accept your payment. No reservations, just first-come, first-served. We used to wonder what would happen if we just walked on, the plane took off, and they found we had no money? Remember, teenagers aren't that bright!
21 Loves

jmcatlin
Not applicable
I spent many a day in that terminal when my dad (William "Bill" Catlin) would bring me to work with him.
24 Loves