We’ve covered the landmark day of January 13, 1974, before in previous editions of Flashback Fridays.  Those earlier posts have shared pictures of the abandoned Dallas Love Field lobby after the other airlines packed up and moved to the DFW Airport.  Just as the other airlines shifted airports overnight, Southwest consolidated our operations into the old baggage claim wing and what was American’s “West Concourse” over the night of January 12/13.  This week, we have photos and an advertisement that were made shortly after the “big move.” 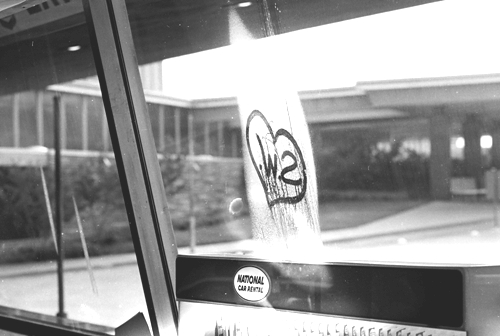 I’ll admit that this photo has puzzled me for a while because it is across the street from the baggage claim wing, looking back toward the main lobby entrance.  Up until recently, I thought it was the inside of a rental car shuttle bus because there is a rack holding National Car Rental folders.  Reinforcing that thought is the condensation on the window where someone has drawn that they “heart S.W.”   However, upon a closer look, I realized it was a building, but I didn’t remember any building being across the street from the terminal. 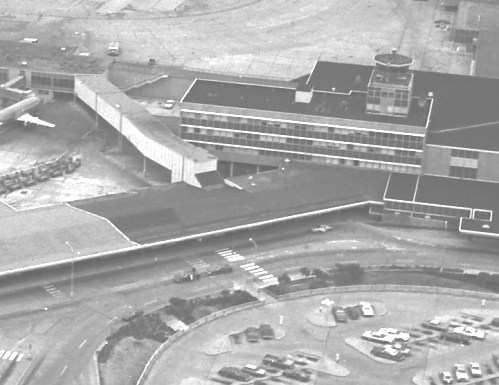 This slightly later aerial view (above) has the answer.  The little building across the street from the terminal and to the right of the white crosswalk in the center of the photo has to be the location of the previous photo.  My guess is that this was the booth where folks picked up the keys for their rental cars.  All of the sight angles and landmarks in the two photos match. This photo is also interesting because it shows how the lobby is shaped around the building's three-story office section. 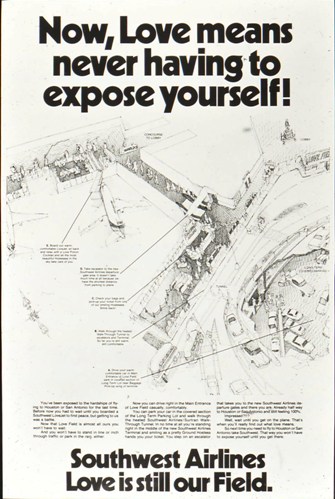 In a form of self-disclosure, let me say here that I am a longtime freak for anything featuring a “cutaway” display.  Ant farms provided endless fascination as a kid, and I built plastic models showing the insides of a nuclear submarine and a P-51 Mustang.  I especially love those big travel agency style airliner models that show the interiors of the “bestest and latest” airliner of the time, like an Electra, a DC-8 or a 747.  Flight and Air International magazines from the UK would feature cutaway drawings of significant historical aircraft, and I would pour over every inch of each drawing.  That’s why this Southwest ad from February or March 1974 immediately caught my attention.  Besides the cutaway, there is the “double entendre” headline based on the “Love means never having to say you’re sorry” slogan of the hugely popular 1970 film, Love Story.  In Southwest’s case, “Love (as in Love Field) means never having to expose yourself (to the elements).”  But even though I love a play on words, the cutaway drawing is the highlight of the ad. 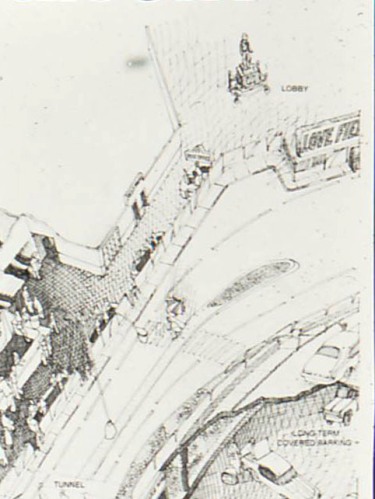 In this portion of the drawing, only the Texas Ranger statue is shown in the lobby.  This area would later become the LLove Entertainment Center (which included an ice rink) for a few years before the main lobby reopened to passengers in the 1980s. 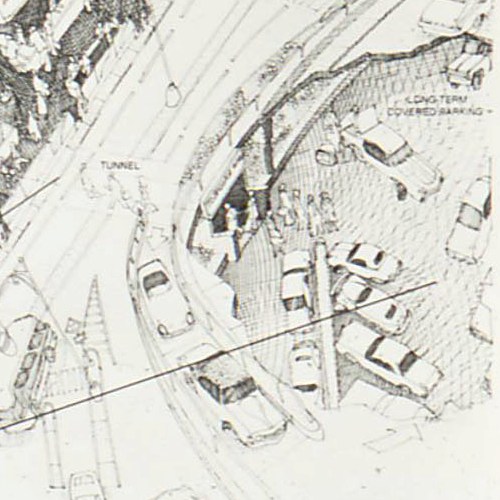 Here we see the lower level of the parking garage (before the current multi-deck facility was built).  In 1974, there was a tunnel that connected the old parking garage with the baggage/ticketing wing. 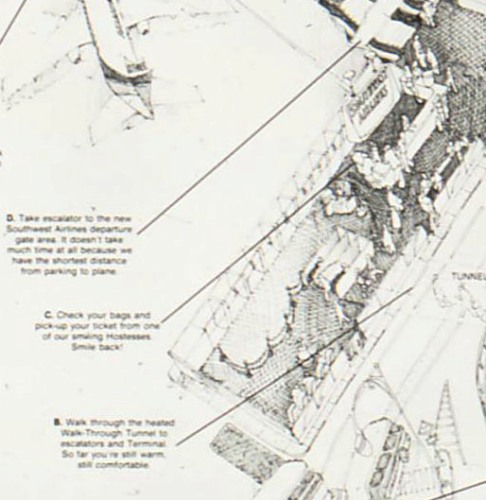 Next, we see the Southwest ticket counter, where the ad points out that you can “Check your bags and pick-up your ticket from one of our smiling Hostesses.  Smile back!”  The ad continually sells the fact that you are keeping warm by staying inside.  That’s the tip-off that this is winter.  The last thing you would be selling in a North Texas summer (or spring or fall, for that matter) is “keeping warm.” 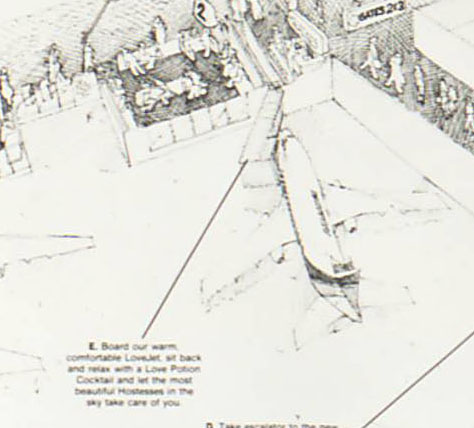 On the concourse, we have a cutaway of Gate 2.  And again, the ad talks about boarding “our warm, comfortable LoveJet.”  The covered second-floor walkway between the ticketing/baggage claim area and the concourse is still in use as the exit from the concourse.

The closing copy brags about the fact that you will never have to “stand in line or inch through traffic or park in the rain, either.”  (Obviously, the copywriter had never tried to navigate Mockingbird Lane through the Park Cities to Love—it even was a traffic nightmare back then.)  You can “step on an escalator that takes you to the new Southwest Airlines departure gates and there you are.  Already half way to Houston or San Antonio and still feeling 100%.”  Keep in mind that the new DFW Airport allowed a Customer to virtually park in front of their aircraft and walk across the street and board--although this would quickly change when individual gate security checkpoints gave way to central access through two or three locations in a terminal.  Many area airline customers remembered lengthy walks through crowded concourses at Love before DFW opened.  Even Southwest's Customers who stopped at the ticket counter in the middle of the old ticketing wing had to walk all the way across the main lobby and then well out onto the North Concourse before January 13, 1974.  The first sentence above recognizes that "getting to us was a battle."  So, you have to put this ad into that context, and it really takes on two messages:  One is that Southwest is a better choice than the other airlines, and the other is that Love Field is the better airport choice because travel at Love had gotten a lot easier and quicker once everyone moved to DFW.

The current Love Field terminal has gone through many major changes since it was completed in 1958, and this advertisement really celebrates the facility at its lowest level of usage.  After this 1974 facility contraction, the terminal would return to a pattern of growth.  Harlingen flights would be added in 1975, followed by other cities across Texas and the surrounding states.  Today, the 1958 Love Field building is being rebuilt into a modern terminal that will serve the air travel needs of the future when the Wright Amendment finally “goes away” in the fall of 2014.  The new ticketing wing opened on November 1 of last year, and part of the new concourse will open in a month or so.  Final construction will be completed early next year.  This ad and these pictures are historical records of what air travel from Love used to be like.

blugoose
Explorer C
Great article on DAL. It will be sad to see the old terminal go, but at the same time it is exciting to see the new one open. Will the original moving walk ways be staying or going? Is any of the old terminal being kept after the new on opens? I thought it was mentioned somewhere that a small part is going to still be used for something other than its current use. blugoose
8 Loves

blusk
Aviator C
Thanks, blugoose, All of the original concourses will be razed, in fact, only the West Concourse that we are using now is still standing, and it had a later model of a moving sidewalk that was installed when American double decked it in the late 1960s. The office tower and the main lobby will remain, although the lobby is being extensively updated. However, it will retain the iconic mosaic floor map of the world, and the Texas Ranger statue will be moved back into it. A small portion of the Braniff terminal (where the walkway from the ticketing wing joined the concourse will remain for some airport offices. Until the new concourse is completed United and Delta are using two of the former Braniff gates.
10 Loves

dalluvr
Explorer C
What happened to all of the neat Braniff stuff that was in the South terminal? The Herman Miller chairs, Alexander Calder ceiling pieces, etc?
0 Loves