I’ve devoted a lot of space in these Flashback Fridays postings to airplanes and airports.  That’s not surprising because I love both of those two subjects, and I think that many of you also share my fascination.  But, as John Cleese says on Monty Python:  “Now for something completely different.”  The inspiration for this week’s effort came to me while I was looking through a bunch of digital photos that I hadn’t seen before.  I found the photos below that look at the evolution of the way Southwest Airlines sells tickets over the years.  And the cool thing about the photos is that some of them are in airports—Love Field for most of them.

When Southwest started, our ticketing system was an incredibly simple idea that we had borrowed from PSA in California:  Ring up the sale on an old fashioned cash register and use the receipt as a ticket receipt and boarding pass.  To fit in with our early, and admittedly suggestive, “Love Theme,” we called the cash registers “Love Machines.”  The view below is from when the Love Field Ticket counter was located on the baggage claim wing from 1974 through the early 1980s.  You can’t see it because of size limitations, but the Customer Service Agent has just rung up a $25 ticket.  The credit card imprinter is to her right, and to her left is the tiny reservations computer.  (Just to put airline computer technology in the proper context, at the time this photo was taken, I was working for Delta in Oakland, and we were using IBM Selectric typewriters as our computer terminals.)

Not too long after this scene, the terminal building was being remodeled, and during construction, parking was very limited.  Back then, you either bought your ticket from a travel agent or you went to the airport to purchase your ticket at the airport ticket counter.  The large airlines did offer a third option in some of their bigger cities.  City ticket offices (CTOs) were located in downtown areas and in some major hotels.  Southwest didn’t have CTOs so the construction would make it doubly difficult for folks to buy tickets in advance.  The solution was to update the CTO idea, and during the construction, we opened a drive-thru ticket office at the corner of Mockingbird and Cedar Springs at the entrance of the airport—see below.  Customers could stay in their cars as they purchased their tickets.  (That’s Colleen Barrett at the far left of the photo.

Since many of our Customers are business travelers who are always pressed for time, we wanted a way to speed their travel through the airport.  I started at Southwest in 1995, and I have always known the machine below as a “Quicket,” but as you can see from the ad copy, it was introduced as the “Quickie” dispensing “Quickie Tickets.”  The ad is a late example of our suggestive advertising, but it makes the point that you could buy your ticket quickly.  All you had to do was 1) insert your charge card, 2) select your destination, 3) choose one-way or roundtrip, and 4) head to the gate.  The machines were limited to just fullfare tickets and were primarily for same-day purchase and travel.

Ticketless (and a lack of repair parts) pretty much made the Quicket obsolete, but today’s kiosks are a cousin of the old airport ticketing machines.  While they don’t issue tickets, they do things the Quicket never could do like issue boarding passes and bag tags.  Here is an early version of one of our kiosks. 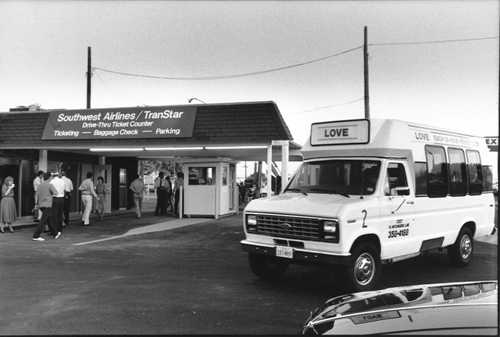 And since we opened this with a “behind the counter” view of our early Love Field ticket counter, I thought I would close with a modern look at one of our counters.  Instead of a cash register (oops, sorry a Love Machine) receipt, the Customer Service Agent has a computerized boarding pass and bag tag in her hands.  Aside from the cool early photos, I hope this Flashback Friday edition shows that in spite, or maybe because of, new technology, the one constant is our People, whose goal is to get you through the airport as quickly as we can and with a smile on your face. 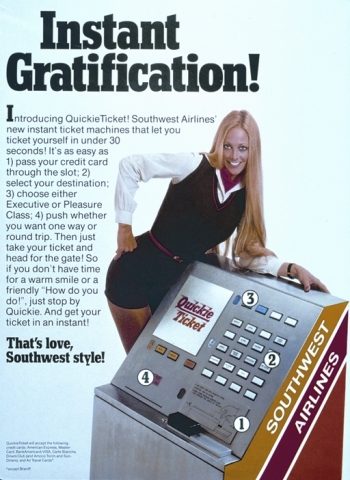 David_Ciani
Not applicable
That brings up a good point: why can't you buy tickets at the kiosks? They have the credit card readers built in, so it seems like it would be just a software thing.
139 Loves

Carol_Holmes
Not applicable
When do you think Southwest will be in GSP? Anxious to have you.
141 Loves

Michael_Bludwor
Not applicable
I used the "Quicket" on a regular basis back in the day. I thought it was great! It took longer to park than to get a ticket and run for the gate! No problem! I do miss last minute travel - even though it cut a deep furrow in the wallet!
139 Loves