Throughout our 39 years of operation, Southwest Airlines has been involved with many famous fare wars, but some of those conflicts have been more local in nature.  This week, our guest author, Teresa Laraba our Senior Vice President Customer Service, takes us back to a fare war "on the border."

Most recently, a Fare Sale has meant a rush to the Internet by our Customers so that they can  snap up the sale fares on  southwest.com.  But back in late 1984 and early 1985, we still had cash registers (also known as NCR machines) to dispense tickets at our ticket counters, and the Internet did not exist.

I was a Customer Service Supervisor in El Paso and America West had just come to town.   With Phoenix as their home base, a no-prisoners taken fare war began for the competeingservice between El Paso and Phoenix.  I recall a few days in a row during this period when the fare dropped numerous times in a single day as it volleyed back and forth between us and them.  We even had Customers walking back and forth, just waiting for the fares to drop to trade in their tickets for lower priced ones which resulted in downgrades as low as one or two dollars each.  We would have to refund the "high-priced" ticket, and ring up a new one for each downgrade.

Our Employees were so excited to fight for the “cause,” and even though it was a lot of work, each Customer captured from America West meant a longtime Southwest Customer.  No question about it, our Warrior Spirit was shining through.  And, I guess we know who won that fare war?

Although the visuals below aren't from the exact time of which Teresa writes, we wanted to share them because they are from our opening service in El Paso in 1977, and the bottom clipping tells of an earlier fare war. 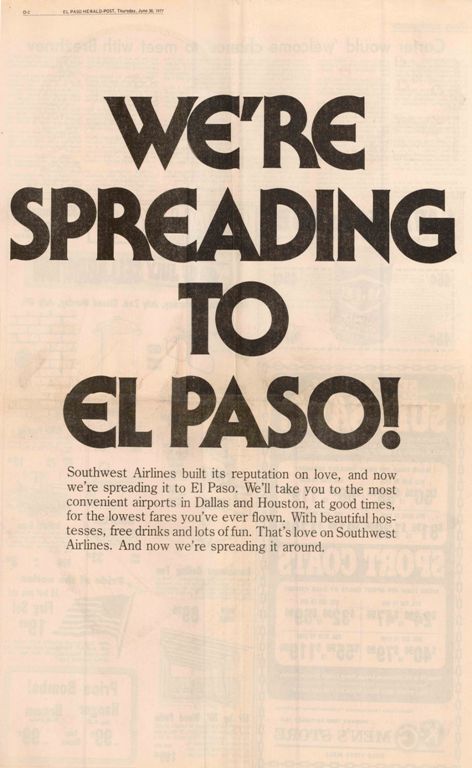