Our new Evolve interior with its environmentally friendly materials and Customer-friendly personal space was set to make its debut this week.  To mark the occasion, I thought it might be interesting to go back through the years and look at our various aircraft interiors.

The photo above represents one of our earliest interiors, and the Flight Attendant is one of our Originals, Sandra Force.  I like to call this a “707 interior” because it is very similar to the ones on Boeing’s 707s that entered service in 1958 and 1959.  The one big difference between those 707s and early 737s was that the 707 had big ceiling light fixtures, not unlike today's Sky Interiors, and the 737 just used indirect lighting.  There are no overhead bins, just an open rack that was limited to coats, hats, pillows, and blankets.  The signature Boeing PSUs (Passenger Service Units) hang underneath the shelves.  The row number was displayed in the square frame on the aisle-side of the unit.  The grill on the PSU contains a speaker for the PA system, and next to it are the “No Smoking” and “Fasten Seat Belts” lights.  Reading lights and air vents are on the bottom of the units, and the emergency oxygen masks would drop out the door on the center bottom. 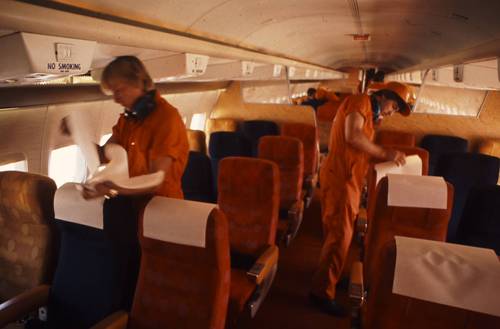 Here’s a color view of that same interior, and it shows off the colors of the cloth seat coverings.  The “No Smoking” placards on the front of the PSUs help divide the cabin into smoking (aft) and non-smoking (forward) sections.  The low bulkheads are in front of the overwing lounge section (a feature on Southwest aircraft until the 737-700 was introduced), and the cleaning crew is replacing paper headrests. 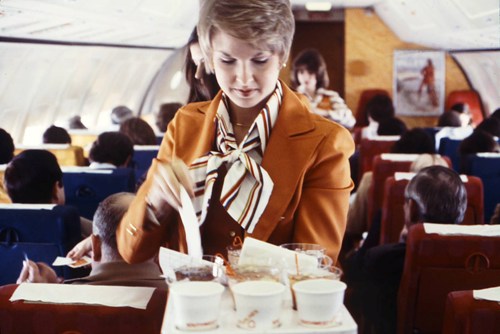 For the next photo, we look at a variation—the “widebody” look.  When the 747 was introduced, it was one of the first aircraft to have an enclosed overhead.  Boeing developed a similar overhead for the 707, 727, and 737.  The enclosed overhead bins folded into the side of the ceiling, and the largest item they could contain was a briefcase or large purse.  The PSUs were incorporated flush with the bottom of the overhead bins. 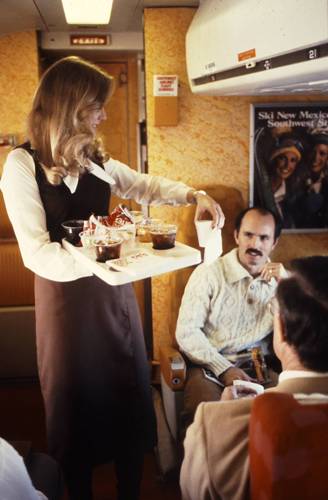 The next big step in cabin evolution was enclosed overhead bins that could accommodate carryon bags.  This photo dates from the early 80s, and the enclosed bins are now large enough to contain another 80s invention, the roller bag.  We are looking at the lounge seating at the front of the aircraft.  In this photo and the previous one, we can see that the bulkhead space was utilized for advertising.  In all of these early photos, the seating has remained pretty much the same with cloth covers and paper headrests. That would change with our next interior design. 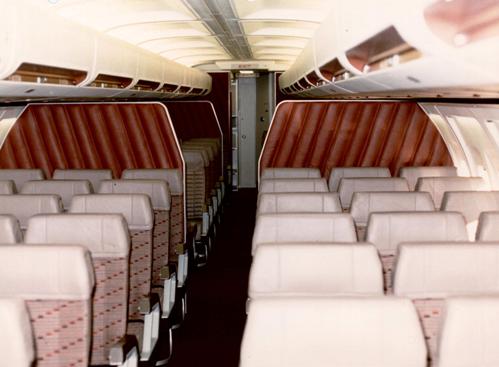 When Southwest introduced the 737-300 in December 1984, it debuted the basic interior that would serve us up into the early “aught” years.  This interior featured cloth backs and bottoms with permanent leather headrests replacing the paper ones.  The lounge areas were set off with leather bulkheads.  When Southwest introduced the 737-700 in January 1998, new federal safety regulations doomed the lounge areas.  No rear-facing seats could meet this new safety requirement, and the -700s were delivered with all forward facing seating.  Lounges in the -300s and -500s were phased out, and only the -200 retained lounges until they were retired at the start of 2005. 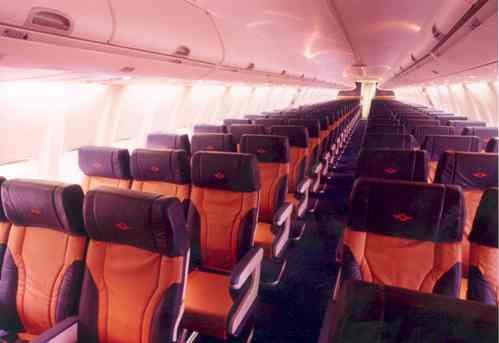 The new Canyon Blue livery debuted at the start of our 30th year in early 2001, and we introduced matching all-leather interiors with complimentary colors.  This interior has “evolved” into our new Evolve interiors which will carry us forward for the upcoming years. 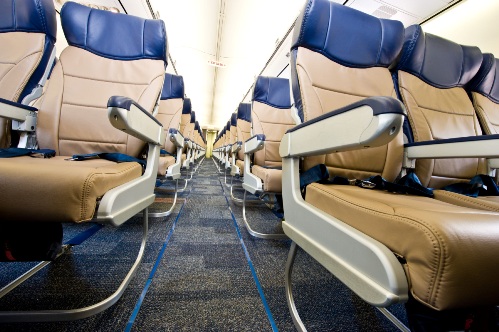 Besides eco-friendly fabric, the seats feature lower profiles, new tray tables, and redesigned seat back pockets.   The Evolve interior's carpets are of a new design that utilizes sustainable materials.  The carpet is laid in squares which can be replaced without having to replace long rolls of carpeting.

sforsyth
Not applicable
Will the 717's from AirTran be fitted with Evolve seating during their conversion process and what will the total seat count and spacing be? Thanks!
16 Loves

ps
New Arrival
I love the current livery and the positive changes to the seating design and comfort. The previous styles were still nice and I was lucky enough to enjoy the rear-facing seats in the lounge areas. With all my travels, I only came across this seating arrangement with Southwest and I enjoyed it.
25 Loves