When Southwest began operations in 1971, it was toward the end of the war in Vietnam.  Many of our younger male Employees were Vietnam vets, and many of the older Employees who came to us from other airlines were World War II and Korean War Vets.  Our appreciation of those who served our country by marching, flying, or sailing into harm’s way was evident pretty much from “day one” of our operations.  It’s not surprising then that one of the favorite spots for Southwest’s early publicity photos has a military connection.  It also doesn’t hurt that the photos include our Flight Attendants. 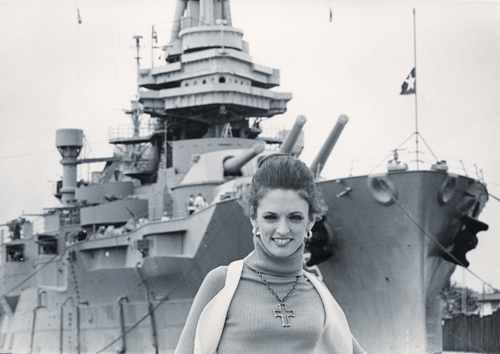 That spot is the San Jacinto battleground outside of Houston, and it is where Sam Houston defeated Mexican General Santa Ana to secure Texas’ independence.  The San Jacinto Monument figures in some of those publicity photos.  Also located at the battleground is the battleship, USS Texas.  Here in a photo from 1971 or 1972, we see one of our original Flight Attendants, Mary Skwarlo, standing in front of the Texas.  This ship has an amazing history, having served in both World War I and World War II.  When she was launched in 1912, the Texas was the most powerful weapon in the world.  During the first war, also known as “the war to end all wars,” the Texas served alongside Royal Navy ships based at Scapa Flow in the northern Scottish islands.  We have forgotten, but the battleship was the most feared weapon in the world during the first part of the 20th Century.  After World War I, the victors signed a treaty limiting the size and number of battleships the world’s countries could build—much like we have signed similar treaties about nuclear weapons today.  This had the side effect of helping spur the development of the aircraft carrier. 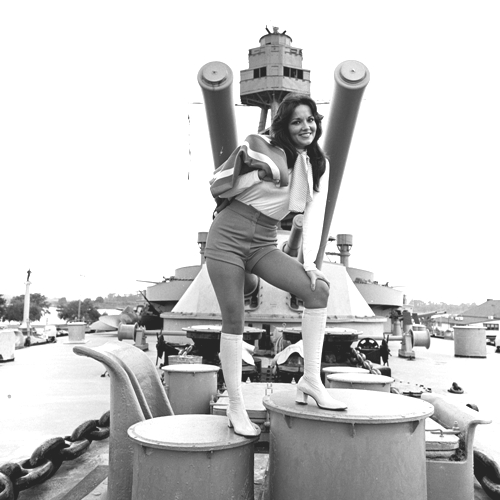 We returned to the Texas a year or so later for more photos, and this time, Flight Attendant Chris Winslow is posing on the ship’s foredeck, underneath two of the ship’s ten 14-inch guns.  The measurement refers to the diameter of the shells fired.  More modern battleships like those of the recently retired Iowa class used 16-inch guns with even bigger shells.  Each battleship shell contained a massive amount of explosives.  Imagine a shell weighing the equivalent of an original VW Beetle being shot 20 nautical miles through the air at almost 2,700 feet per second, and it’s no wonder that, during the first Gulf War, many Iraqi troops occupying Kuwait feared the Missouri and Wisconsin more than any other weapon. 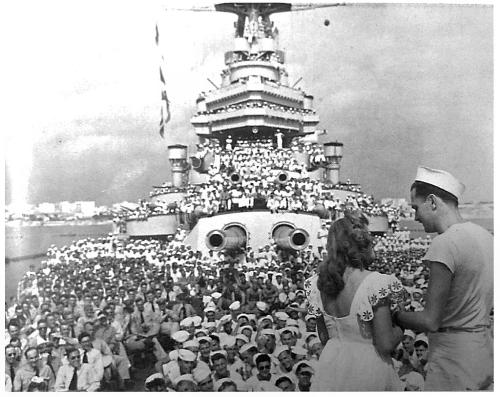 Chris’s location on the foredeck is a traditional spot for entertainers visiting battleships.  In the 1936 Busby Berkeley movie, Born to Dance, Eleanor Powell and a host of dancers perform in this spot on a battleship set that was built on a back lot.  In a scene reminiscent of this movie, Cher recorded her 1988 video of “If I Could Turn Back Time” on the foredeck of the Missouri.  During World War II, the picture above shows a USO troupe performing for the sailors of the Texas in a similar location on the ship.

More than a photo backdrop or a video set, the Texas was a warrior.  It is the only remaining battleship to have served in both world wars.  During World War II, it was a part of some of the most crucial and bloodiest battles of the war.  After supporting the landings in North Africa, its big guns were in the waters off Omaha Beach in Normandy during D-Day.  A German coastal battery scored two hits on the ship, but it was quickly repaired.  In 1945, those big guns prepared the beaches of Iwo Jima and Okinawa for the Marine landings.  After the war in 1948, the Texas came home to its namesake state as a museum.

Besides the Texas, several newer battleships built just before or during World War II are on display around our system.  The New Jersey is displayed at Camden, across the river from Philadelphia; the Massachusetts is at Fall River (near Boston); the Wisconsin is docked at Norfolk, Virginia; the Alabama is at Mobile (close to Panama City, Florida); and the North Carolina is at Wilmington (closest to Raleigh-Durham).  As to the Texas, this gallant veteran of two world wars is in danger of being destroyed after resting for over 60 years in the Houston Ship Channel.  A project is underway to move the ship to a dry dock to serve as her permanent home.  If all goes well, the project will be completed in 2017, a little more than 100 years after her launching.  (For more info, click here.)  Several generations of sailors fought in this ship to protect our freedoms.  To those veterans who sailed in the Texas and all her sister ships, we thank you.