While going through our archives, our Intern, Lauren Webb, encountered a group of materials belonging to a Southwest effort that hasn't received a lot of mention in our current materials.

We all know about the important place women played in Southwest’s early marketing in the form of hot pants-clad Flight Attendants (called Hostesses back then). But what about the other important women in Southwest’s life—secretaries? We’ve had no shortage of fantastic secretaries in Southwest’s own corporate history, from Colleen Barrett’s beginnings as Herb Kelleher’s legal secretary to the most recent winner of the Heart and Soul Award, Sharon Rankin, who is the Executive Assistant for my department’s Vice President. But particularly in these early years, secretaries across Texas were vital to Southwest’s business model, and we showed our LUV through programs and publications targeted specifically for them. 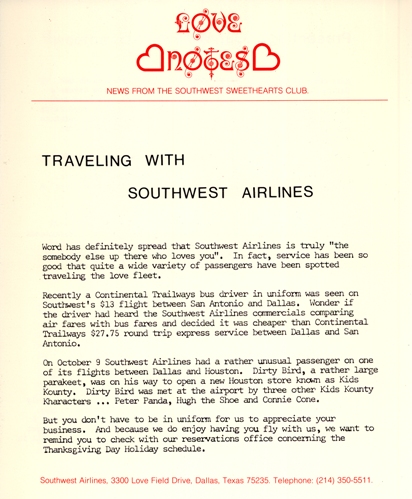 Southwest Airlines’ original target audience was business men in need of short, affordable flights throughout Texas on a consistent schedule. In order to attract this business, it was important that Southwest ingratiate itself with the secretaries who booked this travel. Southwest created the “Southwest Sweethearts Club” in November 1972. Secretaries earned a flight coupon for each one-way flight they booked for their boss through Southwest. Fifteen coupons earned a one-way trip “on a ‘love jet,’” but just four round-trips entered a “Sweetheart” into a raffle for vacation. 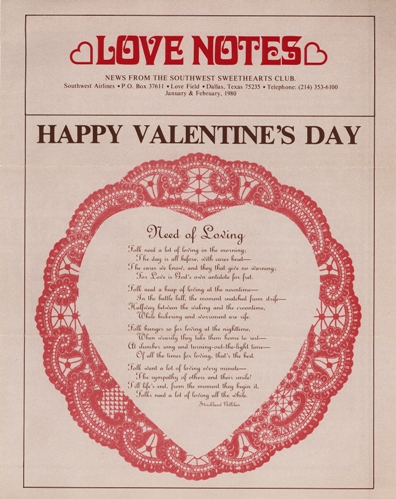 As one of the member benefits, Sweethearts received Love Notes, the club’s monthly newsletter (above). This humble publication  announced the raffle winners and informed members about new openings and using their club benefits. And as we would expect from a Fun-LUVing company, they included feature articles on recipes, area social events, and beauty advice. 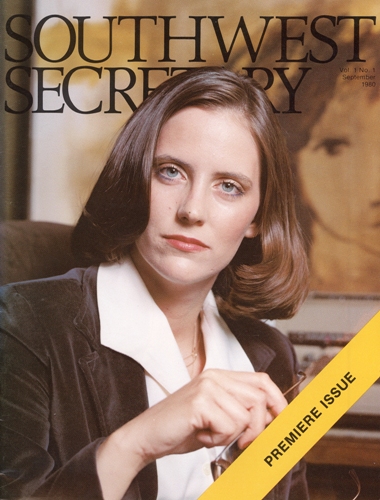 Until 1980, the newsletter was a short, four-page spread. But in September of that year, the Southwest Sweethearts Club became the Southwest Secretary Club and began publishing a full-size magazine, Southwest Secretary (above). In this first issue the Publisher told members: “The airline attributes much of its remarkable growth to the region’s secretaries, and this new club and new magazine are expression of gratitude.” With a self-proclaimed mission to “celebrate that fact each month through an informative and entertaining mix of articles,” Southwest Secretary featured articles on fashion, restaurant guides, career building, recipes, etc.  The first issue included a feature on Kay Martin, then executive secretary to the president of Tesoro Petroleum Corp. (which remains headquartered in San Antonio today). The practice of profiling a new secretary in a feature-length article each issue would continue across the duration of the magazine. 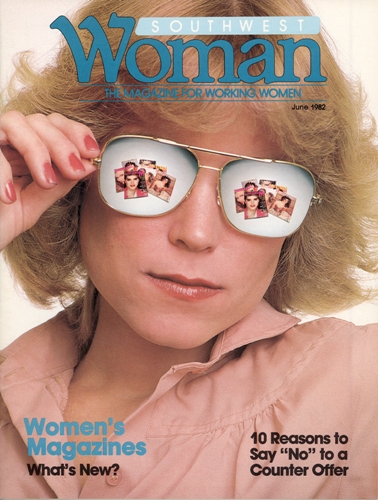 In May 1982, the magazine changed again—Southwest Secretary became Southwest Woman. The Editor wrote that, although it continues to be a magazine for secretaries, “our editorial purpose is to appeal to secretaries as women first and secretaries second.” Then with honesty characteristic of Southwest, concedes that the change was due in part to a marketing decision—“a more general editorial approach will command a more general (and larger) audience.” The magazine’s content stayed more or less the same—lifestyle and fashion articles dominated the pages—but the features on individuals branched out to include women in a variety of career fields.

As the lifeline to our biggest Customer group in Southwest’s early years, secretaries were necessary to our early survival as a Company. And although we no longer publish magazines dedicated specifically to the profession, they will always hold an important space in Southwest’s history.

why no more non stop flights from any San Fran airports to Baltimore?