We continue our “June is our Birthday Month” posts with some artifact gems that Phoenix Flight Attendant and fellow Southwest Avgeek, Rick Covington, shared with me.    (I postponed our look at the 1974 Love Field moving day until next week.)  Let’s begin with the notice below from Dun and Bradstreet.  Even though it carries a stern warning about reproducing, I am hoping that since 41 years have passed, they won’t mind. 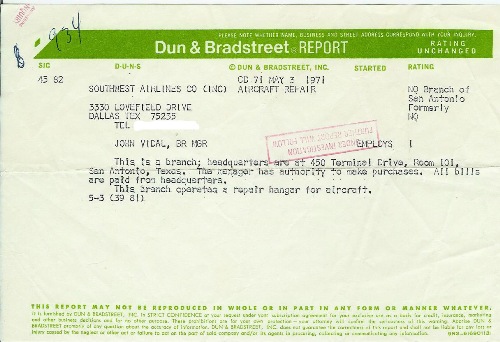 In my mind’s eye, I have always assumed that Southwest’s Headquarters have always been in Dallas.  But when you consider that Cofounders Herb Kelleher and Rollin King both lived in San Antonio, it would make sense to headquarter there at least until we got off the ground.  It looks like our first permanent “residence” in Dallas was our Maintenance Base, which was located on the north side of Love Field in an old 1920s era hangar.  This notice from May 3, 1971, lets everyone know that the Dallas Hangar is a “branch office,” and our first Vice President of Maintenance, Jack Vidal, was considered to be the “Branch Manager” with purchasing authority. Does this show that Dallas Maintenance is the first and most senior work group in Dallas? 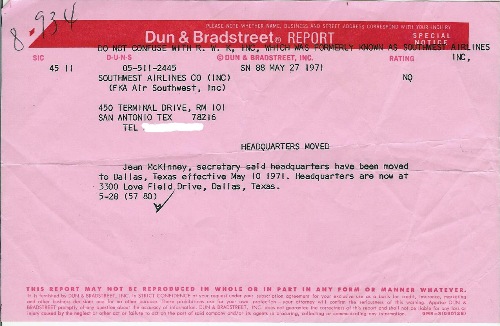 As the next notice shows above, the Headquarters moved to Dallas a week later on May 10, about a month before Southwest would begin service on June 18, 1971.  A couple of other interesting items are on this notice:  Under the “Southwest Airlines, Co (INC)” at the upper left is a note saying we were “FKA (formerly known as) Air Southwest, Inc,” and under the red strip at the top is a warning not to confuse this version of Southwest with the one operated by “R.W.K, Inc.”  RWK is Rollin W. King, and it refers to the earlier Southwest Airlines that he operated with Beech 18s from San Antonio to point in South Texas. 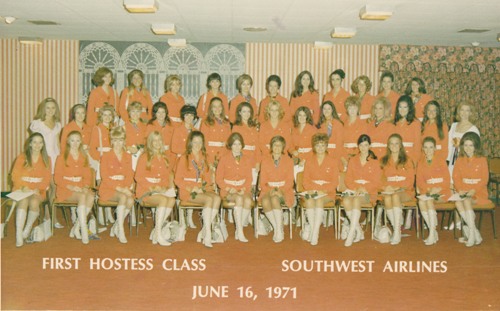 The photo above from the Southwest Archives compliments Rick’s items, and it shows our very first Flight Attendant (Hostesses then) graduating class.  At least three of the women in the picture are still Employees. 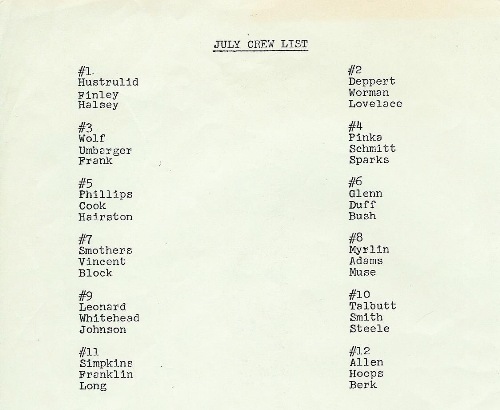 Rick has the flight attendant roster for our first full month of operation, July 1971.  The 36 Flight Attendants are split into Teams of three.  There wasn’t a lot to choose from in the way of routes—every line contained Dallas to San Antonio and Dallas to Houston trips.  Only the days off varied. 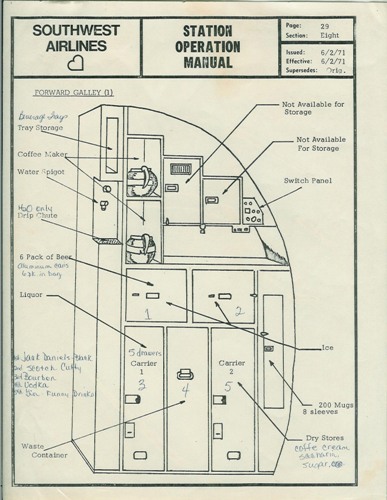 Even more amazing because items like this are usually trashed to avoid confusion when updates are issued, Rick has the original galley stocking charts from June 1971.  The image above shows the stocking requirements for the front galley.  Someone has written his or her own notes to show where additional items were stored.  “Carrier 1” contained Jack Daniels, Cutty Sark, Bourbon, vodka, and gin plus “funny drinks.” 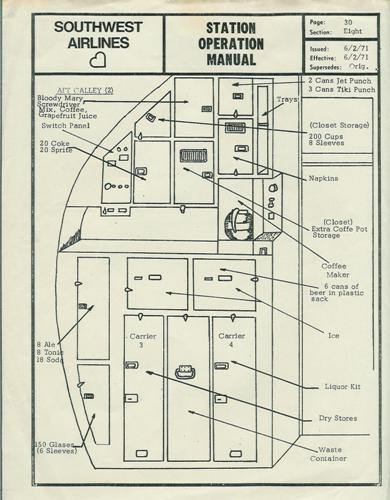 The aft galley contains only basic soft drinks—Coca Cola, Sprite, ginger ale, tonic water, and club soda.  Juices and Bloody Mary mix are at the top.  On the right are provisions for “Jet Punch” and “Tiki Punch.”  Rick asked Original Flight Attendant Pinka about these mystery drinks, and she remembers that Tiki Punch was a tropical punch concentrate that was mixed with water in the coffee pots and served during taxi-out on the ground.  Jet Punch was mixed with alcohol, and evidently Flight Attendants added their own personal versions of mixers.  Pinka also remembers that the tropical punch was “a mess” because it was so sticky.

Thanks again to Rick sharing part of his collection.  On June 18 remember our Original Employees and all they did to make Southwest Airlines what it is today.  Next week, we will have rare moving day photos … for sure.