In the tradition of caring and giving back, a special mission was launched in September 1995 to give thanks to rescue workers and volunteers who responded to the bombing of the Oklahoma City Alfred P. Murrah Federal Building earlier that year.  Called the “Thank You America” Tour, a special aircraft nicknamed Oklahoma One embarked on a cross country journey recognizing the countess first responders and volunteers who rushed to the site of the tragedy to help those in need. 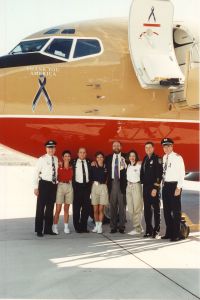 At the Dallas Maintenance Hangar, a special tour decal was applied to the nose of one of our newest aircraft, with stops planned in Oklahoma City, New York City, Washington, DC, Los Angeles, and Phoenix.  Captains Greg Crum and Ken Gile, both Oklahoma natives, were selected to fly the 5,000 mile mission.  At the first stop in Oklahoma City, Governor Frank Keating and Mayor Ronald Norick joined the 70 Employees also taking part in the trip to the other stops along the tour.  At each city, Oklahoma One was greeted with balloons, banners, and Southwest Hospitality from the other Employees who traveled separately prior to its arrival.  Community leaders and elected officials also came out, including President Clinton who attended the ceremony in Washington. 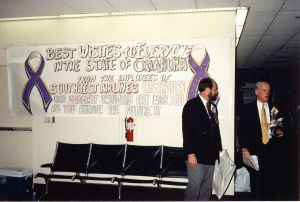 Four-color ribbons symbolizing the recovery being made by the state and city were distributed during the tour, while also paying tribute to the 168 people who lost their lives in the bombing and the countless others whose lives would be forever changed.  A deep sense of pride was shared by everyone involved in the tour, after aiding in the initial recovery efforts and the long term care in the months and years that followed.  As Herb said, “It’s only fitting that we help Oklahoma say thank you to the men and women who worked tirelessly at the scene from around the country.”
1 Love