Customer Support & Services (CS&S) is our department formerly known as Reservations.  These hard working folks with the pleasant voices on the phone have been an essential part of our success since day one, but because Customers interact over the phone with them, they never get to see them in action like they do our Airport and Inflight folks.  I am also sorry to say that there are gaps in our archives of pictures of Reservations hard at work in the early days.  That’s why I was so excited to discover a big manila envelope with “Early Reservations History” written by hand across the top.  Inside are these three very early photos taken in what I think was our first Dallas Res Center. 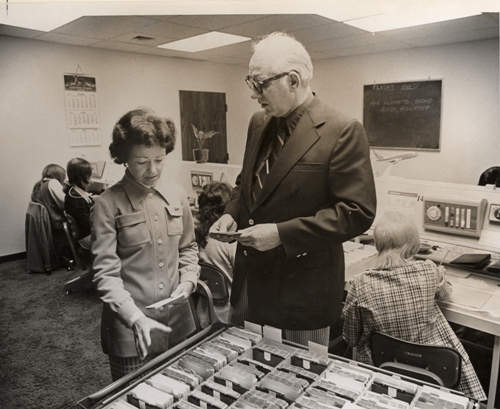 The occasion for the photos was a notice in The Southwest Airlines Magazine, our original inflight publication that was entitled “MORE PHONES TO SERVE YOU.”  It goes on to explain that due to a “rapid increase in passengers, Southwest is rapidly increasing the number of telephone lines to reservations.”  There are so many interesting gems of information in these photos, let’s take the time to explore each individually.  The first photo above shows Bill Franklin, one of our first three Vice Presidents, and Geri Campbell.  Today, we would say that the box in front of them represents the “memory” of all the booked reservations.  That would be true, but the memory is stored on paper written in pencil by hand.  Except for today’s and the next day’s flights, the box holds all the future reservations made at the time for all of Southwest’s flights.  Also note the size of the room.  Today our six Centers (San Antonio, Houston, Phoenix, Albuquerque, Oklahoma City, and Chicago) have hundreds of Employees on duty each day.  The lady behind Bill’s left elbow is at position 14—it doesn’t look like there’s room for many more.  The note on the blackboard says; “All flights scheduled and running.” 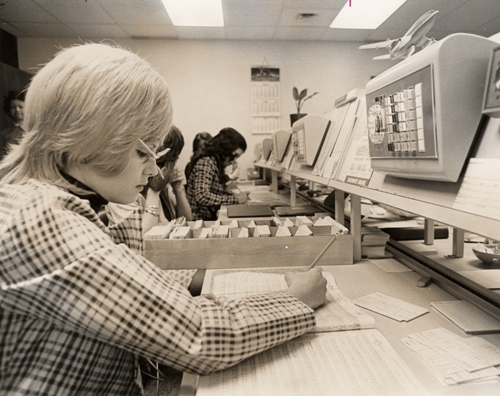 The next photo above gives us some insight into the “technology” available to each Reservations Agent.  There’s not a computer, monitor, or touch-button phone to be seen in any of these photos, although it does look like the Agents have light-weight headsets.  To the left of the control panel is a printed flight schedule, with some kind of a control box or timer to the right of the phone console.  We must have had a computer somewhere because the book into which she is writing contains computer printouts.  My guess is that this is the master inventory, and when a seat was sold, a checkmark was made next to the flight.  She is the only agent with this book and a box of reservations next to her, so she probably is a control agent.  I don’t know if you can see it, but there is a track under the superstructure that holds the phone.  As Agents complete a Reservation Card, it went in the track which carried it to this Employee.  She pulled the card, checked off the seats booked on the inventory sheet, and then filed the Res Card into the box to her left.  My guess is that this held today’s and tomorrow’s flights. 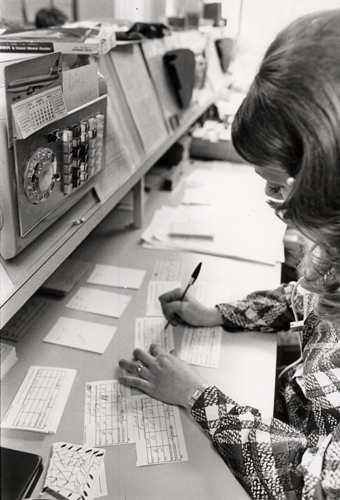 Above, we see an Agent changing a reservation on the Reservation Cards.  But before that, look around her work space.  On top of her phone is a calendar from Continental featuring a DC-10.  From the calendar, we can see that these photos were taken in March, 1974.  At that time, we only flew between our three original cities, Dallas, Houston, and San Antonio.  To the right of the phone is a copy of the North American edition of the Official Airline Guide which lists schedules of all airlines.  The Reservations Cards are simplicity.  At the top are two spaces for Passenger names, in this case, a “J Everett” and an “N. Percy.”  In the first vertical column are the origin and destination.  The two cards to her left are from “H” (Houston) to “D” (Dallas).  The next column is the flight number, in this case, Flight #12, followed by travel date.  The top left card is for travel on 3-8, and after the date is the status of the reservation, which is “XX” which would mean canceled.  The last column is the number in the party, which is two in this case.  The bottom left card shows the party rebooked on the same flight for March 25.  Sherry Atlas is the Reservation Agent.

As always, any Employees who can add any detail are invited to comment.