Continuing the “June is Our Birthday Month” series, we look at a pivotal day in the history of Love Field.  As we saw in earlier posts this month, Love Field in the early 1970s was a busy place.  Airlines like Delta had upgraded their operations with temporary facilities to bridge the days until the new DFW Airport opened.  That day came on Sunday, January 13, 1974, and on that date, Southwest became the sole airline remaining at Love.  Although I’ve covered this before, I recently found unseen negatives documenting the day.  In this first of a two-part series featuring those photos, we begin with what the other airlines left behind. 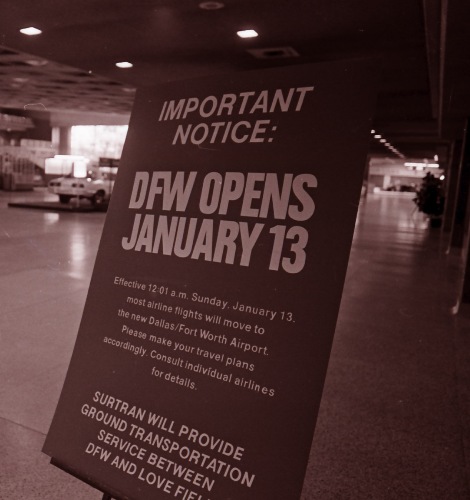 No matter how large the effort to get the word out about major changes, some folks will always remain oblivious.  For those who hadn’t read the paper or watched television news for the preceding month, this sign probably brought some shocking news as they entered the empty main lobby.  “SURTRAN” (for “SURface TRANsportation”) was an attempt to provide bus service between downtown Dallas, Fort Worth, and the new airport.  It also provided service between Love Field and DFW.  (Airtrans—not to be confused with our folks at AirTran—was the name of the people movers that slowly shuttled between the terminals at DFW.) 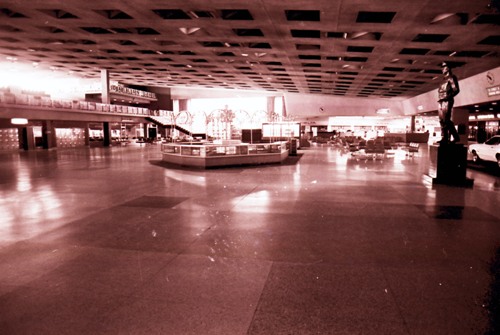 On this Sunday morning after the big move, the main lobby was deserted, except for the iconic Texas Ranger statue standing guard.  For years, car dealers always displayed their latest models in the main lobby, and one dealer has yet to remove his display car on the far right, just in front of the main entrance.  The observation deck can be seen on the mezzanine to the left, with the U.S.O. facility toward the far wall of the building.  On the first floor, underneath the U.S.O. is the main barbershop that, as far as I can remember, had at least ten chairs.  The large main lobby restrooms were next to the lockers on the first floor on the left of the picture.  Another Love Field icon, the large floor map of the world, would have been just in front of the restrooms.  Both the Ranger and the map will be part of the new modernized terminal currently under construction. 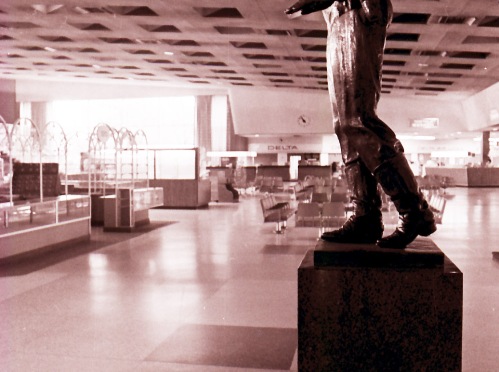 In the middle of the lobby floor were retail kiosks, and again if my memory serves correctly, the kiosk at the left of the photo sold jewelry.  Just beyond it toward the ticketing wing was a newsstand.  The empty Delta ticket counter is at the back of the photo.  This prime terminal real estate was originally occupied by Braniff until they built their new terminal on the south side of the building.  Then Delta moved into the former Braniff position seen here.  Until recently, Continental Express occupied this space.  I don’t know if you can tell, but the ceiling is filthy; no doubt the result of 14 years of smoking inside the building. 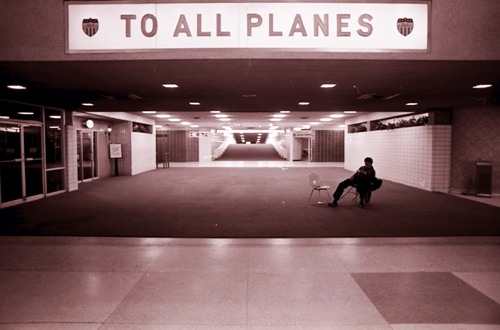 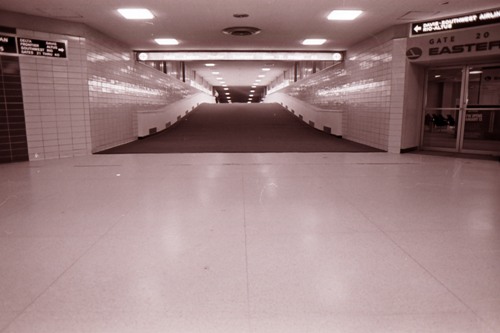 Straight ahead is the North Concourse.  Back when the airport opened, the concourses were named for the colors red, yellow, and green, and each concourse had matching colored tile.  The North Concourse was originally the Yellow Concourse, and the signs to the left and right of the entrance list the airlines on the concourse.  This concourse had Delta, the original Frontier, commuter carriers Altus, Rio, and Davis, and of course, Southwest.  Eastern’s flights left from the very end of the North Concourse, down where our Inflight Training used to be.  Rather than make their passengers walk all the way to the end, Eastern checked their passengers in at the gate position to the right of the photo and bused them to the airplane. 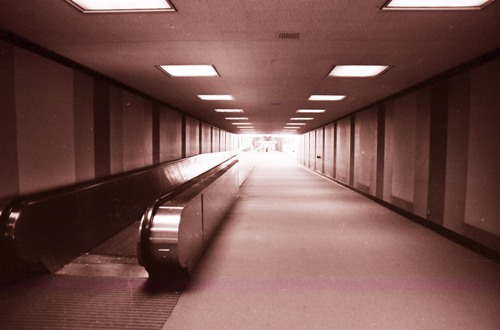 We are now looking toward the main lobby from the current East Concourse.  The photographer is standing where the current concourse security checkpoint is located today.  The brightness down the hall is coming from the windows over the portion of the walkway that goes over the ramp roadway. 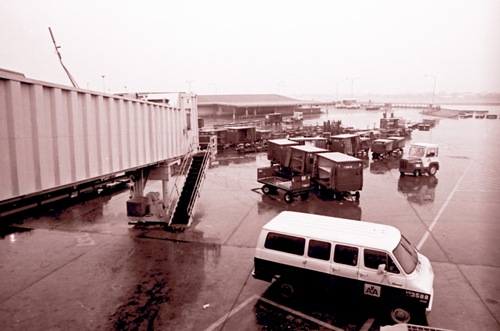 January 13, 1974, was a nasty, wet winter day in Dallas.  Outside at Gate #1, we see that American has yet to move all their ramp equipment over to DFW.  Besides all the baggage and freight carts, a couple of tugs and a wide-body container loader are blocking the gate.  Late the previous evening, there was an organized convoy to drive all the ramp equipment over to DFW, and I’m not sure why American failed to move this equipment as part of that group effort.  Since this was now Southwest’s primary gate, we had to have ramp access to board our flights.  Remember this photo because next week, we will show the solution.  The building in the background is where our bag room (we call it “T-point”) is now located.

This has been a quick look at the areas abandoned by the other airlines after their move to DFW.  Next week, we will see how Southwest started to make Love Field into our home on this day.

James_Sullivan
Not applicable
Amazing shots - I am definitely digging all this Love Field nostalgia you've been posting over the last few weeks! I really appreciate all the effort that must have gone into tracking down some of these negatives. Keep hoping you'll unearth a shot of the original ticket counter as well, but I'm sure that's a needle in what must be a huge haystack. Up until the late 1990s, the small black sign (pictured in the first shot) facing the East Concourse still said Braniff, Continental, Texas International, Ozark. I always loved seeing that when I went to DAL. Interesting to see that the moving walkways on the North Concourse were removed prior to 1974. Do you know when and/or why this was done? I know all three concourses opened with two sets of moving walkways - American removed one side on the West Concourse during their remodel in '68 (and replaced the other side since they changed the floor profile to slope upward), and both "vintage" walkways were still in place on the East Concourse up until the early 2000s. Did Delta pull out the North Concourse installation when they added their upper-level gates? Looking forward to next week's post as well.
16 Loves

Greg_Fischer
Not applicable
Fine post, Brian. Love must have been similar to how a lot of train stations looked like on 1 May 1971. It must have been odd for Southwest employees to go from working in such a busy place to being the only game in town, and with most of the space unused.
23 Loves

dalluvr
Not applicable
I know that it was associated with Braniff originally, but since LUV took over Braniff's wing I wonder if anyone has any pics of the JetRail? I always thought that was fascinating.
1 Love