100 years ago this week, our industry was born over Tampa Bay when the first scheduled commercial flight took place on New Year’s Day of 1914.  The St. Petersburg-Tampa Airboat Line, the world’s first airline, operated the first commercial airplane flight from St. Petersburg to Tampa only a few days after the tenth anniversary of the Wright Brothers first powered flight. 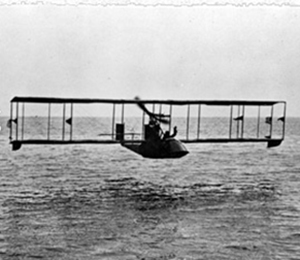 Although the distance between the two cities was only about 20 miles “as the crow flies,” a boat ride could take hours, and a train ride around the bay was about 65 miles.  Thomas Benoist of St. Louis sought a solution, and along with engineer Percival Fansler, approached local businessmen seeking investments in what would become his first airline.  After attaining $2,400 in financing, an auction was held for the first seat on the flight aboard Benoist’s Model XIV airboat.  St. Petersburg Mayor Abram Pheil placed the winning bid of $400 (about $10,526 today) to secure his place in history as the first paying Customer. 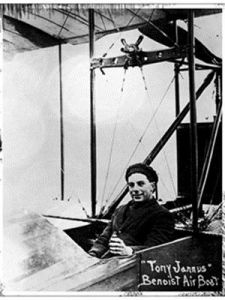 Pilot Tony Jannus was hired by Benoist as the chief pilot for his airline.  Jannus had made his first flight only three years earlier and was self-taught.  He went on to operate a flight school while also conducting airshows throughout the country. In 1912 he had also piloted another of Benoist’s planes from which the first skydive jump took place. 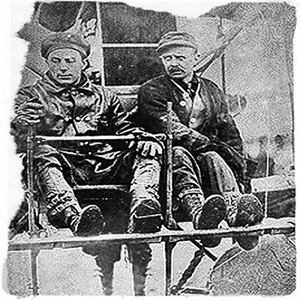 The first flight took 23 minutes to cross the bay at an altitude varying from 15-50 feet, with a brief maintenance stop in the middle of the bay to adjust the propeller drive chain.  Upon reaching its destination, the airboat came to a stop near the Tampa Electric Company on the Hillsborough River, where a crowd of about 3,500 had gathered to welcome the flight. After being greeted by the mayor of Tampa, Jannus turned his plane around and made the return flight back to St. Petersburg a few moments later. 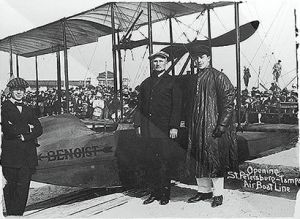 The St. Petersburg-Tampa Airboat Line’s service continued the next day, offering two flights every day except Sunday.  The standard fare was $5.00 (the equivalent to $132 today) per person or 100 pounds of cargo.  Service was expanded to include several other Suncoast destinations along the Gulf, with Tony’s brother Roger becoming the second pilot when their fleet grew to two airboats. 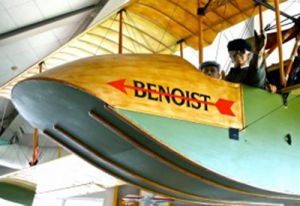 Following four months of service, the airline eventually ran into financial issues and ceased operations. Even though the St. Petersburg-Tampa Airboat Line’s lifespan proved to be brief, it served as an important example of the value of air service and laid the foundation for our business today.
9 Loves
1 Comment

dawn
New Arrival
Itis amazing we can fly period. Flying is a privilege, not a right. I am glad to read this, and look how far we have come in flight,even to the moon.
1 Love