Take a look at the postcard photo above from Los Angeles International in the 1950s.  Do you see a pattern?  Well, obviously there are no jets, but look again.  Every airplane in the photo was made in Southern California.  The Douglas DC-6s and DC-7s were made at Santa Monica, the TWA Lockheed Super Constellation at Burbank, and the American and Western Convair 240s at San Diego.  Until 1958, most airline passengers around the world (at least on this side of the Iron Curtain) flew on aircraft (with the exception of some British aircraft like the Vickers Viscount) made at these three Southern California factories.  Even after the introduction of commercial jets, Douglas made the DC-8, DC-9, and DC-10 at Long Beach, Lockheed made the turboprop Electra at Burbank and the L-1011 TriStar at Palmdale, and Convair had the 880 and 990 in San Diego.  When Douglas merged with McDonnell Aviation in St. Louis, the MD-11, MD-80, and MD-90 series continued to be made in Long Beach.  After acquiring McDonnell-Douglas, Boeing renamed the MD-95 as the Boeing 717, and it was also built in Long Beach.  All of which brings us to the photo below. 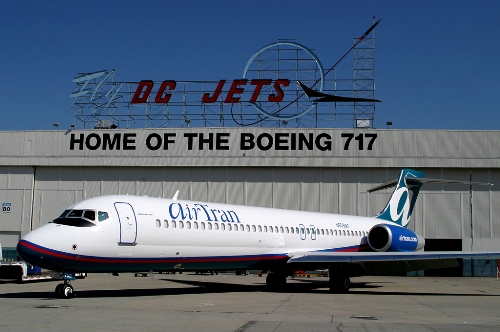 This 717 is N939AT, and the photo was taken on May 23, 2006.  Mark that date and remember this airplane because, on that date, N939AT and an aircraft for Midwest Airlines were the last aircraft to be delivered at the former Douglas plant in Long Beach.  Even more significant is that N939AT is the last new commercial aircraft to have been completed in Southern California.  An era that is so well represented in the postcard above is over.  We have gone from a time when most of the world's airliners were built within a 100-mile radius of each other to none.  The sign on the building above the aircraft urging passersby on the San Diego Freeway to “Fly DC Jets” is a historical landmark.  The plant opened in 1941, primarily to build C-47s, the military version of the DC-3.  Besides the original airliner plant in Santa Monica, Douglas built Navy aircraft like the Dauntless dive bomber, the A-1 Skyraider, and the A-4 Skyhawk at El Segundo, next to Los Angeles International.  (Even military aircraft production has moved elsewhere.)  The Long Beach plant, alone, built over 15,000 aircraft. 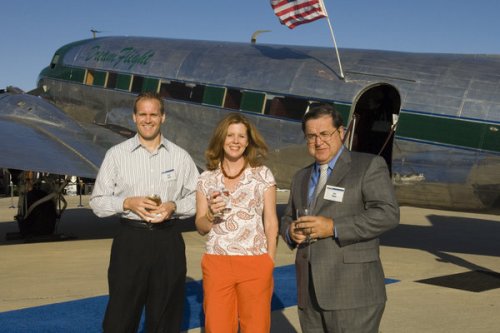 A DC-3 was on hand at the ceremonies to serve as a bookmark for aircraft production in Long Beach with the 717.  Unlike some later products from Southern California, the “Three” did serve extensively behind the Iron Curtain (as the Li-2, a Soviet license-built version) and even in Japan during World War II (as the Showa L2D2).  Even though it was developed at Santa Monica, the lion’s share of C-47s came off the Long Beach assembly line after 1941. 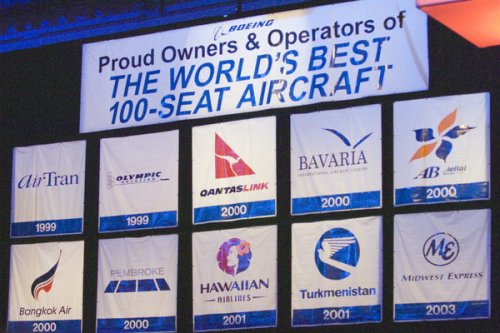 AirTran really represents the alpha and omega of the 717 program.  Not only did AirTran take delivery of the last 717, it was the launch customer, being the first airline to operate the twin-jet.  This board shows all the operators of the 717 who were still in business on May 23, 2006.  (TWA was an early 717 customer, but it had been previously acquired by American.  American disposed of the 717s.) 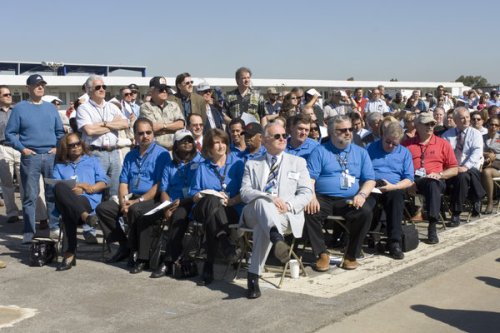 A large contingent of AirTran Employees was on hand for the delivery ceremonies.  In the warm California sunshine, they listen to the speakers on the podium 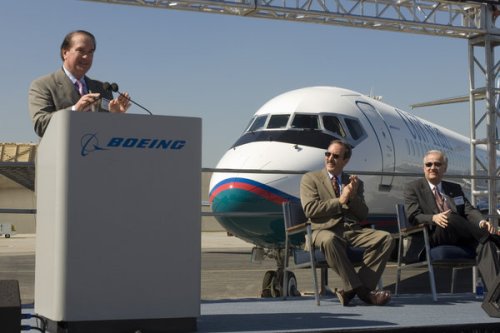 One of those speakers was Joe Leonard, Chairman and CEO of AirTran, who helped close out a remarkable era of airliner production that began with the DC-1 in 1933.  Instead of hailing from Long Beach, Santa Monica, Burbank, and San Diego, the world now flies on airplanes built in Seattle (Boeing), Toulouse (Airbus), São de José Campos (Embraer), and Dorval (Bombardier).  But remember, it wasn’t always so, and the next time you see N939AT, think of the tradition it represents.

Flashback Fridays followup—Early SWAlloweens revisited:  After I posted about Southwest’s early Halloweens on October 14, our President Emeritus, Colleen Barrett, sent me some additional information about our early Halloween traditions.  Colleen tells me that our Flight Crews “were encouraged to dress for Halloween from the very beginning.”  She adds that our Stations (all three of them in the beginning) were allowed to decorate if they wanted to, but it wasn’t organized.  “Some did, some didn’t,” according to Colleen.  When we opened San Francisco (for the first time) on Halloween in 1982, Colleen reports that “our People went way out on this one, and everyone in the airport was staring at us as though we were crazy.”  That same year is the first occasion that she remembers a “Headquarters Halloween” with costumes and skits.  Her most memorable effort that year was the Finance Department dressing as grapes and singing “Heard it through the Grapevine.”  Thank you Colleen for filling in the gaps.

Anonymous1738
Not applicable
Wow, SoCal really dominated aircraft manufacturing before the 707. Great picture of the "Fly DC JETS" sign as the last jet rolls off the line where the first DC-8 did in 1958. The solid designs of the early jet age have stood the test of time. The classic DC-9 nose, windscreen, and fuselage are still in production by COMAC for the ARJ-21, since they purchased the tooling. Similarly, the 707 will live on in its ultimate evolution, the 737 MAX.
14 Loves