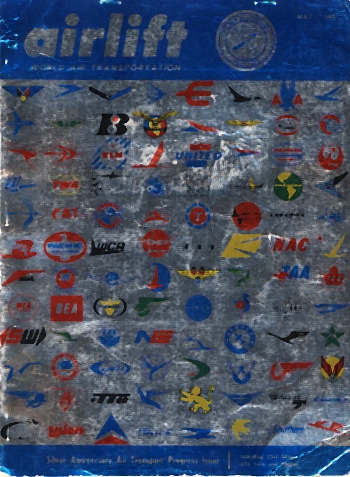 One of the things I like to do here at Flashback Fridays is to place historical context behind current issues we face as an airline.  Without being too contrarian, I admit I like to burst myths of aviation’s “good old days,” that period from about 1955 to 1965 upon which everyone looks fondly today and bemoans, "Gee I wish we could travel like that today."  Don’t get me wrong, that is the exact period of commercial aviation that interests me most, but it wasn’t some perfect “Nirvana” or “Camelot” for travelers.  A friend of mine sent me the 1962 “Air Transport Progress” issue of Airlift magazine. 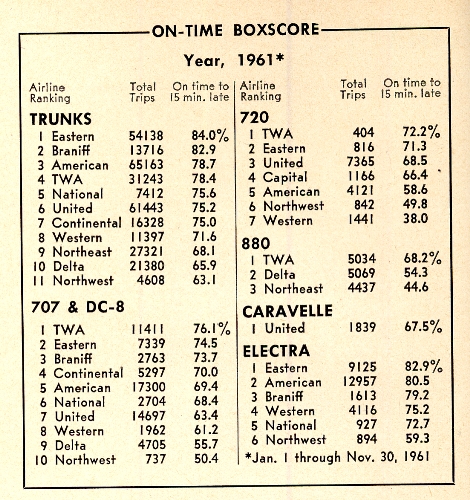 Having been part of Southwest for over 16 years, I naturally was interested when I saw a page with ontime charts in the magazine.  The chart above displays the trunk carriers’ (today these would be legacy carriers) ontime records for  1961.  To be honest, the performance at the very top of the 1961 chart is similar to today.  Eastern led the trunks in 1961 with an 84 percent ontime (includes, like today, flights arriving within 15 minutes of schedule) rating, followed by Braniff at 82.9 percent, and American at 78.7 percent.  There is a lot more disparity between best and worst in these “golden age” charts than recent modern standings.  The bottom four carriers were Western at 71.6 percent, then Northeast at 68.1 percent, Delta at 65.0 percent, and at the bottom, Northwest at 63.1 percent.  Ironically, all four of those airlines are part of Delta today. 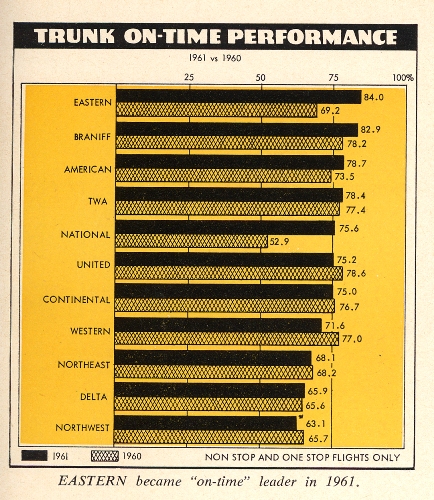 Take a look at 1960 in the chart above, however.  Five of the airlines finished below 70 percent, with National at 52.9 percent.  Most of the same factors that affect ontime performance today were present back then:  heavy loads, weather, mechanicals, and air traffic control.  But the industry was also in a top to bottom revolution by exchanging jets for almost brand-new piston-powered airliners.  There were learning curves arising from the operation of a brand new type of propulsion system that may have added to those ontime issues.  Check out the ontime records of those early jets in the previous chart, and you will see they didn't have sterling ontime records.  Even so, by 1968, Braniff was posting an industry-leading ontime record of 92 percent. 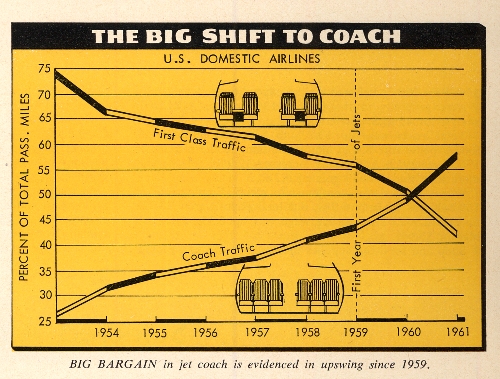 Something happened in 1961 that forecast the success of Southwest in the future.  For the first time, airlines carried more passengers in coach class than in first class.  Coach passenger miles in 1961 jumped 18.7 percent and comprised 57.8 percent of the industry’s total traffic.  Unlike the propeller days when coach passengers flew in all-coach older aircraft, the early jets offered room, speed, and comfort for the coach passenger who shared the same aircraft with first class travelers.

Another 1961 transition involved fuel.  The entire airline industry used over two billion gallons of jet fuel in 1961 (last year alone, Southwest used 1.4 billion gallons).  1961 was the first year in a long time that the usage of avgas (for piston engines) dropped below one billion gallons—that statistic would continue to decline as the 727, DC-9, and BAC-111 entered service. 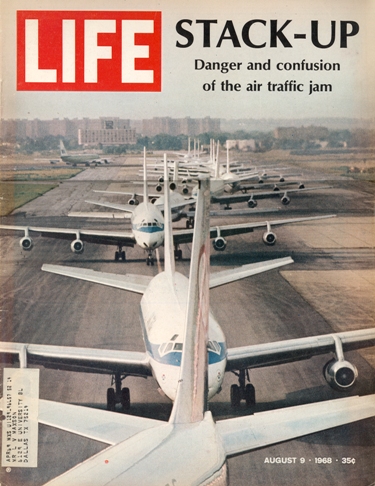 A familiar issue back then (actually a few years later) that is still around today is Air Traffic Control modernization.  In the summer of 1968, flight delays were the topics of conversation, exacerbated by Controllers working to rules.  On some days, delays ran to six hours.  In this August 9, 1968, issue of Life, the article calls for an additional 600 airports to handle the growth in commercial and general aviation traffic.  The irony is that these delays happened during the year Braniff was compiling a 92 percent ontime record, and they had a sizeable number of flights to the Northeast.  Even back then, aviation “facts” were often contradictory.

Next week we will return to Southwest topics, but I hope you enjoyed this brief look at a slightly earlier time.

Jim_DiGiovanni
Not applicable
Maybe what made it 'seem' like the 'good old days' was the combination of being treated with a large measure of indulgence by the crews (still true on SW, not as much on other carriers) AND (most significantly) the behavior, demeanor, attitude and courtesy (toward one another as well as the crew) of the flying public back then as opposed to the greyhound-bus-passenger-mentality of recent years. Don't fly nearly as much as I did, but won't fly unless it's SW - crews make it feel like the 'good old days' by treating us with courtesy & genuine appreciation - SW policies (bags fly free, no assigned seats but controlled boarding in groups) make it a great value and convey the airline's appreciation of the folks paying their bills (that'd be us 🙂
22 Loves