Flashback Fridays: With this Wing I Thee Wed

Earlier this year, we took a look back at Morris Air and its 20 years as part of the Southwest Family.  While most of the logistics pertaining to acquisition took place in legal offices or boardrooms, one very unique part of the deal actually took place in a wedding chapel on the Las Vegas strip. What better way than a wedding to connect the Culture of two corporate families and profess our undying commitment to Customer Service to each other?  In the business world, families come together in many ways, but nuptials are probably not part of most companies’ acquisition checklist.  In our tradition of not being afraid to be different, a wedding was announced to the media on Valentine’s Day 1994. 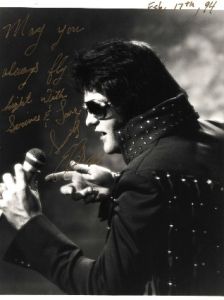 The event would take place three days later at the Graceland Wedding Chapel and would be presided over by Las Vegas’ most requested wedding guest. 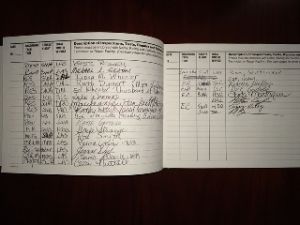 Instead of being used to document maintenance performed, an aircraft logbook served as the guest registry. 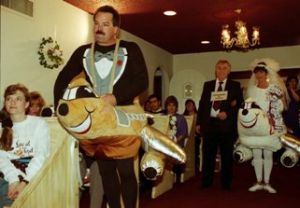 Las Vegas Provisioning Supervisor Bryce Nuttal filled the role of the groom, and Morris Manager Elise West played the blushing bride. Las Vegas Station Manager Dan Wilkinson portrayed the Department of Justice, who, with the blessing of that federal department, would give away the bride. 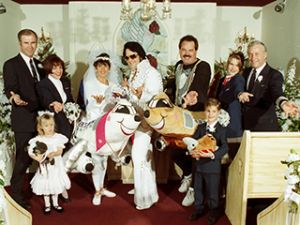 Complete with specially-created TJ LUV airplane attire, Southwest Spirit and Morris Magic were joined in hangarly matrimony with the following vows: Elvis (the preacher)>> We are gathered here today to officially consummate the marriage of Southwest Airlines and Morris Air. Who blesses the union of these two airlines? Father of the Bride>> The Department of Justice  Elvis>> Do you, Southwest Spirit, take Morris Magic under your wing, to protect and carry their local Customers and excess baggage as long as you both shall fly? Groom>> That will fly! Elvis>> Do you, Morris Magic, solemnly promise to prove Positively Outrageous Customer Service, and continue to uphold the high standards of the Triple Crown? Bride>> That will fly! Elvis>> Repeat after me. With this ring I thee wed, and with all my corporate assets I thee endow, in the name of the FAA, the DOT, and the Department of Justice. Elvis>> In turbulent and clear skies, may your magic never mellow and your spirit always soar.  In the name of Southwest Spirit, Morris Magic, and the Employees of these two airlines, I now pronounce you one big flying Family of LUV.  You’re cleared for departure. 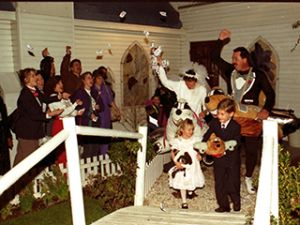 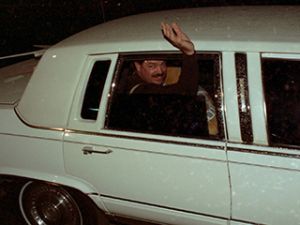 When asked by the Dallas Morning News about plans for the wedding night, it was reported that Mr. Spirit and Ms. Magic planned to disappear down the strip in a limousine. “They won’t tell anyone where they are going—if they’re just plane smart.”
Our 1994 wedding was an important gesture to the Employees of both Companies, as it served as a fun way to bring together the Winning Spirit and rich Culture from both groups.  It also provided lots of positive publicity in media markets throughout the country at a time when many communities had not yet been introduced to Southwest.  The honeymoon continues today as we have been blessed with many years of clear skies and lots of (not so) little airplanes.
6 Loves