Going Green: How I Learned to Stop Driving and Enjoy My Commute

It’s no secret that I love to ride the train, and a few years ago when I heard that the Dallas Area Rapid Transit (DART) was going to build the Green Line on the right of way of the old Katy (Missouri-Kansas-Texas) Railroad branch line along Denton Drive, I got very excited.

The old Katy line runs just across the street from our Headquarters.  But I would still have to close the 20-mile gap from my home just outside of Denton to the DART line.  Thankfully, the Denton Country Transit Authority (DCTA) began rebuilding their portion of the old Katy line from downtown Denton to a connection with DART’s Trinity Mills Station in Carrollton. 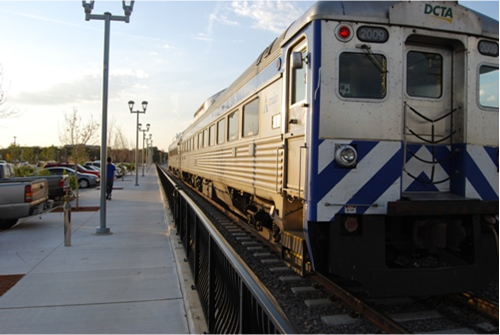 Now, on most days, I drive the short distance from our home to the closest station in Denton, where I begin my rail journey to work.  DCTA calls their service the A-Train, and they began operating last June.  They ordered 11 rail diesel units from Stadler in Switzerland, but the last of this order is just now arriving in Denton.  In the meantime, DCTA leased 11 tried and true Budd RDCs (rail diesel cars) from the Trinity Railways Express (above).  These vintage, stainless steel beauties were built by the same company that gave us such classic streamliners as the Burlington Zephyrs and Canadian Pacific’s (now VIA Rails') Canadian.  In fact, for most of their lives, the A-Train’s RDCs worked in Canada linking small communities with big cities.  Riding the RDCs is like stepping back in time to the age of the classic streamliners, and they have a “mainline” railroad feel. 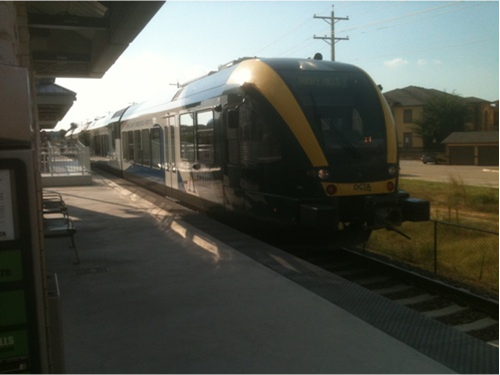 The new cars (above) are gradually being integrated into the fleet, and the one time, so far, that I’ve been able to ride a new Stadler car, it reminded me of train travel in Europe:  clean, quiet, and comfortable.  I really like the design of the Stadler cars, in many ways they are a throwback to the Art Deco streamlined era.  At the Trinity Mills Station, I walk across the platform to DART’s light rail Green Line for the rest of the journey to work.

Whereas the A-Train has an intercity railroad “feel,” DART (above) is very urban.  It reminds me of riding BART in the Bay Area as it is elevated over a section of industrial buildings.  Someone once wrote that riding the train is like travelling through a town’s back yards, and he was right.  You literally look in the back yards of houses and at the backside of businesses.  The view isn’t necessarily pretty, but it is interesting.  (There are still a few areas of “country” on the A-Train route like the Trinity River bottom and across Lewisville Lake.) 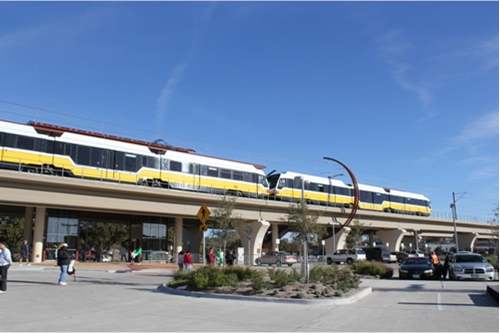 While my daily two-train commute doesn’t save me time over driving (unless there is a wreck on the freeway), it saves me a whole lot more, starting with my sanity.  It is wonderful to sit down and not have to worry about the jerk tailgating me or the guy who suddenly decides to use my lane, even though I am already occupying the space he wants.  There is no fighting the stop and go traffic on the train, and you can relax, nap, read a book, or just look out the window.  It also saves wear and tear on my car.  Even with a carpool, I was putting about 18,000 miles a year on my car.  Now, it is down to a little less than 10,000 miles a year.  The cost is a lot less too.  Before, I was spending about $70 to $90 a week on gas (depending upon gas prices)—not counting weekend pleasure travels.  My train travel costs about $36.00 a week and my “work” gas is down to about $16 a week.  That doesn’t even include the benefits to the environment from removing cars off the road. 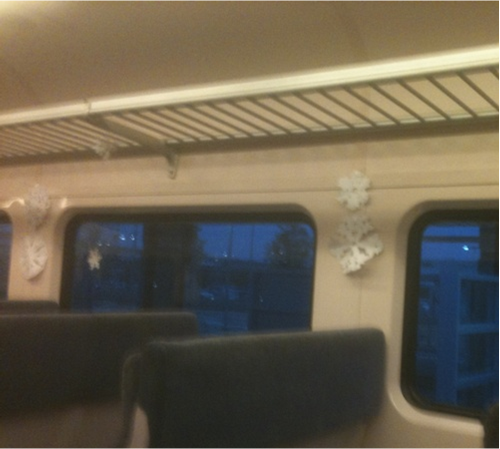 I have become part of a community of regular train commuters, and I notice the same people daily on my journey.  The number of people from just my train who detrain at the “Southwest stop” average about 20—that’s 20 fewer cars on the road from just one train and one destination.  And, it’s part of a community in other ways.  During the last Holiday Season, the A-Trains were decorated with handmade decorations (above), and the A-Train crews have learned the “regulars” on their trains.

Admittedly, you give up some freedom when you leave the car at home.  You can’t just decide on the spur of the moment to run errands on your lunch hour; you have to plan them around the times you do drive.  Also, if you don’t bring your lunch, you are pretty well locked into eating at the Employee cafeteria.  But these are easily overcome when you consider that you have given yourself two hours a day free from traffic worries.  If your work schedule and location allow, consider taking the train, it might add years to your life, and it will help the environment too.

power-my-life
Not applicable
Thanks for sharing your experience with public transit in Dallas! We have a few employees that currently use the DART and a few that are considering making the switch. It’s amazing that your “work gas” is down to $16 a week! Whitney S. powermylife2012@gmail.com
32 Loves