Effective November 12, you’ll be able to buy tickets to, from, and within Mexico at southwest.com!  We’re partnering with Volaris, Mexico’s second-largest airline, in order to offer our Customers connections between cities in the Western part of our network and five of Volaris’ Mexican destinations—Cancun, Guadalajara, Morelia, Toluca/Mexico City, and Zacatecas—connecting via Los Angeles, Oakland, and San Jose.  This will bring up to 85 new roundtrip markets onto the Southwest grid, which will be phased in through November and December!  (See below for a list of international connect markets.) And if your travels take you between cities inside Los Estados Unidos de Mexico, Volaris can take you between 23 Mexican airports, from Tijuana and La Paz in the West to Cancun in the East and Oaxaca in the South.

As interesting as the “what,” is the “how.”  You guys may remember a couple of years back when we announced plans to enter into codeshare agreements, including Volaris.  However, as we started building the list of requirements and changes we’d need in order to handle international operations—either codeshare or even online with our own aircraft—we realized we just don’t have the technology in our current reservations system to make international travel possible.  So we’re now busily working to replace our reservations system, which will take at least a couple of years.  But because Southwest is so eager to tap the Mexican market, we partnered with Volaris to develop International Connect, an “under-the-hood” process that stitches our two networks together now!  Booking international reservations will look and feel almost exactly like any other booking on southwest.com, but behind the scenes, the International Connect portal is conducting two separate transactions—one with Southwest’s reservations system and one with Volaris’—and tying the two reservations together with messages that enable through-checking of luggage and ensuring that our schedules remain in sync.

International Connect is an awesome interim step—true Southwest innovation at its best.  It's a convenient, easy way to give our Customers access to, from, and within Mexico.  So plan a trip "south of the border, down Mexico way" with Southwest and our new partner, Volaris beginning November 12, via southwest.com.  Vamonos, y’all! 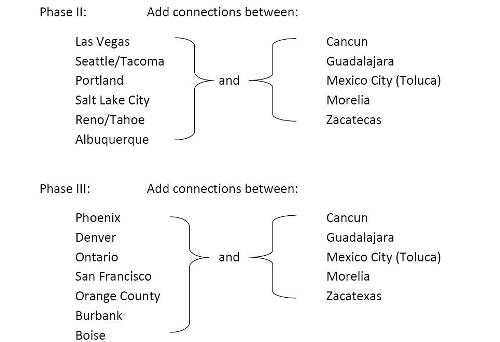 Anonymous4464
Not applicable
Only 1 Texas city and it's El Paso? Really?
11 Loves

Chester_B
New Arrival
Southwest.com/Mexico doesn't work (it was in your press release). What is the date for Phase 3? Can I use my Rapid Rewards to fly there?
6 Loves

Rachel_A
Not applicable
Will Rapid Rewards round trip passes be valid for Mexico?
8 Loves

lmoffat
Not applicable
Hi Chester- The link should be working correctly right now. Sorry about that! Laurel
5 Loves

Nancy_H
Not applicable
Can we use Rapid Reward certificates for Volaris flights?
4 Loves

lmoffat
Not applicable
A few of you have asked how Rapid Rewards will work with our Volaris partnership. At this time, Customers aren't able to use Award tickets or earn Rapid Rewards credits for Volaris flights. Laurel
12 Loves

Going_Like_Sixt1
Not applicable
Disappointed that the departure cities are so oriented toward southwest. No, wait, is THAT the reason? FLL or RSW to CUN would be killer!
9 Loves

Jessie1
Not applicable
This sounds great! Will flights be direct? For examply, SFO - CUN...would there be a stop in between? I've heard Virgin is going to start offering nonstop flights to Cancun from SFO and LAX...The only thing missing for me is SAN - CUN. 🙂
4 Loves

rueclezmyplace
Not applicable
When Rapid Reward award tickets can be used, I would definately book...until then, no go. And...check your links...the press release links to the PR site that requires secure access--not too helpful to those of us not in the media.
5 Loves

johnny_simpatic
Not applicable
Great news! Phase 1 should include Volaris adding flights from one or more key Texas cities so THEY can tap that market and SOUTHWEST can feed them traffic from the Midwest, Northeast, and Southeast. (e.g. MCO-SAT-Morelia or BWI-HOU-Guadalajara or MDW-SAT-Zacatecas). Fares to Mexico -- especially any place not named Cancun or Mexico City -- have gone through the roof lately. There's plenty of profit out there. Grab it now before someone else does!
4 Loves

Anonymous2940
Not applicable
Will Chicago/Midway be a city included for Phase III? I'm sure it will have more travelers than Spokane and Portland combined.
3 Loves

Anonymous1481
Not applicable
If , is going to have a conections in El Paso, TX. Why not, to fly , To Chihuahua City,. is a short. flight, and, It would be nice, and fancy, to land. on a 737 new , southwest, Jet, would be my dream. Thanks. and best regards.
4 Loves

Daniel_Muller
Not applicable
So when will Southwest encourage Volaris to come to the most populated part of Texas, Southwest's birthplace? Since the bankruptcy of Mexicana, our only real Dallas alternatives are American Airlines -- and Continental (delete, delete, delete) and VivaAerobus in Houston. Pretty sad.
4 Loves

Anonymous2307
Not applicable
No flights from SAT to Mexico? Really? The number of Mexican nationals moving to SAT and people with family in Mexico is staggering. Plus, it would be such a short flight for someone from SAT to go to vacation in Mexico as well. Right now we have to take AA or Continental to Houston or Dallas to then go south. Is adding more Texas cities out of the question???
5 Loves

CM
Not applicable
I agree with the anonymous writer the stated that departures from and arrivals to chicago/midway would have very high sales. I was hoping to use this service already to have family visit in December. Please consider adding this city in one of the planned phases.
3 Loves

Anonymous241
Not applicable
Two questions: 1. Why if passengers will connect through Los Angeles you don`t offer any OD market from that airport 2. This is basically just selling SW and Volaris tickets together, it is not a codeshare, and it does not add a single flight to Mexico (given the current FAA tier 2 restrictions) ¿right?
4 Loves

Employee
Hola folks! A few responses to your comments: Everyone asking for more Volaris transborder service: let's get this initial engagement under our belt and then we'll start talking expansion! Anonymous @ 17:56: you're right--sorry if I wasn't clear. You'll be able to purchase Volaris' service from LAX, OAK, and SJC nonstop to Mexico *in addition* to connecting itineraries with Southwest--but no, we're not adding any new nonstop service for International Connect, either on Southwest or Volaris. Goodnight everyone--Halloween at SWA HDQ tommorow. You have to see it to believe it!
144 Loves

Anonymous2772
Not applicable
Our technology, or lack of, worries me. 2 years since CS2 began and its still not working right. Now we're going to add International code-shares? Maybe we should be fixing our current CS2 issues before we rush into this. Our customers and front line employees will be the ones suffering, again. Volaris, Air Tran & new cities- the company is taking on a lot right now. Hopefully they will all be executed better than CS2 was.
147 Loves

Employee
Hey Brillanto--you're right! I learned the other/wrong way back in High School Spanish (it was on our final exam!) so should I send a complaint for faulty teaching to Miss Lang, my teacher??? 🙂 We're SO looking forward to bringing our brand into Mexico--so I guess getting the name of the country would be a good thing! Bill
144 Loves

alex_mayorga
Not applicable
Can I get a free ticket for spotting the typo on "Zacatexaz"? Or was that intentional on Southwest being from Texas and all ;-) Anyhow, as I tweeted the other day, would you able to get 3 pax from ZCL to PHL on early December?
149 Loves

lmoffat
Not applicable
Hi Alex, Thanks for catching that! 🙂 You'll be able to book starting November 12, but you may have to look at flying from PHL to one of the west coast cities listed here to continue on to Mexico on Volaris. Check it out on southwest.com on November 12! Laurel
143 Loves

Necie
Not applicable
You need to tap into the South-western Ontario(Canada) market by offering direct flights to Cancun from Buffalo,NY!!!!!!
144 Loves

Stan_Peter
Not applicable
What about flights from St. Louis?
145 Loves

gonza
Not applicable
It really doesn't make sense, it is the same thing as booking two separate flights which is always an option with out this partnership. Volaris; why don't you just add a direct flight for example from Oakland CA. to zacatecas or southwest you could do the same thing, it will be more convenient for alot people.
145 Loves

Alan2
Not applicable
Why can't Volaris offer flights from El Paso? El Paso is right in the middle so it could connect cities in the West and cities in the East to places like Mexico DF, Acapulco, Mazatlan, and Guadalajara. Frontier Airlines used to fly from El Paso to several Mexican cities as did Continental back in the 1980s. With too many people afraid to travel to Juarez, and since so many Juarenses have moved to El Paso, it only makes sense to have flights to El Paso. El Paso would make the perfect connecting city for Volaris and Southwest.
148 Loves

JCM
Not applicable
DO NOT FLY VOLARIS! My fiancee had her shoes, a bag of chocolates and makeup stolen from her luggage on a flight from Chicago to Guadalajara. When we attempted to make a report at Guadalajara Volaris staff refused to take a report and asked her why she did not check her bag before she left the airport. Short of calling her a liar they told her she could not report the theft. When I tried calling their corporate number, they also refused to take a report and said that we needed to have checked out bags for stolen items before exiting the airport. I, as well as countless members of my family, have flown Volaris in the past but no longer. I cannot use an airline that will take thousands of dollars from me but will refuse to reimburse a $90 pair of shoes, or take a report to investigate a theft for something that was stolen while in their possession. Extremely lousy customer service.
151 Loves