Happiness in the Land of Cars

Though you may not have realized it was possible, the Happiest Place on Earth just got happier. June 15, 2012 marked the grand reopening of Disney California Adventure at the Disneyland Resort in Anaheim, California, and as an avid Disney Parks fan, I jumped at the opportunity to have a sneak peek at the new updates and additions.

Walt Disney said that Disneyland, "has that thing - the imagination, and the feeling of happy excitement - I knew when I was a kid." I've had the opportunity to visit the Disney Parks countless times throughout my life, and the happy excitement that Walt describes is what keeps me coming back. Disneyland is always growing and changing, and each experience is an exciting, new adventure. 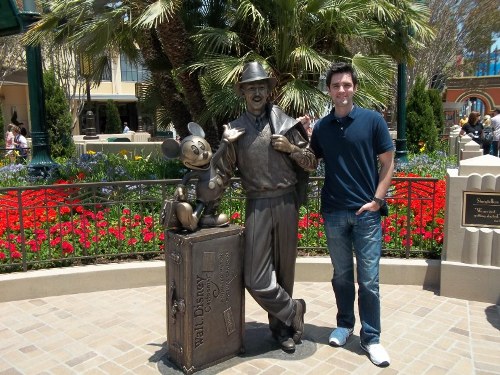 Guests will notice the changes to Disney California Adventure immediately after walking through the gate and strolling down Buena Vista Street, an area set in the 1920s when Walt Disney first arrived in Los Angeles. Buena Vista Street features new shops and dining locations and ends at the Carthay Circle Theatre, a recreation of the original theatre where Walt Disney debuted his first full length animated feature film, Snow White, in 1937.

My favorite part of the area is the new Walt Disney and Mickey Mouse statue, "Storytellers." The statue depicts a young Walt who has just made his way to California to chase after his dreams. There's no place more fitting to showcase this piece than the original Disneyland Resort, where one of Walt’s biggest dreams came to life.

Another incredibly exciting addition to Disney California Adventure is the all-new Cars Land, based on the hit Disney-Pixar Cars movies.

Cars Land opened with a star-studded red carpet event featuring the creator of Cars, Pixar's John Lasseter, as well as voices from the movies, like Bonnie Hunt, John Ratzenberger and Larry the Cable Guy. Lasseter connected the cables at the official Radiator Springs neon lighting ceremony along with Walt Disney Parks and Resorts chairman, Tom Staggs.

Southwest Employees, Olga Romero and James Goodman, were on hand during the festivities to celebrate the new expansion with radio stations from around the country and share how easy it is for families to visit Disneyland.

Adults and children alike will be lost in the fantasy of Cars Land the moment they step foot onto Route 66 at the Radiator Springs city limit. I needed a few minutes just to soak everything in myself. The view of Ornament Valley, the backdrop to the new attraction, Radiator Springs Racers, is absolutely breathtaking. If I didn't know any better, I would have thought Cars Land was built in the middle of the Grand Canyon.

Racers is my favorite of the three new (and all pretty great) attractions featured in Cars Land.  Guests are taken on a ride through Radiator Springs where they encounter most of the characters from Cars in true life size form (complete with a tractor tipping lesson from Mater). The attraction concludes with an exciting high-speed race through Ornament Valley against a car full of fellow park Guests.

Not only is Racers my favorite Cars Land attraction, but it is also one of my favorite attractions in all of the Disney Parks. The detail provided by the Imagineers who designed and created the ride truly transports you into the world of Radiator Springs. It is exciting, entertaining, and will not disappoint. (Helpful hint: grab a FASTPASS for Radiator Springs Racers in A Bug's Land when you first get to the park. A return time will be provided so you can skip the queue and enjoy the rest of the park while you're waiting.)

Luigi's Flying Tires, a hovercraft-like ride, is another new attraction to the park and a takeoff on the Disneyland classic, Tomorrowland Flying Saucers. Then there’s Mater's Junkyard Jamboree, which sets you twisting and turning around the junkyard with the help of a few baby tractors and a soundtrack provided by the voice of Mater himself, Larry the Cable Guy.

Both attractions are entirely different from anything currently in the Disney Parks and generated an endless amount of smiles and laughter from the guests that rode them.

But Cars Land and Buena Vista Street aren't the only updates to Disney California Adventure.  The spectacular nighttime show, World of Color, which features over 1,000 fountains of every color choreographed to the music from your favorite Disney classics, also received an exciting new enhancement.  The new "Glow with the Show" feature has Guests wear light up Mickey ears that are synchronized with the World of Color soundtrack. This adds yet another element to mesmerize Guests every single night. I was able to participate in Glow with the Show on its first night, and if I had a dollar for every "Ooh!" or "Ahh!" that it generated, I'd have a lot of money (and that’s just counting my own “oohs” and “ahhs”). So give it a try the next time you're there. You'll be glad you did!

Indeed, the Happiest Place on Earth is happier than ever before... So grab your bags (because on Southwest, they fly free) and we'll see you at Disneyland!