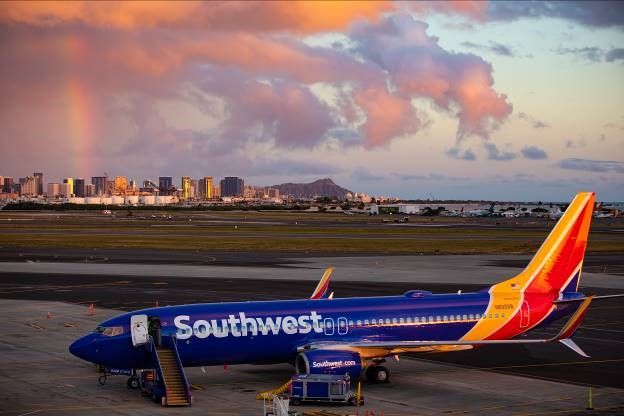 We are so excited!!!!!! I got my 2 round trip tickets for April from Oakland to Maui for a grand total of $294.00.  My husband and I are so excited. We are going for our 10 year Wedding anniversary. I love Southwest airlines.

Just booked our tickets to Maui in September!

Great pices, but fares look like they're already starting to creep up.... It will be interesting to see where prices land long term. But for now it's a great deal!

Can't wait to get back to the islands!

So will pets be allowed in the cabin on flights to/from Hawaii. We fly to Hawaii each year and only Alaska Airlines allows this. It would be nice to have Southwest as an alternative.

How long before flights can be booked from Providence RI to the Islands.

It seems I am unable to book flights to hawaii from ohio. When will that option open up? Right now I have to book two flights one from Ohio to OAK and then a second from OAK to hawaii.

Hi @cerra12, pets are not allowed to travel to/from Hawaii. However, we hope you're still able to join us for a future trip to/from Hawaii!

Hi @irt9206, the initial gateway cities that will offer nonstop service to Hawaii are:

There are no current plans to offer service from Providence, RI or other locations. For more information about Hawaii, please visit Southwest.com/Hawaii/.

Hi @harshvaria, the initial gateway cities that will offer nonstop service to Hawaii are:

There are no current plans to offer service from Ohio or other locations. The option you found is your best way to get to/from Hawaii!

So if people snatched up the cheap flights to get them before they sold out and then they decide they can't go and they cancel within the 24 hour free cancellation period, will those same cheap flights then become available again?

When will Southwest Airlines provide direct non-stop service from San Diego to Hawaii?  And when will ticket sales start?  We are going in June and would rather fly Southwest.  Will there be introductory/promo fares for direct flights from San DIego as well?

Hi @jocelynbiscocho, we’re thrilled to get our first phase of Hawaii service published and available for our Customers, including connecting itineraries for San Diego on day 1.

Expect our announcements for those additional cities like San Diego in the coming weeks. We know our fans—like YOU—and Customers alike are anxious to fly. So are we!
We’re more focused on how we serve Hawaii, not when. We’re excited to share more news soon!
For more information about Hawaii, please visit Southwest.com/Hawaii/.
0 Loves

Very disapointed with SWA's rollout of Hawaii flights.  There are no more tickets available.  Wanted to use miles and have companion status - but no go.  I have all these miles and campanion status and they are worthless.  I will have to purchase tickets through other carrier.  Thanks SWA.

I tried to book tickets from all destination going to Hawaii and was searching from March to June for Anyday but there was nothing available at the price advertised for the promotion. Very disappointed that they tell you have to purchase by March 5 but within hours every thing is not available. Then advertised to travel by June 19th and there are tickets available but it's high 300s. Called customer service and they laugh at you and tells you to call customer relation knowing full well customer relation closed. Bad customer service! What did you do SW? Offer 10 seats at $49? Ridiculous.

How about flights from CA to Kauai?  When will those be available?

Thank for the post Adam! My family is a long time SW fan and promoter!

Any way I can get an alert when we can book out of San Diego?

It looks like more tickets were just released I was able to grab HNL to LAS for $88 at 10:30pm. I see other dates that were sold out as available now

Aloha I am interested in Working for Southwest as a ramp agent. Where do i start.  Mahalo

Similar experience to lovetotravel2: was on hold for 2 hours (requested an agent call back, never came). Then was laughed at and said the tickets at that price a long gone. Plenty of seats still available just at regular price (higher than competitors). I think a couple of tickets at promo price to get on cnn was all there was. ((

Thank you Southwest! I was fortunate enough to get a flight to Oahu from Vegas (via Oakland). My daughter is stationed there in the military and I haven't seen her in over a year. You were my only option to be able to see her and afford it!

When will service start to and from Sacramento? I cant book online or find anything in the flight schedule. Will there be daily service and approximately what time will departures be?

Hi @calbred, we’re thrilled to get our first phase of Hawaii service published and available for our Customers.

Expect our announcements for those additional cities like Sacramento in the coming weeks. We know our fans—like YOU—and Customers alike are anxious to fly. So are we!
We’re more focused on how we serve Hawaii, not when. We’re excited to share more news soon!
For more information about Hawaii, please visit Southwest.com/Hawaii/.
0 Loves

I was excited to hear about Hawaii Flights. I put off buying tickets for a summer vacation until SW started offering. I found out about it in the morning but I was at work and couldn't book tickets. I got home that night.  Extremely disappointed at the ticket prices to the say the least.  For a flight in early June the cheapest tickets priced out $1200 more than other airlines for a family of 5. I ended up going with a competing airline with a nonstop flight (SW was 1 stop flight and much longer) for so much less. I guess it is nice that a handful of people got super cheap tickets, but when your regular tickets prices are so much higher and not even sure what to think anymore.

When will service from SAN DIEGO to HONOLULU be available for purchase?  I'm going late April, but haven't bought tickets yet, will this route be available then?!

- While I understand the West Coast "gateway cities" will grow, will there be an opportunity to book on one ticket a connecting flight from the East Coast in the future?  I'd rather have SWA figure out that a flight from DCA to OAK or SAC etc is best than for me to be the the TA.

Also currently if booking a flight to West Coast with intention of connecting to Hawaii- will bags go straight through?

How about expanding service to American Samoa.  A short flight south from Hawaii and greatly underserved by Hawaiian airlines.  There is no reason the people of American Samoa should pay $900 per adult to go to Hawaii (a 5hr flight away) but can travel to New Zealand for under $350.00 through Apia, Samoa.

I've never been to Hawaii yet, so glad Southwest now has flights that will help make that trip possible!!

Love that SW is going to Hawaii - now if only I can find out when they will be opening bookings for either Oakland or Los Angeles to Kauaii. We have a trip planned mid October, and I don't want to miss the deals!

When is Southwest going to offer service from San Diego to Honolulu?

Is there any word on SAN-KOA? (San Diego to Kona).... trying to book for this summer and do not want to book somewhere else.

Is there any word on San-Koa start???

Interested in learning about HR dept, doing a study for class