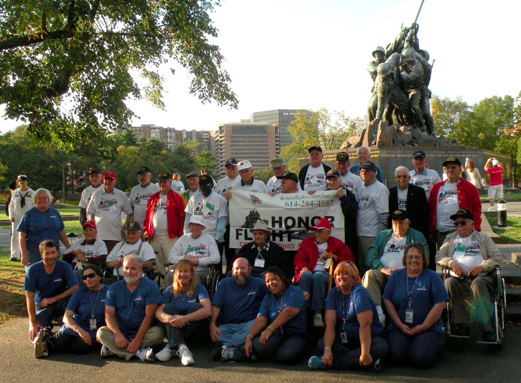 As we started to think about Memorial Day, we couldn’t help but focus on Southwest’s relationship with Honor Flight, whose mission is to transport America’s Veterans to Washington, D.C., to visit those memorials dedicated to honor the service and sacrifices of themselves and their friends. As the Official Commercial Airline of Honor Flight Network, Inc., Southwest provides transportation for 1,000 veterans annually. Many of our Employees have embraced Honor Flight and volunteer for the organization in various ways. Over the Memorial Day weekend, we will honor our Veterans and showcase how our Employees are supporting Honor Flight as they share their photos and stories. Flight Attendant Angela Koblitz: 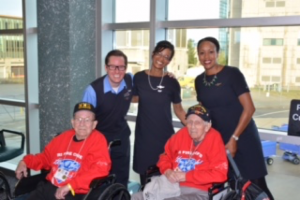 (War Veterans with Flight Attendants L-R Brannan Hetzler, Angela Koblitz, and Sabrina Edge)
Our crew was blessed to spend a fair amount of time visiting with our veteran guests before boarding started, because the flight itself was barely one hour long. I spoke with an energetic gentleman who told me he had served in World War II, the Korean War, the Vietnam War, and was in China around the start of the Cultural Revolution, as well at having been in Cuba around the time of the Cuban missile crisis! The group leaders told us that almost 500 World War II veterans die every day. I believe that I speak for us all when I say that the opportunity to serve and to hear the stories of the men and women who served our nation so courageously is a beautiful opportunity that is dwindling. I know that I cherish the memory of this flight. SOS Representation Dennis DeFrank: 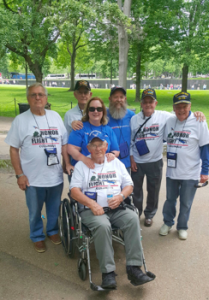 Dennis DeFrank and his wife Lisa (in blue SWA shirts) and five Veterans on a May 14 Honor Flight trip to the Vietnam Wall in background.
I became involved with Honor Flight when the Source of Support (SOS) Charter Team selected Honor Flight Columbus in 2012 as our prime group for volunteering and raising funds to send veterans to see their memorials. We meet the flight in BWI early on a Saturday morning and spend the day with the Veterans as they tour their Memorials in Washington D.C. I have been on 18 trips with four more scheduled this year. I volunteer my time in honor of my father and his two brothers who enlisted just after the attack on Pearl Harbor. Every trip is a walking history lesson. I have met Veterans from World War II, the Korean War, and the Vietnam war. One of my most memorable moments was when I was able to meet a 100-year-old World War II Veteran. He was in the Seabees and helped in the construction of the airstrip at Tinian’s North field, the airstrip for the ENOLA GAY,  the B-29 that dropped the Atomic bomb on Hiroshima. Sometimes the Veterans will not say much and you just have to respect that. One Veteran that had not said much was at Arlington National Cemetery and tears began running down his face. After calming him down, I learned that he was overcome with being back at the Tomb of the Unknowns, where he had once stood guard himself many years before. Michelle Lefler-Baker, Flight Attendant: 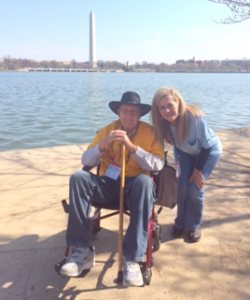 Michelle and a WWII Vet during a March Honor Flight trip.
I've had the honor, joy and privilege of volunteering with this organization for the past four years. I am at almost each departure, depending on my work schedule. I get there around 4:30 a.m. to decorate the gate area and the inside of the airplane with red, white, and blue décor prior to our Veterans boarding. I have goody bags for the crew, which include a patriotic necklace, candy and a small gift to show my appreciation to them for making this Honor Flight remarkable, memorable and a well-deserved adventure. I've had the honor of being a guardian on two of our Honor Flights, which consist of a three-day trip. I got involved with the HF as my father is the Director for the Kansas City Honor Flights. I was at the airport in Kansas City when they were arriving home from an Honor Flight and I said to myself, "I want to be a part of this organization." This is a generation which will soon be gone and they deserve the utmost respect and Honor we can bestow upon them. I've shed many tears, along with such warm fuzzy feelings meeting, spending time with, and talking to these Heroes. They're so grateful for the opportunity to take this trip of an Honor Flight to see their WWII Veterans Memorial created in their Honor. Our Arizona Honor Flights have 12 trips a year. I salute these men and women and proudly wear an American Flag on my uniform. If you know a WWII, Korean, or Vietnam War vet who has not had the opportunity to participate in an Honor Flight, please contact your local Honor Flight for details of how to make that happen or visit https://www.honorflight.org.
2 Loves