As I promised in my "WHOOPS!" post....as penance for forgetting to write about our new January 2009 Schedule.....I will now reveal my grandmother's incredibly delicious, and surprisingly easy, recipe for banana pudding. For those of you who have never had it, banana pudding is very definitely indigenous to Texas and the South. Down here, this is a special treat, one drenched in family history, and revered as an heirloom recipe handed down from our parents' and grandparents' era. However--before I tell you how to send your guests into dessert heaven, you get to read a few things about my grandmother's life and times.

Her name was Dollie Sue Nichols, but we called her Nanny. She was born way out in the country near the town of Glen Rose, Texas near the turn of the century--the 20th century. She was one of nine children, raised by a stern but loving set of parents in the days before supermarkets, automobiles, television--even before radio. Quite literally, Nanny and her brothers and sisters were their own (and only!) entertainment. This forced reliance on each other for support and amusement forged a bond that would last quite literally for over a century. The cool thing about Nanny, and about the whole Nichols clan, is how intensely they shared that singleness of mind. They hung together through everything--those Nichols kids were literally a band of best friends that just happened to have the same mother and father. The annual Family Reunion I have blogged about is the living testament to that, where up to 200 of the descendents of Nanny and her brothers' and sisters gather near the old homestead in Glen Rose every June to recognize the special bond of the Nichols clan and to keep it going--and to celebrate family, fun, and of course, food.

Nanny and her sister, Mamie, were the only two girls in the clan, and they wound up spending a lot of time in the Nichols' kitchen cooking for their brothers and parents. Thinking of what life was like that far out in the country in the early 20th Century, I can't even imagine how hard it must have been for them to make a banana pudding like this recipe creates. Most certainly there were no last-second dashes to Whole Foods for organic bananas back in their day! Things probably got easier when Nanny moved to Fort Worth's North Side after World War I as a blushing bride who soon had three small babies of her own. To hear my mom, aunt, and uncle tell it, Nanny was a frequent visitor at the neighborhood grocery store where, during the Great Depression, she'd often barter the beautifully hand-stitched clothes she had made for groceries for her family. Still, evidently Nanny preferred the country life, because by the time I was born in 1958 Nanny had moved out of the city to a farm northwest of Fort Worth, where she was again able to harvest eggs from the chickens in the henhouse, get milk and butter from the cow ("Bossy"), and in her spare time grow the most delicious tomatoes, cucumbers, and peaches this side of heaven. And the chicken Nanny fried was...ahem....very "fresh."

My brother, cousins, and I clearly remember three things about spending time at Nanny's.....one, how different the weekends we spent working on the farm were than our normal, boring suburban lives...two, how much fun we used to have just out of Nanny's watchful sight (dirt-clod fights and playing in the hayloft are memories that 45 years have yet to blur!)...and the most important of the three--Nanny's cooking. She had a number of signature recipes for which she was famous in our family, in her church, and in a surprisingly large swath of Wise County--like her fried chicken, her black-eyed peas, her fresh peach cobbler, and of course, her banana pudding.

So here it is...although, I have to admit I've had to make a few changes to Nanny's original recipe. Nothing drastic (no instant pudding here, thank you!!), just a little update to reflect the differences of today's ingredients. For example, I think Bossy's milk--unpasteurized and just full of cream--must have made the pudding thicken better, so I've switched to half-and-half and added just a little unflavored gelatin. And storebought eggs today have little dinky tiny yolks, not at all like the jumbo double--yolks that Nanny got fresh from the "girls" in her coop. So I've upped the number of eggs in this recipe. But the resulting product still tastes remarkably like Nanny's. And as for her other three stand-out culinary achievements--her fried chicken, peach cobbler and black-eyed peas? Who knows, maybe one day I'll share those recipes with you as well. Or--maybe not. After all, some family secrets are worth keeping.  🙂

6 egg whites from the eggs above

Separate ice-cold eggs, keeping both the yolks and the whites--just keep them separate! Beat yolks just a bit and set aside. Mix sugar, cornstarch, and half-and-half in a double boiler, and bring them to just below the boiling point. Stir VERY frequently. If you scorch it--game over, start again.

When the liquid mixture begins to thicken slightly, slowly put spoonfuls of the hot sweetened cream into the beaten egg yolks to temper them, whisking the yolks constantly. When they are warm, *slowly* add them into the hot cream mixture, stirring like crazy (see, you get a great dessert AND a workout with this recipe!). Stir for another 5 minutes, still over the heat in the double boiler. Then add the vanilla extract and the unflavored gelatin, mix thoroughly, and cool the mixture for about an hour.

Just before you assemble the pudding, peel and slice the bananas and set aside. In a very clean and dry bowl, pour the 6 reserved egg whites to make the meringue. Two words of caution. First, if there is even a speck of egg yolk in the whites, the meringue will just never stiffen. The oils in the yolk will just kill it. Second, meringue does not set up well on rainy or humid days (which makes me wonder if cooks in Seattle or New Orleans ever successfully make meringue). So plan to do this on a dry, sunny day. If it's too humid for a meringue, then make some home-made sweetened whipped cream instead and top the pudding with that. However, assuming you've passed these hurdles, it's time to make the meringue. In a mixer, beat the egg whites and the cream of tartar on "high" until you get to the soft-peak stage. Then add the sugar slowly. Continue to beat and as you approach the stiff peak stage add the vanilla.

To assemble, put the oven on "broil." Spoon a bit of the cooled pudding mixture on the bottom of a glass dish. Then, put a layer of vanilla wafers, a layer of bananas, and smother them with the pudding-then repeat. You should get either 2 very generous layers or 3 skimpy ones. You'll use the whole box of vanilla wafers--and I HOPE you use all the pudding! When that's assembled, mound the top with the meringue mixture, making pretty little peaks on top. Put the entire dish under the broiler, watching extremely carefully, until the meringue starts to brown (usually no more than 2 to 3 minutes). Be CAREFUL-once it starts to brown it progresses QUICKLY! When it's just a little less brown than you want it, pull it out-it will continue to brown a bit after you remove it from the oven. Finally, sprinkle ground nutmeg sparingly on top and serve.

blusk
Aviator C
Well, Bill, You have taken Nuts About Southwest to a new level as a "full-service" blog. What's next? College courses for credits? Seriously folks, Bill graciously shared with the Blog Team samples of his pudding directly from the Owen Test Kitchens, and the pudding is fantastic. One more question, why didn't you enter the Pillsbury Bake-off or the Texas State Fair? Blogboy
8 Loves

cday
Frequent Flyer C
It was absolutely delicious! Thanks for leaving that bowl on my desk....yummy!
6 Loves

Mary23
Explorer B
And the chicken Nanny fried was...ahem....very "fresh." Bill, I think the term they use now is "free range". Having been raised on a farm it is better chicken then what you get in the stores today.
5 Loves

Employee
BlogBoy and Daytime, you're welcome! Mr. Sheffhield....I agree--deep-fried lard for me, thank you. And Mary--it was the most delicious chicken I've had anywhere in the world. We're still trying to figure out exactly how that wonderful old woman got it to taste that way--but we've started to center it on the electric skillet she used. I'll get back to you after a *lot* more research. *grin*
9 Loves

sheaser
Frequent Flyer B
Well this is one less recipe I get to feature on the forthcoming Thanksgiving episode of Red Belly Radio. I was lucky enough to taste this pudding and I have but one palindrome to say about it: WOW!
8 Loves 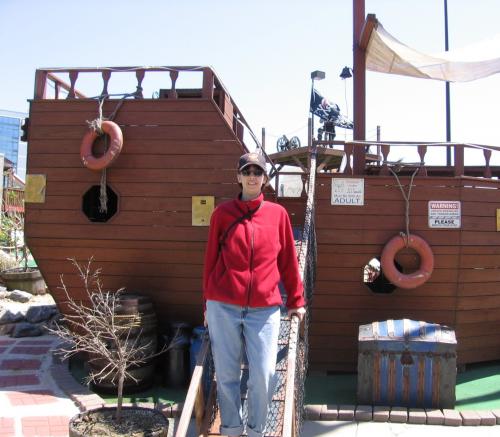 ratchet
Explorer C
Brian, Thanks for the good laugh, I think that is the funniest comment I have read in awhile. Bill, Thanks for sharing the recipe, any chance you could have some of this pudding available in the training class I'll be attending out there next week 🙂
8 Loves

blusk
Aviator C
Thanks, Rachel. My Coworkers don't like my sense of humor, so it's nice to know that I am appreciated. Brian
10 Loves

Anonymous2159
Explorer C
The banana pudding has butter listed in the ingredients, however there is no mention of what to do with the butter?
7 Loves

roxanne01
Explorer C
I noticed the comment about the butter - when do you add it? I've been looking for a great banana pudding recipe and this sounds like it!!!
10 Loves