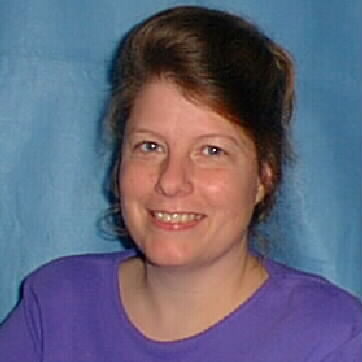 rerickson
New Arrival
The best days at work are when you can have a little part in bringing great joy to someone else.  On February 7, I had one of those “best” days. Let me tell you how this story starts. Several years ago, while working in Customer Relations, I met Don through a phone call and a plea for help.  My position dealt with handling fraudulent, difficult and/or unique situations linked to our frequent flyer program, Rapid Rewards.  He was experiencing a computer problem that was creating major issues for him at the airport.  He graciously and patiently worked with me to create a “work-around” for his situation.  Through it all he continued to be supportive of Southwest Airlines and my efforts to assist him. Don is one of our A-List Preferred, Companion Pass holding Members who travels an average of 70 round trip flights annually.  Since the inception of our All-New Rapid Rewards, he has accrued over 1.4 million points – all of which were from flights and flight bonuses. He is one of our “dream” Customers  who never complains, yet takes the time to call and/or write to let us know how much he “LUVS” us. A few years ago, I had the pleasure of meeting Don in person.  He was working in Dallas and asked to take me to lunch.  I was unable to do the lunch at that time, but I invited him to the Southwest Headquarters and took him on a grand tour.  He is such a fan of our airline and he really enjoyed the experience.  For me, it was a highlight of my career.  I seldom have the opportunity to meet the Customers I have worked with and it was especially nice to meet one who had become a friend. On February 6, Don e-mailed me to advise that he would be taking his last business flight on Southwest Airlines from Chicago (Midway) to Nashville the next day because he was retiring in two weeks. In part, his e-mail stated, “I would like to thank you especially and everyone with Southwest for all the great flights I have had. You guys and gals are the very best. I will miss the fun I have had on your planes when I retire.” I knew that after years of travel and “LUVing” Southwest Airlines, we had to make his last business flight memorable.  I really wanted to hop on a plane and escort him on that last important trip, but the timing of his email and our schedule prohibited me from doing so. I reached out to my Southwest Family at both of the airports and asked if there was anything they could do to show Don what a special and valuable Customer he is to Southwest and let him know how much we would miss seeing him weekly.  Within seconds, I received responses from the Managers at both airports.  I was so excited!  With all the weather issues we have experienced in recent weeks, I was touched at not only the promptness of the responses, but of the obvious desire from my comrades to make this a special day for our special friend.  I gave no instructions other than to make it a day he wouldn’t forget. I am so proud of my Southwest sisters and brothers!  They embraced the request and went above and beyond what I could have hoped for and really showed Don the true definition of a “Servant’s Heart.” At Chicago (Midway), they made announcements at the gate, thanking him for being such a dedicated Southwest Customer and showered him with a gift basket full of Southwest FUN. 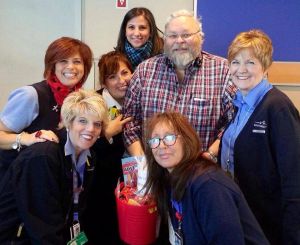 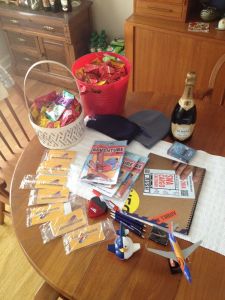 When he landed in Nashville, he was greeted with cheering and the awesome banner two of our Southwest CSAs made for him. 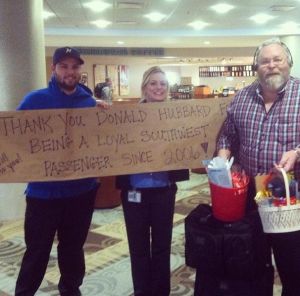 Special thanks to Mandy Regen, Kathy Rusho, Amanda Fisher, and Trey Shaw for making his landing so sweet!
After he arrived home, I received this e-mail from Don:

Thank you, thank you,  thank you!!! WOW ... that was amazing!  I never expected anything like the reception I got in Midway and Nashville (and on the plane).  Everyone was so warm and honest in their thanks to me.  It was very touching.

They announced to everyone in the gate area that I was retiring and they were thanking me for all the years of flying I had done on Southwest Airlines.  Folks were clapping and congratulating me ... so cool!!

As folks got on the plane, I heard things like:

"I've flown 1.5 million on American and they have never given me anything."

"I've never seen any company thank a customer like they thanked you ... that was really cool!"

You ARE the LADY!!

I have included a photo from Midway and one of all me "loot."  I have enough peanuts for more than a year!

Lastly, I reached out to the AMAZING Kim Seale in Customer Relations.  I asked if he could pen a nice little "Thank You" note to Don and send a couple pieces of Southwest Memorabilia.  In true Kim fashion, he went above and beyond!  He told Colleen about Don, and she sent along two books, one of which was her own, “Lead with LUV.”  On the inside cover page, she hand-wrote a wonderful letter to him thanking him for his loyalty and told him we would miss seeing him so often.  I know that Don will be thrilled beyond words when he receives these gifts. I am so thankful to everyone that helped to make my special Customer’s last business flight so memorable.  We just proved what Don has told me over and over again, “No one does it like Southwest!”
18 Loves