I Thought You Were Going To Bring The Mofongo? 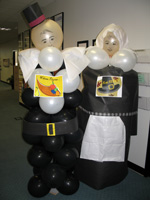 To me, there are two definitively American holidays—July fourth and Thanksgiving. No other country can claim our nation’s birthday and even though fall harvests have been celebrated around the world for millennia, no one does Thanksgiving like we do.

Food aside for the moment, I love Thanksgiving because it crosses every boundary I can think of. Geographic, racial, economic…It is like Christmas lights, but that’s a different blog post. It doesn’t matter if you are first generation or if you are a descendent of Squanto, (the Native American who resided with the Wampanoag tribe and helped the Puritans adapt and survive in the land that would become the United States.) On Thanksgiving Day, you will probably slow down for at least a few hours and enjoy a meal with someone you love (or are connected to genetically or by marriage.)

Ok the food got into that at the end. I’ll just say it. The other reason I love Thanksgiving is the food! Duh!

I guess you could say I am a foodie. I don’t much care for that term, but it is better than gourmet (expert cook) or gourmand (expert eater).

Thanksgiving differs regionally around the country. On the east coast, oyster stuffing is traditional, a throwback to colonial days when the mollusks were cheap and plentiful.  Southern cooks typically prefer cornbread stuffing. A throwback to...well it is just good—and if anyone says it is too dry, that’s what gravy is for!  I suppose there is someone out there touting oyster-cornbread stuffing but living in land-locked Dallas, those thoughts don’t even cross my mind.

I have never eaten Thanksgiving in New Mexico, but I’ll be there are some green and red chiles incorporated. You get the idea; people use what is available and regionalize the traditional with their local or their own epicurean traditions. I feel it is this aspect that makes Thanksgiving so great.

Listen to Red Belly Radio to learn more about what Thanksgiving means to four Southwest Airlines Employees. On this episode, I sit down to talk with three co-workers. Bill Owen, Whitney Eichinger, and I discuss some of our traditions and why we love the holiday and Olga Romero chimes in with some traditions of her homeland, Puerto Rico. Can you guess which one of the four is going to make mofongo?

We also discuss the history of this holiday. Did you know that Florida and Texas can lay claim to Thanksgivings decades before the “First Thanksgiving” in Plymouth? Or that after decades of Thanksgiving being held on the last Thursday of November was moved to the fourth Thursday as a financial stimulus?

For you “Foodies” out there, be sure to read my blog and to tune in to Red Belly Radio next week, when the discussion moves to the food and recipes! You’ll eat it up!

Photo: Balloon Pilgrims from one of the Communications Thanksgiving feasts!

blusk
Not applicable
Okay, I listened to the podcast, and now, I am hungry. What are you gonna do about it, Steve?
9 Loves

sheaser
Not applicable
I'll be by with several bags of peanuts molded like a turkey.
10 Loves

stove
Not applicable
Besides the food, you forgot one of the biggest Thanksgiving traditions - Dallas Cowboys' football!! Our family schedules our meal before the game so you can get good and full. Then, halftime is the perfect time for dessert! Go Cowboys!
9 Loves

Victor_the_Bori
Not applicable
One of my co-workers was asking me what goes into Mofongo and I told him that there is a Place on the Island that sells nothing but Mofongo at all hours of the night, not exaclty sure where, but I think its in Manita...
9 Loves

sheaser
Not applicable
Now THAT'S a specialty store! Next week's blog will list a recipe for it, along with about 20 others. I have a feeling you can find a recipe if you Google mofongo.
10 Loves

Justin_Sachtleb
Not applicable
Tasty post. I thoroughly enjoyed your post and share your love for the delicious food that we are both thankful for. (i love the TurkeyDay) I hope that everyone makes Mofongo (my reason for visiting PR 8X a year)
10 Loves