I Was There And I Can Prove It

I feel I am really moving up on the podcast food chain. I finagled my way into interviewing Wolfgang Puck and Tom Colicchio but now I am moving into the big leagues because on this week’s Red Belly Radio I interview baseball legend Nolan Ryan. Unlike the first two names mentioned, I don’t even know if Nolan cooks—but who cares? He struck out 5,714 batters and threw seven no hitters in his 27 seasons as a major leaguer.

I don’t know how many people could get into the old Texas Rangers baseball stadium, but I have a feeling Nolan has heard from more than that number that “They were there.” Well for all you people who drove by during that game and claim to have been there—I REALLY WAS! 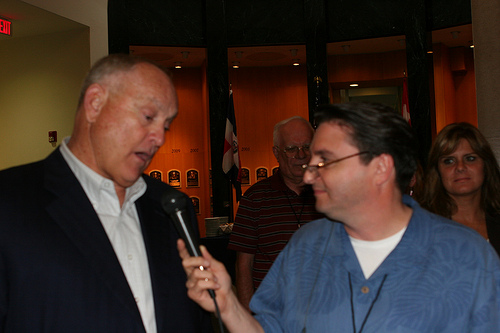 My friend Matt called me up and asked if I wanted to go to a game. The date was about two weeks out and there was really no way to predict the pitching order to have seen Ryan, but we just wanted to go to the game. On a beautiful evening in May, 1991, Toronto could not get a single hit against the Ryan Express.

The feeling of being part of an event like this is indescribable. They teach in journalism school never to use absolute terms such as “A good time was had by all” because unless you actually ask everyone, you can’t say that accurately. But in this case—EVERYONE in the stadium had the feeling of being part of history. No, I didn’t ask everybody, but just trust me on this, I could tell.  No one wanted to leave, and when we finally got out of the stadium, no one wanted to leave the parking lot. And when we finally drove off, thousands of fans were lined up on the streets high-fiving strangers and honking their horns. The adrenaline rush was unforgettable—and that was from a fan!

What is it like to be the pitcher of a working no hitter? Listen to this week’s episode of Red Belly Radio to hear Nolan Ryan tell how the team treats you in the dugout during the final innings of a game like that.

I don’t play the state lottery very often but I can prove that I have a winning ticket in the baseball lottery!

Pic: Top—My no hitter ticket stub signed by Nolan Ryan. Bottom—Me interviewing Nolan in the Baseball Hall of Fame for this podcast.

blusk
Not applicable
Steve, thanks for sharing the interview with Nolan, and thanks to him for the fantastic year the Texas Rangers are having! Just one question--why didn't you ask him about snow monkies. Brian
9 Loves