Because it’s the season to be jolly, we Spiritistas have made it a holiday tradition to feature cocktails in December. I mean, how could Spirit magazine not have spirits? This year we get you in the mood for the holidays with tiki drinks—you know, umbrella drinks like Zombies and Planter’s punch. According to our tippling correspondent, Sarah Murphy, tiki bars are in again. Three high-profile pubs in New York alone are serving tropical drinks now, and you can order from a menu of 200 rum varieties at San Francisco’s Smuggler’s Cove. So put on your very best Hawaiian shirt if you’re flying Southwest this December.

Regular readers know that, along with the purely fun, we like to serve up a meaty non-fiction narrative about someone who isn’t famous but deserves your attention. This month we profile Carolyn Stern, a physician who happens to be deaf. Some months ago, Nat Reade told me that he had been looking into deaf doctors. He speculated aloud that there might be a story in it. “I wonder if one of them can teach us something about listening,” I replied, not having a clue what I was talking about. It turns out that Dr. Stern has a lot to teach the rest of us about listening.

Also in this issue: a personalized adventure in Nashville (make your own record for 15 bucks!); Life Apps on cold remedies; football watching; charities; our famous dollar-bill origami; and, of course the Numbers: 70 percent of people don’t mean it when they apologize. Everything in “The Twelve Days of Christmas” would cost you $87,403. And a soccer player runs six miles in an average game.


The thought of it makes me want an umbrella drink. 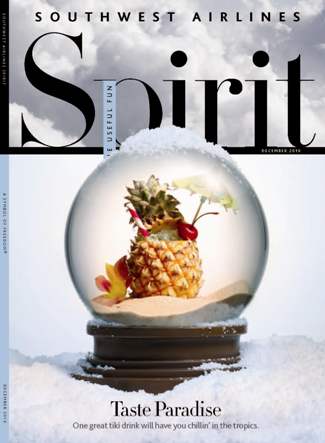