I don’t know that I’ve ever seen magazine editors have more fun than they did in making this issue--which, in a travel magazine for Southwest Airlines, is saying a lot. The main topic was “Learn New Tricks,” and some of the staff decided that they would take on the assignment themselves. That’s why you see Associate Editor Noah Bunn kicking a football on the cover. Noah’s many talents do not include football, I’m afraid. So he went to pigskin powerhouse SMU to learn how. You’ll have to read the story to see how he did. 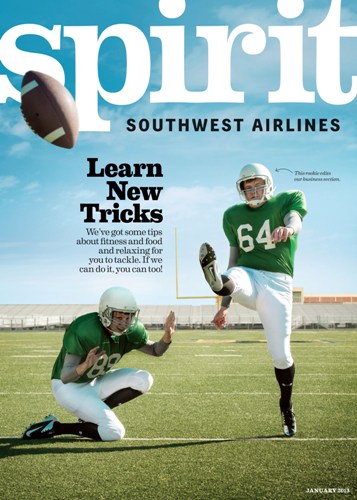 It’s funny to think of these young ‘uns learning new tricks. That’s normally reserved for old dogs, right? So what new tricks would you want to learn? Put them in the comments below.

Speaking of youngsters, you’ll want to read about the SparkTruck, a vehicle that looks like an ice cream truck and cruises across the country bringing science fun to kids. Any vehicle with a laser cutter has to be cool, and this truck--the brainchild of eight Stanford grad students--has that and more.

And now for the numbers: Facebook processes 2.7 billion “likes” a day. Using firmer pavement in roads would save $15.6 billion in fuel costs each year. And snack recipe this month is for bacon caramel corn. No, that’s not a number. But really, you have to try it.

The Bad, the Good, and Paying Attention

Changing of Flights and Horrible experience with Customer relations!!