We at Southwest’s inflight magazine, Spirit, like to think our stories have at least as much heart as any other. This issue is no exception. It’s chock full of heart, starting with the cover story: “The Heart of Darkness.” We flew Megan Feldman, a Denver-based journalist, to Los Angeles to meet a pair of remarkable men. Seventeen years ago, Ples Felix’s only grandson murdered Azim Khamisa’s only son. The shooter remains in prison. The father and the grandfather now travel the country teaching forgiveness at school assemblies, and they work together on the Tariq Khamisa Foundation, named for the victim.

The men inspired Megan so much that she hopes to meet other forgiving people and write a book on forgiveness. “If to err is human and to forgive divine, how do we access that divine power?” Megan asks. I hope she learns the answer and writes the book.

So how would you illustrate a story like that? What would you put on the cover? Our art staff went straight to Adam Vorhes, a contributing photographer to Spirit and one of the most talented people I know. He hired a bird wrangler to shoot some doves—photographically, that is. Adam also brought in a model to live a single white dove from among a flock of dark ones. That picture opens the story. The cover itself? The white dove, wings outstretched. 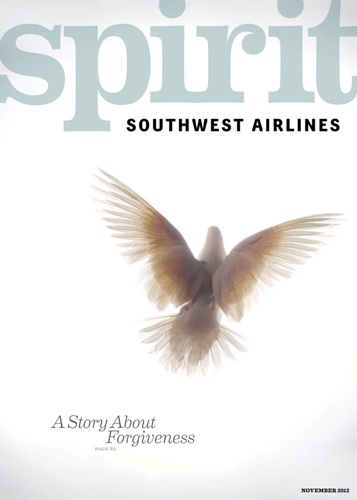 We went in the opposite direction with another feature story, sending Peter Heller on a cruise. Pete is the last person I’d expect to take a cruise. Author of the bestselling novel The Dog Stars, he’s also written books on whaling, extreme kayaking, and surfing. Would cruising be too tame for this guy? Read “Man Vs. Mild” and find out!

And now for the Numbers: 24.4% of last year’s Black Friday shoppers lined up the night before. The nation’s top speed limit is 85 mph. And tomatoes have 6,760 more genes than humans. Will we humans ever ketchup?