Depending on your philosophy of life, the guy on the cover is either one of the luckiest men in America, or the least lucky. It says a lot about Patrick Waller that he puts himself in the first category. After 16 years of wrongful imprisonment, DNA evidence set the man free. How would you feel?

The theme of this issue, Second Chances, explores new leases on life. In times like these, we need to be reminded that America is the land of try, try again.

I keep hearing from readers who say they’re surprised by the sorts of stories we do in Southwest’s inflight magazine. Where are the celebrities gushing about restaurants? After all, our last few covers showed a service dog, a veteran with post-traumatic stress disorder, a new American citizen, and an exploding sandwich.

Actually, we do put celebs on the cover now and then. (The mail on Brad Paisley reminded us of how “fan” comes from the word “fanatic.”) But we find people like Patrick Waller at least as interesting.

And not just him. Also a well-to-do woman from Houston who finds a new life in Marfa, Texas. Also Senior Editor Mike Darling’s Uncle Sam, who’s fighting a joyous battle against multiple forms of cancer. Also a guy who misses a chance to connect on a plane with the love of his life, and then gets another chance. Also Nelson Mandela, Lance Armstrong, Steve Jobs, and Tina Turner—comeback champions, every one. You’ll find them all in this issue.

I like to tell writers that our best stories make people laugh, then cry, then hug the stranger in the next seat. (Being an untouchy-feely New Englander, though, I kind of hope my seatmate hugs the person on the other side.) When so much of the media devotes itself to scaring its audiences, demonizing enemies, and fetishizing celebrities, we’d like to offer a temporary oasis from all that. One that makes you feel good about humanity for a while.

Sort of the way a certain airline does it. 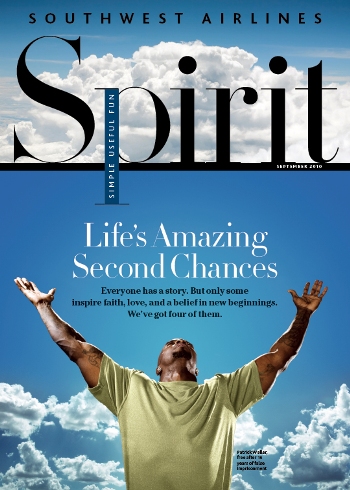 Stan3
Not applicable
This was an inspiring story.
7 Loves

Rhiannon_Hood
Not applicable
This story made me cry, I tried to find a copy of it and have been unlucky, would you be able to help me get a copy? It would be most appreciated!
13 Loves