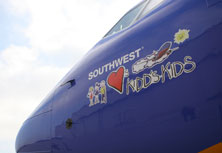 This episode of Red Belly Radio actually began back on October 2 with a telethon to raise funds to send a number of families with special needs kids to the Disney parks in Orlando Florida. Listeners of the Kidd Kraddick syndicated morning radio show pitched in and called a phone bank where volunteers took donations.

Southwest Airlines manned that call center and later flew the families of these special-need kids to Orlando for four days of fun at the Disney theme parks. Before the flight, we hosted the families in one of our hangars where they were treated to food and drink. 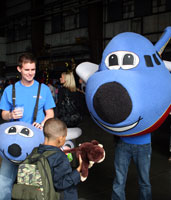 This marks the 17 year for the Kidds Kids charity and the third year that Southwest Airlines has been involved. More information can be found at kiddskids.com.

swafan08
Not applicable
Hey SWA was wondering if the Scheduling planning office could add new cites to a airport that swa is already at and that is Washington dulles!!!!
9 Loves

Any Southwest FAs? Curious on the in person interview process!

Applying as a Referral, profile became my Referrals profile

How do I get to the Flight Attendant Portal page