LUV Has Arrived in Greenville-Spartanburg

I feel like I blinked, and the whole weekend was over!  But, what an amazing welcome from the Upstate—the celebration of Greenville-Spartanburg as our 70th destination was certainly a weekend I will never forget. 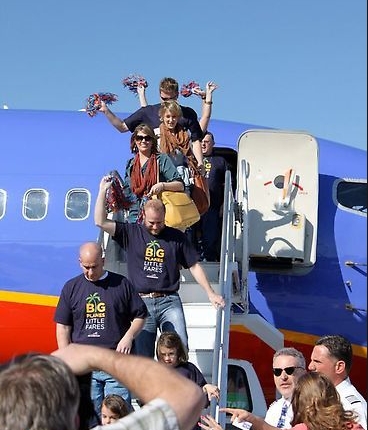 Hundreds gathered at Greenville-Spartanburg International Airport (GSP) on Saturday, March 12, to watch our ferry flight nearing the runway, filled with Employees ready to spread the LUV at GSP!   I looked around and saw the crowd smiling and cheering to see Southwest Airlines landing at their airport.   Upon landing, our red belly was met by a water arch and a sea of new Southwest friends and family in the Upstate community.

To kick off our arrival, we hosted a plane pull with Jeremiah Dew from the Greenville Drive as our Emcee.  One thing I learned quickly—the Upcountry doesn’t mess around when competition is involved.  When we first told the Chambers of Commerce in Anderson, Greenville, Greer, and Spartanburg that we wanted them to compete head to head to see who could pull our 83,000 pound Boeing 737 in the fastest time, they immediately started trying to one-up each other.  These folks have never seen a plane pull, but they did know they wanted to win.  Remember, I told you that the Upstate takes competition seriously?  Well, I wasn’t kidding.  The Spartanburg plane pull team recruited football players from Wofford College and beat out the other teams by five seconds with a time of 16 seconds.  Unreal.  But, all walked away with two roundtrip tickets for their local Chamber of Commerce, a fancy trophy, and bragging rights to say they competed in GSP’s inaugural Southwest plane pull.

Saturday evening, the celebration continued in downtown Greenville, which I affectionately call, the Paris of the South.  More than 50 local community members, social media peeps, and our brand new GSP Employees were given the red carpet treatment in four downtown restaurants—Rick Erwin’s, Larkin’s on the River, The Lazy Goat, and The Nose Dive—to get a taste of the signature pairing each has to offer.  At the end of the night, we all gathered at Barley’s Taproom to toast a wonderful night and give away roundtrip tickets. 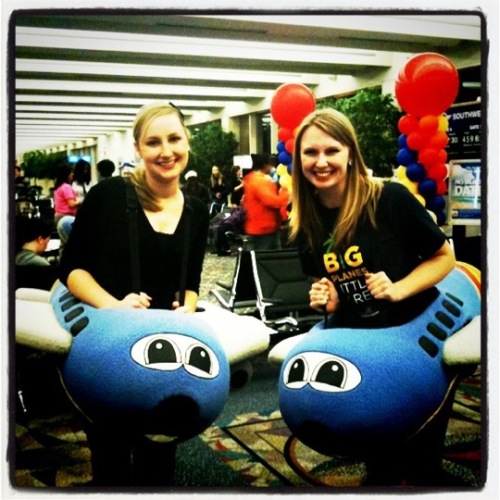 Sunday morning we were all up bright and early to send off our first flights with breakfast, coffee, massages, and, of course smiles, for every plane and every Customer.  GSP’s new Station Manager, Brian Williams, did a tremendous job leading his Southwest Warriors for a memorable first day of service.  More fun on our first day—a group of locals headed to Chicago Midway on our first flight for a day trip just to experience some authentic Chicago-style deep dish pizza.  Many of them told me they spent a lot more on pizza and beer than their airfare on Southwest! 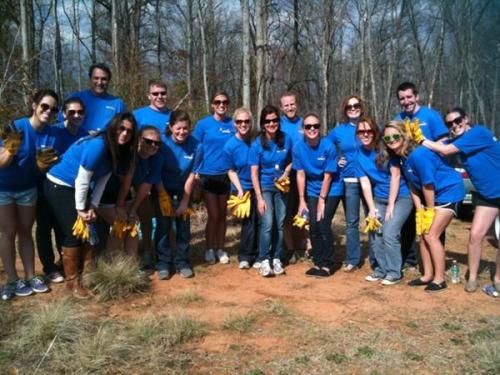 Our Employees Shared the Spirit Sunday afternoon with a tree planting at the airport entrance in honor of Mr. Roger Milliken, who had such a passion for the Upstate community and was a strong advocate to bring our Boeing 737s to GSP.  Mr. Milliken was GSP’s only Chairman since its inception in 1959 until his passing last year.  After the ceremony, Employees split up into two groups to head to Greenville and Spartanburg counties to show our deep roots by planting trees in local parks. 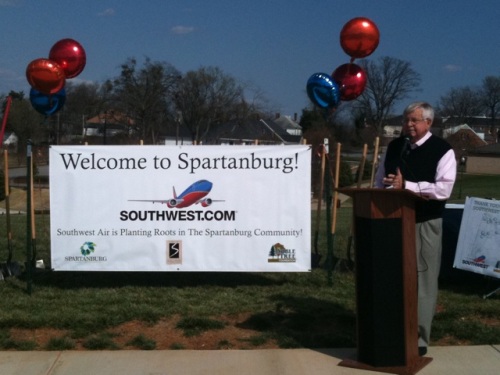 Our Chairman, President, and CEO, Gary Kelly, and Ginger Hardage, our Senior Vice President Culture and Communications,  joined us Monday morning at the airside garden to officially kick off our new service at GSP.  The Clemson University mascots and cheerleaders joined us for the celebration, and, just like they kick off all of their home football games with the tradition of running down the grassy hill toward Howard’s Rock for good luck—also known as the 25 most exciting seconds in college football, we shared in that tradition with about 20 Southwest Employees led by Clemson cheering: 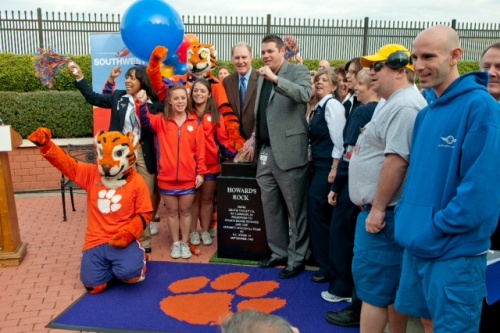 What a weekend—and what a way to kick off an amazing partnership at 30,000 feet.  As you watch this video, you’ll hear the stories of a community who wanted the freedom to fly.  And, now they have it.  If you are like me, the passion and energy you’ll feel from the folks who live and work in this beautiful region of the county will give you goose bumps.  About 30 seconds in, I find myself saying out loud each time I watch this—it gets me every time.

I’m already counting down the days until my next visit to the Upstate.  This place certainly has a special place in my heart.