Laughter is the Best Medicine

Pilloo was a dog with such a personality you would swear he was human.I open my eyes and realize I'm sitting at Denver airport (great airport) in the Southwest terminal. I've been here before, but this time I've just left my tight-knit family after having said goodbye to my dog Pilloo (which means baby) who came into our lives 18 years ago.

Pilloo was a dog with such a personality you would swear he was human. He was there for the birth of my now 15 year-old brother and the death of my grandfather. He outlived other pets and was there for major milestones from my first homecoming dance to me becoming Valedictorian of my journalism program in grad school.  He passed before I could make it home for the holidays, and before coming to the airport, I had finally pushed myself outside to his grave to say hello and goodbye.  Eyes closed, I was trying to stifle tears when I heard shrieking and thudding coming from in front of me.

Snowballs were being hurtled upwards and smashing into the windows overlooking the tarmac. Little girls were sticking their tongues out and yelling ,'YOU CAN'T GET ME' and then THUD, another snowball would hit the window. People began to get up from their seat to look at who was throwing the snowballs and there he was--an Employee who in between work, would hurl snowballs at the window.

My flight to LAX had been delayed and the mood at the gate was one of general annoyance, but as soon as everyone saw the pure joy and delight experienced by both Employee and girls the mood began to lighten.

It has been a tough year for a lot of people either personally, politically, financially, etc., but for a moment, we all were those girls. We were all kids enjoying the moment and the snow and casting our problems aside for just a moment. And I thought, God--if only there were more moments like this. Moments where we put aside differences and act like humans, the world might be a better place.

I wanted to share that moment with others in the hope that if they too were feeling down, hopefully this moment could offer them a modicom of joy that it brought me. 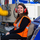 Laughter truly is the best medicine! Love this and Southwest's fun-LUving Employees.

Well done, SWA! By the way, this post was exceptionally well written - Bravo!