blusk
Aviator C
Gee, Kristen, I would imagine the biggest drawback to flying a dog airplane would be that the galley is always empty. However, on the plus side, there are plenty of lavatories up and down the street. Please give Kolby a pat on the head from me. Brian
7 Loves

Anonymous4625
Explorer C
WOW! I want to work for southwest some day and I would like to have one of those costumes for my dog
6 Loves

Anonymous4052
Explorer C
Wow, a flying dog. My Mother dressed her dogs up as well. One as the devil and one as an angel. Very cute. I think if I tryied to dress up my dogs they would eat the costume. LOL
7 Loves 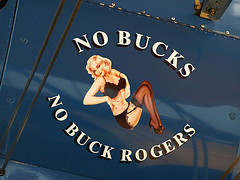 hangarqueen
Explorer C
Love it! Or should I say LUV it? Reminds me of an ill fated Airbus costume my ex and I made for Hallowe'en contest one year. Should have stuck with Boeing I suppose.
6 Loves