Looking for "The One" 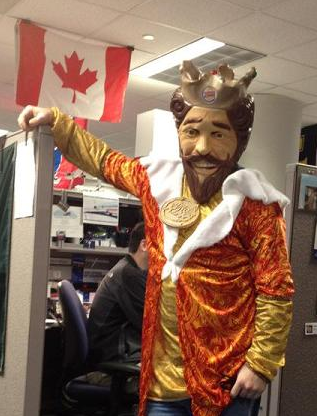 Early in the morning, the hotel elevators start buzzing to life and slowly the lobby fills with men and women on a mission.  Some are talkative and some are downing cup after cup of the last legal stimulant, trying desperately to convince their minds that it is later than it actually is.

At approximately 8 a.m., the doors open to an enormous banquet hall where dozens of tables are arranged equally spaced from each other in rows.  There are chairs on each side of the table, a pitcher of water, and a sign designating the table number.  On one side of the room there is a projection screen with a logo and the word “Welcome.”  Jackets are lint-rolled one final time, ties are straightened, and one more look in the mirror confirms that all are prepared to put their best foot forward.

People look at their schedules, find where they are supposed to be, and take their places.  Suddenly the projection screen changes from “Welcome” to a clock that counts down from 30 minutes.

And they’re off!  Each hoping that at the end of their 30 minutes they will walk away with a match… (or at least prospects for a match).

What I have just described could describe any number of speed dating or networking conferences that hope to link the lonely to someone who matches their specifications, but the above is actually the start of an air service development conference.

Several times a year, airlines and airports attend conferences that might resemble speed dating sessions to the casual observer.  Representatives from airports around the country (and the world) line up to convince incumbent airlines to add more routes or frequencies and convince new airlines that they are the best choice for their next new destination.  The airports can use their 30 minutes however they choose, but most have put together detailed presentations outlining population and income statistics for their region.

Airlines like Southwest are constantly examining cities (both within and outside of the existing route structure), looking for opportunities.  Since business and social dynamics for cities and regions are constantly changing, a lot of research is required to ensure that our airplanes are being utilized optimally and we are not missing any opportunities that the competition can capitalize on.  Attending conferences like Jumpstart is a way to touch base with current Southwest cities and potential newcomers.  Information about population density, income of a region, and business developments is taken back to Southwest headquarters where it is further researched and can become part of the case for adding service to a city.

So why would airports spend the money to travel hundreds of miles to attend meetings that are only 30 minutes long with airlines?  Simply put, because a community’s level of air service sets the tone for many other factors that, when they come together, lead to the economic prosperity of a region.  Cities with links to dependable, low-fare air service are more likely to have thriving business communities, and that can mean millions of dollars to the regions they support.

This month, representatives from Southwest Airlines’ Network Planning Department will attend the 2012 Marketing & Communications and JumpStart® Air Service Development Program in Sacramento, Calif., and again dozens of airports will try to convince the delegates that they are “the one."  So who will come away as a “match” for Southwest Airlines at this month’s conference?  We’ll have to wait for upcoming announcements to see.

Piotr_Rolek
Not applicable
I am truly inspired, this story is a crystal goblet in a world of dixie cups.
14 Loves