Calling all patriotic and kindred spirits to attention!  In celebration of Armed Forces Day, Southwest has joined with the Armed Forces Foundation, The Palazzo® Las Vegas, and Omaha Steaks to salute our nation's wounded veterans from San Antonio Military Medical Center with several days of entertainment, dining, and relaxation in Las Vegas during a special “Salute the Troops” celebration.

This is the second year that Southwest has linked hearts and hands with the Armed Forces Foundation and the Sands Corporation to provide leave for more than 80 deserving Wounded Warriors and their guests.   Their liberty began early this morning when they arrived at the San Antonio Airport to a cheering crowd that greeted them like the superstars they are.   For the next few days, these Wounded Warriors will enjoy a break from hospitals and doctor visits to enjoy fun times in the Vegas sun.

May is Loyalty Month for Southwest, so it seemed the perfect time to show our deep appreciation to those who have shown such loyalty to our Country and its citizens by fighting for our freedoms.  As the celebration for these heroes continues, we’ll update this blog with stories and photos from the events.  So, be sure to sneak a peek often, and don’t go AWOL!  Because, after all, sometimes what happens in Vegas gets posted here!

Thursday, May 17 – Saturday, May 19 | Celebrating the Wounded Warriors

Sally Harbeson, Southwest Airlines Charitable Giving & Community Relations Employee, also had the privilege to participate in this event and show her appreciation to this group of Wounded Warriors.

Reflecting back on the Salute the Troops event 2012, I am left with some distinct thoughts.  Most of these patriots are young—way too young to have seen what they have and way too young to deal with the aftermath.  But the lasting impression is of their fierce loyalty, both to this country and to each other.  The brothers who served together, and look after each other.  The two “now best friends” who in their words were “blown up together” and are helping each other heal.  All of these brave men and women who, even if they do not know each other, are visibly protective.  And lastly, their willingness and openness to share with those of us who truly have no idea what they are going through and making us feel like part of their family.  I salute you all, and will be inspired by your tenacity to overcome hardships on a daily basis.  Simply put, thank you.

My Southwest heart is still overflowing from the amazing experience with the Armed Forces Foundation and Sands Corporation during “Salute Our Troops” 2012!  Beginning with the Troop’s arrival and the water canon salute, a police escort to the Palazzo, and the glorious red, white, and blue decorations and entrance lined with a cheering crowd, each Veteran was greeted to a flag waving and patriotic salute!

The Veteran’s next few days were filled with scrumptious meals, generous gaming, spa treatments, and other unique moments, including a performance by the Blue Man Group, which was a true “vacation” from the reality of doctor visits and hospital rooms that these special guests so richly deserved. 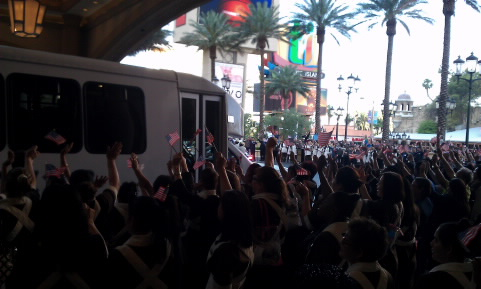 The Salute Our Troops experience was a vivid reminder of why I appreciate all U.S. Troops and their families.  As we celebrate the upcoming Memorial Day Holiday, please join me to recall the words of our National Anthem.  As it plays in our hearts, let’s sing along and send our deepest gratitude and respect as we salute all who have fought so bravely to protect our Freedoms.

Wednesday, May 16 | On the Ground in Vegas

Our Wounded Warriors landed in Vegas mid-morning, and were met with a water cannon salute before arriving in the gate area to receive an amazing welcome from a sea of Customers and Employees. 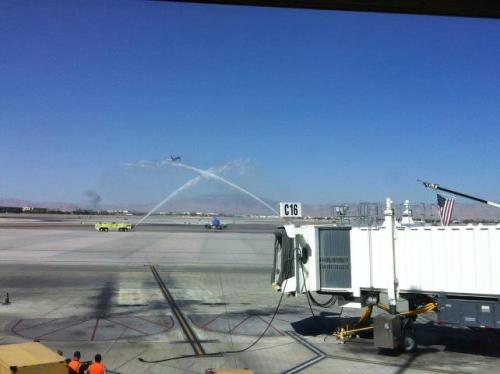 The Wounded Warriors arrived by police motorcade at the Palazzo Hotel and were again greeted with the cheers of more than 400 Venetian and Palazzo team members before arriving in the resort atrium for a grand welcome ceremony. Students from the Adelson School Campus sung the National Anthem while the Nellis Air Force Base Honor Guard presented the colors. Executives from Las Vegas Sands, Southwest, Armed Forces Foundation, and Omaha Steaks addressed the crowd as well as NASCAR driver and local resident Kurt Busch.  Our Customers, Employees, and all of the partners participating certainly know how to let these troops know that we all hold a special place in our heart for those who so bravely sacrifice themselves to serve our country. 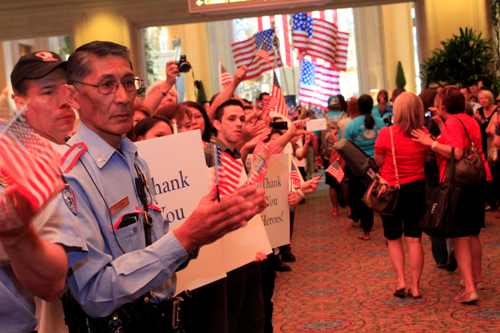 Kati Tucker, Southwest Airlines Charitable Giving & Community Relations Employee, had the opportunity to celebrate these heroes in Vegas, and is forever changed by her interactions with the Wounded Warriors.

Having been raised in an incredibly patriotic family, I've always been stirred by a love for the red, white, and blue. I could always smile proudly as an American and sleep soundly in my bed knowing I was safe and protected.  But recently, that thinking has changed a bit for me, as I have a brother who serves in our military.  Things are more personal now

As I look at these 45 men and women who have laid it all on the line and think about those who cannot be here with us today, it stirs my entire being.  I can no longer just smile proudly and sleep soundly, but I am now moved to take advantage of each and every moment because THEY paid the price for my freedom to do so

I count it an honor to get to take part in an event like Salute Our Troops. I am privileged to spend time with some of our nation’s heroes; with men like LCT Dexter Sadler, who not only volunteered but fought to be deployed after 9/11 because he wasn't the "traditional age."

I was also blessed to meet a gentleman named SPC Christopher Levi who is in Vegas for the first time ever, and who I was able to witness take his first swim in a pool since he lost both of his legs.

Being a part of an event like this changes your perspective forever.  So to the 45 heroes that I'm blessed to spend time with today, to the husbands, wives, sons, and daughters serving all over the world, and to my brother, thank you for your service! 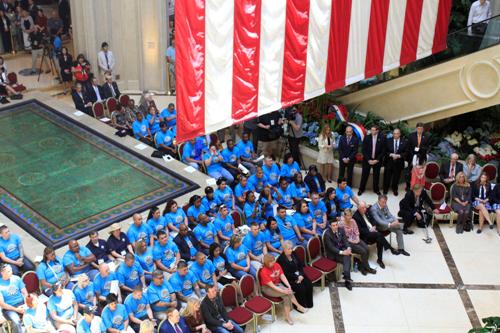 Dorathy
Not applicable
My husband is 62 a 100% disabled vet from Vietnam and I am trying to see how we can honor him with luxurious trips like this?
17 Loves