My Own Lands of Lincoln

Back when I was a kid (yeah, we had cars and television then), we celebrated ’s Birthday on its actual day, February 12, and Washington got his due on his actual birthday on the 22nd.  There was no convenient, generic “President’s Day” that always falls on a Monday.  It’s really a shame we got away from that tradition of honoring each of these Presidents individually, especially today since it is the 200th anniversary of the birth of one of our greatest Presidents, Abraham Lincoln. Of all of our great Presidents, Lincoln is my favorite, hands down, and I have had three encounters with “Abe.”

On my first trip to Washington, D.C., I was a snotty-nosed, know-it-all junior in college.  I was visiting my roommate from school who was an intern at The Washington Post, and my flight arrived about midnight.  Mike met my flight at Dulles Airport, and on the way to his place, a basement apartment in Georgetown, we passed by the Lincoln Monument.  We stopped and got out.  It probably wasn’t the smartest thing to do at one in the morning, but it is my fondest memory of that trip.  The monument was deserted, and Lincoln’s eyes seemed to follow me as we climbed the steps.  In the quiet summer night, I could feel Lincoln’s presence in the open-air room, and it was both eerie and calming to feel his aura.

A few years ago, my wife Tina and I fulfilled one of my ambitions—to visit Gettysburg.  That sacred spot in Pennsylvania represents service, sacrifice, and reconciliation.  It was a cool spring day, and everyone at the Visitor’s Center was anxious to get out and explore the battlefield under the gloomy skies.  Tina and I instead walked across the street to the spot where he gave the Gettysburg Address.  I had the same feeling as I had in Washington many years before that Lincoln was with me.  It was easy to imagine him on the dais where he wasn’t even the primary speaker.  Yet, his humble, brief address is what we remember about the event.

The third encounter came just a year or so ago while on a train passing through Springfield, Illinois, the state capital where Lincoln became a national political figure.  Of course, the city probably looks nothing like it did when Lincoln was practicing law there, but it was easy to picture him walking down the street.  Springfield just looks like the kind of place a President should call home.

Even though today isn’t an official holiday any more, try to take a moment out of your busy day to reflect upon the life of this great American.

kim-seale
Active Member
Brian, Your excellent post probably isn't getting as much attention as it deserves because of some current aviation events that are on the minds of a lot of folks right now, but I wanted you to know that it resonated with me and that I appreciate you sharing your "Lincoln moments". I, too, have been a life-long Lincoln buff, and can remember my visit to the Lincoln Memorial in Washington as a very surreal experience as well. Having seen photos of that structure all my life didn't prepare me for its size or elegance, but what really struck me was the solemn reverence that existed inside. I can't imagine standing in front of that seated statue and not feeling such deep awe for a man who shouldered some unbelievable stress and responsibility at a time that he was also personally enduring great loss in his own family. Although our family visited Springfield and a "Land of Lincoln" tourist site when I was a young child, I do not remember much of it other than the fact that we went there. But, that early experience must have kindled an admiration and respect for our 16th President that has only grown over the years. Indeed, Abraham Lincoln books are probably the third or fourth most common subjects in my personal library. You may have already heard that the first of the four new designs for the reverse of the Lincoln penny was issued by the Mint today in honor of Mr. Lincoln's 200th birthday, and the other three will follow throughout the next twelve months: http://www.usmint.gov/mint_programs/lincolnredesign/ Thank you again for reminding us of what an amazing man President Lincoln was and of the legacy he left us. Happy Birthday, Mr. President! Kim CRBB
7 Loves

blusk
Aviator C
Thank you Kim. It is amazing the way the mood changes once you enter the Lincoln Memorial. The artist did an amazing job of capturing Lincoln's strength, his sorrow, and his burden in marble. You wouldn't think an edifce made of stone would seem so warm. And, you are surrounded by probably the two greatest and most significant Presidental speeches ever, The Gettysburg Address and the Second Inaugural Speech. One other Lincoln fact: He was the major proponent of the transcontinental railroad.
9 Loves

kim-seale
Active Member
Brian, That is very interesting! In all of the books I've read about Mr. Lincoln, I had never seen that about the railroad. I think two of the things that I MOST admire about President Lincoln, which I am always reminded of when going through the hubbub of an Election Year, are his deep humility and his self-effacing humor. Isn't it a delight to discover truly great people who don't seek to gain fame and honor for themselves, and who take their jobs, but not themselves, seriously? Wait a moment...maybe that is one of the definitions of a truly great person? The more I read about him, the more I get the sense that he would be very uncomfortable if he knew the status to which people like you and me have elevated him. I suspect if someone had suggested to him that the government put his likeness on a coin, on a piece of paper currency and build a giant monument to him, and that school districts around the country would name schools after him, he would have been shocked. People who truly have a servant heart are humble individuals. Of course, the more I reflect on his determination to save this country from itself, and his passionate drive to restore and heal the nation, I think that would qualify as a warrior spirit. And, if you study his interaction with his children and his friends, no one could deny that he had a fun-loving attitude. Hmmm, go back and capitalize a few of those words and tweak the spelling of the hyphenated one, and what do you get? :-) No wonder Mr. Lincoln was awesome! So, in addition to "Happy Birthday, Mr. President", maybe I should say, "we LUV you!" Kim Blogger and Lincoln admirer
12 Loves 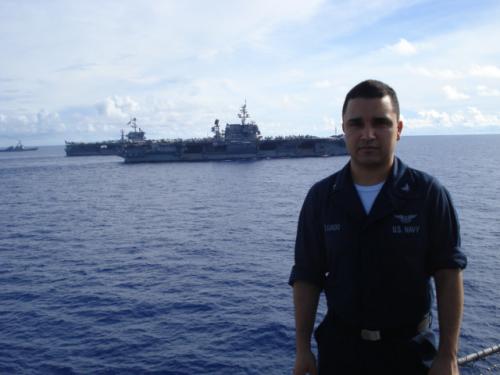 kikodelgado
Explorer A
Thanks for the post on President Lincoln. He was a true leader and a patriot. Happy Birthday Mr.President Francisco
12 Loves

Jessica11
Explorer C
Brian - As I was reading through your first two "encounters" with Lincoln, I was hoping you'd get to Springfield. I was born in Springfield, IL - The Land of Lincoln - and grew up going to Lincoln's Tomb and Lincoln's home for field trips in school. I can vividly remember each and every trip and truly cherish the opportunity to be so close to such a special part of history. My Dad is a history (specifically civil war) NUT and emerses himself in ridiculously long books and documentaries about all historical topics ---but especially Lincoln. Conversly, history has never been my "thing," but somehow, I think that Lincoln is a man/historical figure that holds a special meaning for everyone...Have you ever been asked the hypothetical question "If you could invite anyone in the history of the world to your dinner table, who would it be?" Lincoln would be among the first to receive my invitiation.
12 Loves

blusk
Aviator C
Jessica, I'd have Lincoln on the short list too. He has always seemed so human to me, which is kinda weird when you consider he lived before motion pictures or radio. At least we have his photographs. From your description of your field trips, it sounds like history might be your thing! I think it's unfortunate that history is taught in such a dry manner that bores people. Brian
13 Loves