My Trip to Boston, Thanks to the Phoenix Suns

I was sitting in my first-hour Social Studies class, when my teacher Mr. VanBriesen announced I had won a trip to Boston! One month earlier, I had entered the Southwest Airlines, Phoenix Suns "Symbol of Freedom" Art and Essay Contest. I had spent the second week of my Christmas break working on it and now, I knew it had all been worth it. When I heard that the topic was a "Symbol of Freedom", I knew I wanted to do something that honored our veterans. The title of my artwork is "Freedom in Full Bloom", depicting Arlington National Cemetery with a large cherry tree blooming in the center. The tree was the only thing in color, the rest is black and white. I did this to symbolize the freedom blooming from the soldier's sacrifice for us. I could not believe that at the beginning of March, I would be going to Boston! 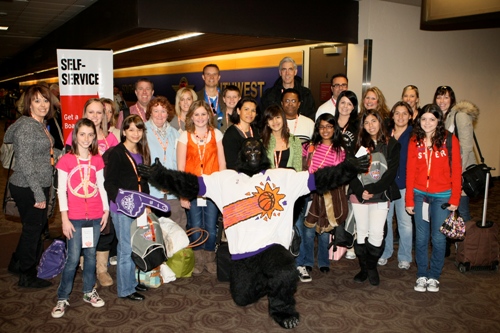 This morning we left for Boston. When we arrived at the airport, Southwest and the Phoenix Suns had really gone all out for us. The Suns Mascot, the Gorilla, was waiting for us. We each got our picture with him, and when my mom posed with him he picked her up; it was so funny. The Southwest people treated us like celebrities. We got our own checkin, and they made an announcement about us and hung up our artwork in the airport. Then we got to board first. We had a great flight there. I've never had a Flight Attendant who sang. She was so fun and had a great voice. She said she was from Chicago-- thanks Ms. Sharon.

Today, we went on the Freedom Trail. You follow a red brick line that goes through the whole city, marking each site. The tour guide dressed up like a colonial person and talked in a British accent. There was so many amazing sites to see including: the site of the Boston Massacre, the Old and New State Houses, Faneuil Hall, and Granary Burial Ground. Then in the afternoon, we went on the Duck Tour. We couldn't go in the water, because the ramp was broken, but we got to ride around in it and get a tour of the city. The guide was really interesting. That afternoon and evening we had free time and walked through Boston Public Garden and down Newbury Street, the Rodeo Dr. of Boston. We also went to the oldest (and very beautiful) library in Boston, Boston Public Library. Then, my mom and I had dinner at the Barking Crab. It was so good!

We started out the day at the Old North Church which was where the Sons of Liberty hung up the lanterns to signal which way the Redcoats were coming. It was so cool inside. There were chandeliers and booths instead of chairs. Each family had to purchase a booth and could decorate it however they pleased. Next, we went to Paul Revere's House. As the tour guide was taking us through the 300-year old home, she said Paul Revere had 16 kids. Their house was so small I wondered how they could fit their family in there. After that, we had lunch in the North end and ate the best Italian food I have ever had. We also went to Mike's Pastries, because all of our friends told us it was so good. (Which it was!) That night, we went to the Phoenix Suns vs. Boston Celtics game. It was so fun even though the Suns lost. We each made a poster and got tons of Phoenix Suns gear. They also showed us on television while at the game. After it ended, we got stickers that enabled us to stay after the game. We got to meet some of the Suns players and get autographs and take pictures. It was so awesome!

Today we flew home. I can't believe our trip is over.  It was great making new friends, and hanging out with the other winners. Everyone was so nice. Seeing Boston and all its history, going to the game and meeting the coaches and players, everything was incredible. Laura, from Southwest and Devney, Megan, Chris, and Alvin from the Phoenix Suns were awesome. They planned one amazing trip! Thank you, I will remember it forever!