Forty eight thunderous feet created a human drum roll, as I unsealed the envelope and announced that the New York chapter had received a coveted achievement award at the annual OCA Chapter Awards luncheon.  And with a party mix booming in between award presentations, the high energy luncheon was a great way to kick off a very special Saturday.

Southwest was the official airline of the four-day OCA “Get out to Las Vegas, Get Out the Vote” National Convention August 2-5.   Based in Washington, D.C., OCA (formerly called Organization of Chinese Americans) is a national nonprofit that aims to embrace the hopes and aspirations of Asian Pacific Americans (APAs).   I not only appreciate what OCA National has contributed to the APA community over the past 39 years, but I applaud their leadership in standing up for what is right and building coalitions around issues affecting APAs.

Just this year, OCA has been working hard to fight harassment in the military, racism in the fast food industry, and anti-Asian political rhetoric.  More recently, OCA showed its solidarity with the Sikh community after the tragic shooting in Oak Creek, Wisconsin and asked that we all work as a community to cultivate tolerance for all.

Over the years, Southwest has worked alongside OCA to accomplish many things together.  From supporting OCA’s efforts to help the New Orleans fishermen community after the Gulf Coast oil spill, to giving wings to various youth and leadership development programs, Southwest has been proud to partner with OCA.

To top off the exciting day in Vegas, Southwest was honored to receive the “Corporate Partner of the Year” Award.  As OCA President Ken Lee said, “On behalf of OCA and over 80 chapters and affiliates across the United States, we are pleased to recognize Southwest Airlines for their continued support and commitment to advancing the social, political, and economic well-being of Asian Pacific Americans.” 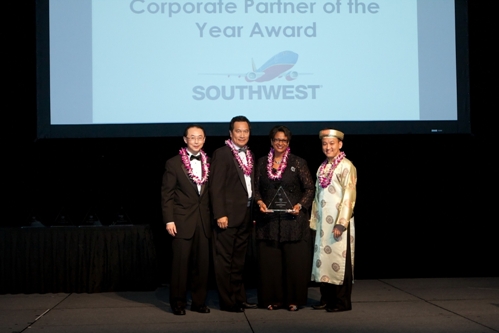 In my opinion, the real winning moment for Southwest occurred when Vice President of Diversity & Inclusion Ellen Torbert and I were sitting at the pre-Gala reception. Two summer interns named Christina Phan and Harris Leung introduced themselves and graciously thanked us for flying all the interns to the convention.  After we had talked about how much FUN we’d all had at the Chapter Awards Luncheon, Ellen asked them if their internship had been a good one so far.  Harris immediately replied, “No…it was life-changing.”

His sincere words melted our hearts, and I got a little choked up.  With bright eyes and a beautiful smile, Ellen commented, “Isn’t that what it’s all about?”   I couldn’t agree more.

Thank you OCA for not only for honoring Southwest, but for also nurturing tomorrow’s leaders.  OCA is doing an extraordinary job in getting our young adults involved within their communities and opening their eyes to the challenges that the diverse APA community continues to face. We are ALL winners for it!