Off the Clock: For the LUV of the Game

At Southwest, we are known for our unique Culture and Fun-LUVing Employees.  And believe me when I say that they are as interesting off the clock as they are when they are working!  In fact, we often spotlight Employees and their hobbies in our Employee magazine, LUVLines.  Here's one just in time for tonight's opening ceremony in Sochi. 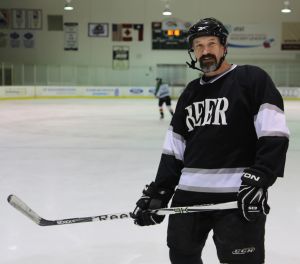 As an Arkansan, I didn’t learn about hockey until I enlisted in the Air Force.  There we a bunch of guys from “up north” who loved the sport and it eventually rubbed off on me.  As my skills improved, I graduated from street hockey to ice hockey in my early 30s.  Some of my Fellow Mechanics played in recreational leagues and I would join them for practice after my shift.  Eventually, I felt strong enough to join a team and have been playing ever since!
OTC_Feb_2014_LL ‏408 KB
7 Loves
3 Comments