As many of you may already know, Southwest Airlines has developed a unique partnership with a nationwide non-profit organization that provides service animals free of charge to those in need. Southwest has given Canine Companions for Independence the opportunity for all of their service dogs in training to fly with us as if they are fully-trained service animals—allowing Canine Companions volunteer puppy raisers a chance to fly without a pet fee. Thanks to our Frontline Employees the partnership has been an incredible success.

After researching Canine Companions for a blog post earlier this year, my interest in getting involved with an organization that my Employer also supported started to grow. In March, I was invited to attend a tour of Canine Companions’ newest regional facility, the Kinkeade Campus, in Irving (about 10 minutes from SWA HDQ)—where I completely fell in love with the organization and knew I had to get more involved.

As a non-profit organization, Canine Companions relies almost entirely on volunteerism from supporters. Volunteering for Canine Companions takes on many different forms, from monetary donations, to time spent at puppy spa sessions (bath time!) at a regional campus, puppy raising, breeding, and beyond. I felt called to immerse myself in Canine Companions, so I decided to make the ‘sacrifice’ of raising one of their puppies from eight weeks old to two years old.

Volunteering as a puppy raiser is an enormous commitment, as you devote almost two years to developing a growing service animal, teaching it basic obedience and service commands, socializing it in preparation for being a service animal, and generally spend 24/7/365 with a dog that is not your ‘pet’. It also required a lot of buy-in from my significant other and family, my Department and Executive Leaders, and essentially the entire HDQ and TOPS staff (as the pup is expected to come to work and be socialized in workplace environments as well). So, after the initial decision, multiple sign-offs from everyone we’d encounter, and an intensive application process with Canine Companions, we welcomed Otto to the (Southwest) family!

Having an infant/toddler puppy at work is certainly a privilege, but I assure you it’s not always fun and games. While at work and donning the Canine Companions service vest, Otto is considered a ‘working dog’ and is expected to follow basic behavioral and social rules while on the Southwest campus. We spend time learning about new environments (Carpet! Elevators! Stairs! Meetings! People everywhere!) and practicing commands in distracting environments. Otto has mastered sit, down, shake, wait, stand, let’s go, and hurry (which mean go to the toilet on command, outside). He must also have appropriate play behavior during our structured play time each day, and of course napping—his #1 skill right now.

Having a service animal in training at work hasn’t just been a win for Canine Companions, but it’s also help set Southwest up for success in the work place. We will be better prepared for an Employee with a service animal working at HDQ and TOPS; Employees will already be familiar on how to interact with a working service dog and relief areas will have already been established.

Although having Otto present at work each day may be a one-time opportunity, there are Employees across the network who also are involved with Canine Companions, including volunteer puppy raisers in workgroups like Tech Ops and Flight Ops! You don’t have to be a puppy raiser to get involved either, there are opportunities at each region across the network (for Texas’ South Central Region, consider North Texas Giving Day or DogFest Walk ‘N Roll—Team Otto).Just visit cci.org to find your nearest region and find out about opportunities for you to get involved.

I hope you enjoyed this post; the first in a quarterly series about Otto’s time at Southwest. Stay tuned for future installments of the “Otto-biography”—including some written by Otto himself!

Welcome to the Canine Companions family!!  Although I haven't had the occasion to fly with my puppy in training on Southwest yet, as a fellow puppy raiser I'm thrilled that SWA affords is this opportunity.

And I think it's awesome that you have fully embraced CCI's mission. Thanks to you and to SWA! 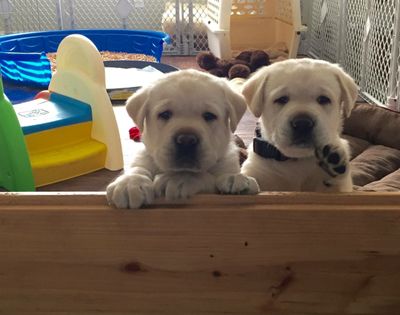 I had the privilege of whelping Otto and raising him and his siblings for the first 8 weeks.  This is Otto (left) and his sister Oralee. I am excited to see the partnership between SWA and CCI grow, and I look forward to reading more Ottobiographies!

Welcome Otto and family!   Will look forward to reading all about your adventures.

And thank you Southwest.  I needed to go to Burbank to pick up a donation for Canine Companions and I asked to bring a pup in training so all present could learn a little more and see first hand the work being done by these pups as they go through the first stage of training.

Flying down on Southwest was wonderful.  We were prepared with paperwork needed and check in was easy.   Reka made a great impression at the event and everywhere else we went and she slept all the way on the trip home.

Welcome to the Canine Companions for Independence family!  I'm a longtime puppy raiser and truly enjoyed reading this blog post.  Best wishes to Otto and all that have a part in his puppy raising!

I am currently raising my 6th puppy for Canine Companions, and I had never taken a puppy on a plane with me until recently.  Canine Companions had a leadership conference in California, and our puppy was old enough and well-behaved, so we brought him along.  Everyone at Southwest, from the customer service representatives on the phone to the crew on our planes, was wonderful.  Newton had a great experience, and learning how to handle travel at a young age will help him if he becomes a service dog when he's older.  We're so grateful for the partnership between Canine Companions for Independence and Southwest! 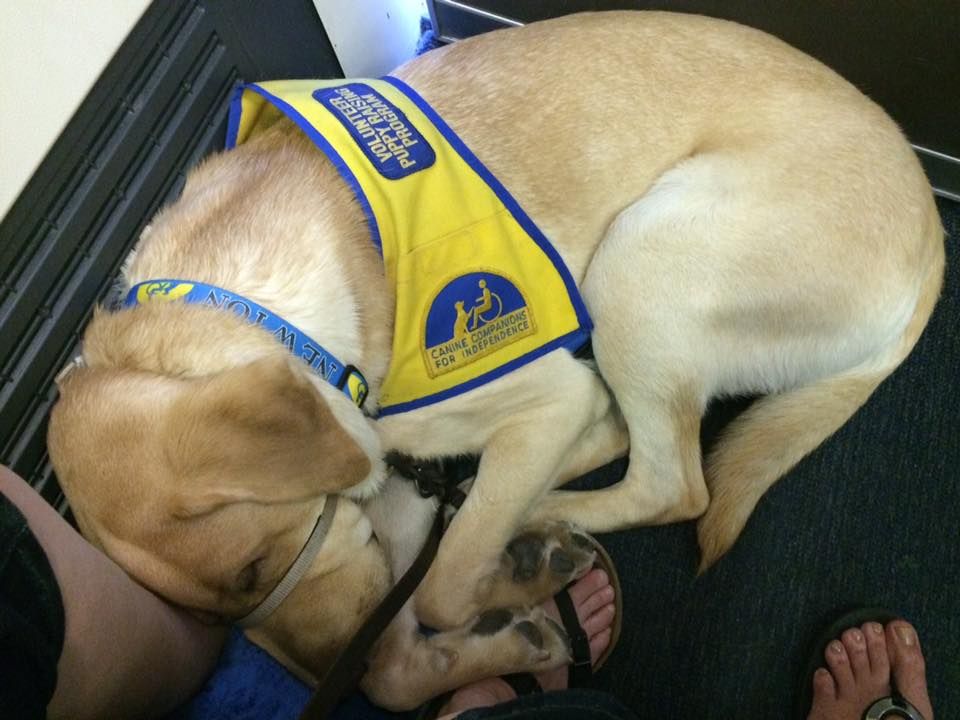 Thank you all for the support! We are happy to be a part of the Canine Companions Family now, and @smspupraiser I just love seeing that picture of Puppy Otto with his sister--he was so SMALL!

@puppyraiserjen, I am so glad that Newton was able to fly with us, and it looks like he made himself right at home! Great to hear how accommodating the staff were on your first flight with Newton--as well as with @Crisgerard on your flight.

Yay! Welcome to the CCI family!  This is such exciting news that there's a puppy in training at Southwest HQ!  The first time I saw the email from CCI that the pups were allowed to fly, I almost cried.  I was a little stressed out about finding a sitter for Desta over the holidays and instead she got to come to Texas with me and meet my family!  I fly Southwest almost exclusively and Desta and I visited Texas, Portland and Seattle all because of this partnership.  I'm now raising my 2nd pup and can't wait for him to start flying (once he's old enough!)  Thank you Southwest for believing in the program and allowing our pups on the planes!  It means a lot to me! 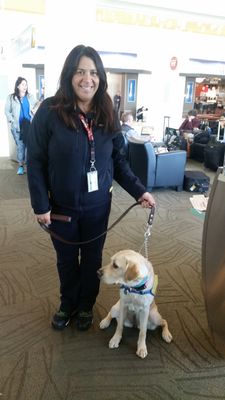 Desta and Donna our gate agent 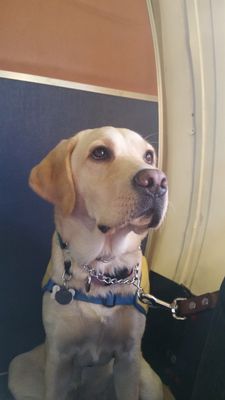 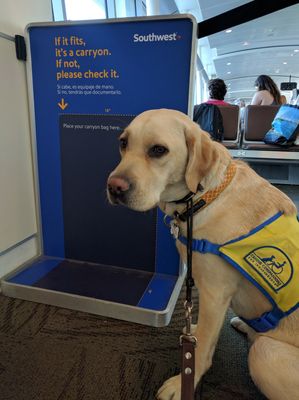 One of Desta's many flights

I think it is great that this airline is allowing CCI puppies in training to fly, but what about all the other organizations that have puppies that would benifit from this type of exposure? I have raised 20 puppies for different organizations and I find it a bit unfair that I am not allowed to fly with my puppies because they are simply from an organization that is not CCI. Would you please consider allowing puppies from other fabulous organizations the same privilage as you do CCI puppies?