Owning it During Spirit Week

jfrakes
Not applicable
I didn’t notice anything out of the ordinary when I arrived at work on Monday morning.  It seemed to be a typical day here at SWA.  As a new Intern on the Customer Support & Services (CS&S) Team, I haven’t been here very long, but Employees roaming the halls adorned with Southwest garb and greeting one another in passing seem to be frequent occurrences.  It wasn’t until I walked into the CS&S Department that I realized something about this day was different.

There was a flyer posted on the door that said the day marked the beginning of Spirit Week!  Employees were encouraged to wear different Southwest colors each day to represent various Company goals and initiatives.  Oh no! I immediately remembered receiving an e-mail from our Department’s Culture Ambassador highlighting the week’s events, and I was embarrassed that I had forgotten to wear my Southwest colors for the day’s theme—“Count on Me to Own It.”

I receded to my cube, hoping not to catch any grief for my lack of participation.  It’s so unlike me not to participate in things of this sort. “Maybe it won’t be that big of a deal,” I thought to myself.  Turns out they take SOUTHWEST SPIRIT pretty serious ‘round these parts.

One of my Coworkers soon came into my cube and asked me if I could hold a sign for our Department’s skit for the cheer competition.  I quickly obliged, hoping that it would offset my lack of spirited attire.  She told me to meet in the conference room in about 20 minutes so I could join them in rehearsal.

After spending some time learning the lyrics and moves to the CS&S Team’s Southwest rendition of “Shake Your Tail Feather” by the Blues Brothers (I guess that’s where Nelly got his inspiration…?), we were road ready.  I couldn’t believe I was about to shake my (rhythmically challenged) tail feather on stage before a spirited audience.

And then it was show time.  I stepped out of the elevator on the first floor and walked into a scene of complete chaos.  The energy was contagious. Employees from all departments were waving pom-poms and cheering like it was fourth down during the last minutes of a closely fought Texas high school football rivalry game.  I glanced to the right to see Gary Kelly looking on in amusement. 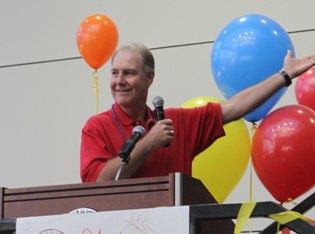 I thought, “What in the world have I gotten myself into?”  Corissa Neal (my fellow Intern and partner in crime) and I exchanged nervous glances.  Here goes nothing …

The CS&S Team met in a conference room outside of the lobby with the other departments participating: Cabin Services and Customer Relations.  It was decided that we would be the second group to perform. We received a quick pep talk from one of our spirited coaches, Vivian Palmer.  She reminded us that Customer Relations was the reigning champion, and we had to give it our all to win. 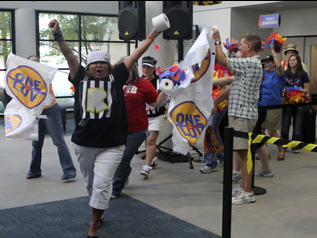 Customer Relations was the first team to perform.  We stormed the stage once they’d finished, determined to outshine the competition.  We hollered, jumped, and shimmied just like we had practiced, but the excitement from the crowd boosted our energy and made things flow far better than before. 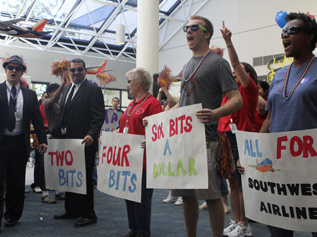 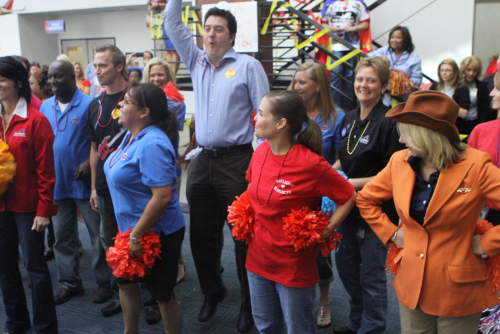 We knew we nailed it, but the other Teams were impressive as well.  After the third and final performance by Cabin Services, it was up to the judges to decide the winner.

Following a few minutes of deliberation, the winners were announced.  To our astonishment, we had come out on top!  We did it!  CS&S won!

The news was met with high-fives and congratulations between our group and the other members of the competition. 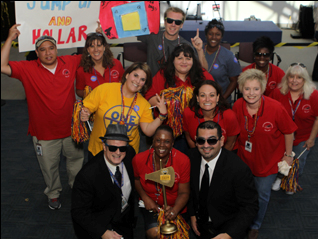 All in all, I think it is fair to say that it was a fantastic experience for everyone.  Our Team posed for a picture with our first place prize: a Golden Plunger.

Although Spirit Week technically only comes around once a year, my observations thus far—including my experience in this competition—prove to me that Southwest Employees most certainly show their Spirit in everything they do.
183 Loves