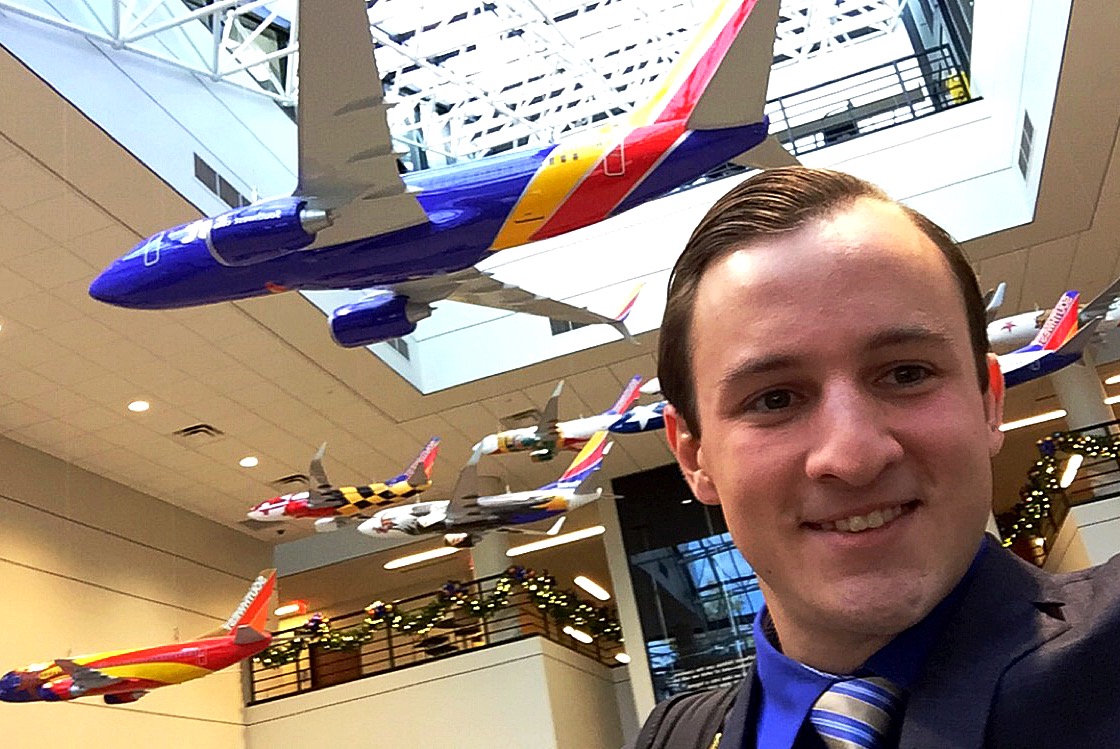 Southwest Airlines' largest spring Campus Reach College Intern class to date descended upon Love Field Drive this week, and I’m so excited to be among them. My dad, Jason, is an Las Vegas-based Flight Attendant (by way of Ground Operations). Thanks to my dad working in aviation, I’ve had many opportunities to sit in the flight deck of a Southwest Boeing 737, and I knew from an early age I wanted to be a Pilot at Southwest. And, thanks to Southwest, I’m another step closer to reaching my goal. In 2013, I received the Kelleher/King Scholarship—and that, in addition to this internship experience, is going to make a big difference in helping me make my dream a reality.  In May 1981, Southwest Founders Herbert D. Kelleher and Rollin W. King established a fund that annually awards scholarships to Southwest Airlines Employees and their eligible dependents to assist with their continued education at the college or university level and in an undergraduate program. I feel fortunate to be here. To fill this class, the Campus Reach Team received more than 8,022 resumes, and carefully selected 104 students, representing:   As all of us look ahead to a successful semester, perseverance is the most important thing. Along the way there will always be obstacles; the biggest obstacle I’ve had to overcome was being born deaf in both ears. What started as speech therapy led to a cochlear implant in my right ear when I lost all of my hearing by age three. After the implant, I quickly adapted into the auditory world and have been oral ever since. By the time I entered kindergarten, at age six, I was fully mainstreamed. By 5th grade, my desire to become a Pilot was in full flight, and when a magnet counselor came to my school to introduce the aviation program offered at her middle school, I immediately knew that’s where I wanted to be. In 9th grade, I went through a rigorous application process and was accepted into the aviation program at the Rancho High School Aviation Academy, where my elective coursework focused on Private Pilot and Aerospace Engineering. Attending the Aviation Academy has offered me a unique and practical introduction to a career in aviation. As my dream of becoming a Pilot emerged, many people would tell me I couldn’t because I was hearing impaired. I just became more determined. My parents instilled in me I could achieve anything through hard work and perseverance, but as my drive to become a Pilot grew, so did the nagging question of whether or not the FAA would allow me to fly. In November of 2011, I received my FAA medical certification, but was still haunted by the repeated questions if I would ever be able to hear out of my other ear. In response, I just received a second cochlear implant in my left ear. It’s still a long road ahead—I’ll have to go through intensive auditory verbal therapy to train my second ear to hear. But, I believe overcoming the obstacle of my hearing impairment has made me a stronger, more driven individual and has prepared me to overcome my next obstacle in this journey. The connections I made through receiving the Kelleher/King Scholarship led me to this opportunity as a college intern, and I’m certain this experience will only increase my excitement about a career at Southwest and fulfilling my lifelong aviation dream. 3
8 Loves